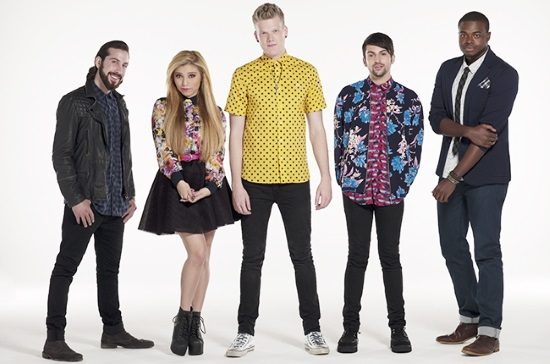 … one of the universe’s most vocally dynamic, ultra-hip, and eclectic acappella groups…

Opening the concert with Ariana Grande and Iggy Azalea’s “Problem,” the group automatically revolutionized the stadium and the way it deeply connected with its jam-packed audience teaming up with an intensely vibrant vocal percussion/bass to boot.  Transitioning into a clean-cut Destiny’s Child medley including “Bills, Bills, Bills,” “Survivor,” and Beyonce’s “Irreplaceable,” “Put a Ring On It,” “Video Phone,” and “Sweet Dream,” were just several numbers to name as the group vocally owned the split second timing between the songs with their tight-mixed 5 part-harmonies.  One of the Beyonce highlights of the night spotlighted a sun-kissed energetic rendition of “Halo,” blending into the Beyonce/Lady Gaga duet of “Telephone.”  Grassi’s richly angelic falsetto beamed throughout the entire version of Sam Smith’s “La La Latch.”

Another crowd-stopper included a pumped up execution of Clean Bandit’s “No Place I’d Rather Be.”  Maldonado added a fresh new vibe to the number with her pure, crystal clear vocals.  “We’re obsessed with you…you guys are my favorite crowd so far…!”  the sweethearts remarked after a few songs into the night.  In just a week after having competed and won the sing-off, Pentatonix was dropped from their label in which they proceeded to get back on the A-train by posting their rendition of Christina Aguilera and Maroon 5’s “Moves Like Jagger” on youtube.  Smart, smooth move as this number attracted their huge fan base.  It’s no wonder we fans are obsessed with these big open, warm, and multi-talented hearts in these loving souls.  “Thanks to you guys we won the grammy this year!” Maldonado exclaimed as she proceeded to discuss the group’s “happily ever after,” with Sony RCA signing them on in producing their latest release, “That’s Christmas To Me,” debuting #9 on Billboard’s Top 200 Chart and ranking #1 on its Holiday Chart.

Introducing his original piece titled, “Renegade,” the group’s beatboxer, Olusola stunned the audience with his heart-pounding beatbox and richly authentic musical blend on his cello.  If there were ever a hip-hop rendition of Yo-Yo Ma, Olusola would be it.

And that’s not all…the prodigal voices made their rounds through the mosh pit crowd as they sang their version of Paul McCartney and Rihanna’s “FourFiveSeconds.”   “You guys are fun!  Wow everybody is so cute!  Do you mind if I take a photo real quick?”  Grassi, the youngest member proclaimed as he uploaded his photos onto the group’s facebook, twitter, and instagram sites, which led the group into their next spine-chilling number of Arianna Grande’s “Break free.”

What better way to spice things up than with a cover of Bruno Mars’ “Uptown Funk,” smoothly fused into Marvin Gaye’s “Let’s Get It On,” as the gentlemen danced in-sync and searched in the audience for a beautiful woman to serenade.  After having belted into the stratosphere and singing to their Juliet,  (who apparently gives fantastic hugs, according to a few of the gentlemen), the group segued into one of their most dynamic and original song medley arrangements, “The Evolution of Music.”  Consisting of popular numbers including, “Boogie Woogie Bugle Boy,” “I Wanna Hold Your Hand,” “Respect,” “ABC 123,” “Thriller,” “Say My Name,” “I Want it That Way,” “I Kissed a Girl,” (just to name a few), and ending with “Call Me Maybe,” this explosive medley shook the entire stadium.  “Honestly, we’re just choir nerds,” they muttered under their breath before breathing a fresh new funky upbeat life into the trendy rendition of Daft Punk’s “Get Lucky,” as another highlighted standout number.

If you missed out on this so-called “just choir nerds’” ultimately transforming performance, just wait.  Recently Pentatonix announced their upcoming touring concert with Kelly Clarkson, which will make its way to the Wolf Trap’s Filene Center for the Performing Arts on September 12th and 13th .  This is definitely one to hit the books in concert series history.

Pentatonix was a one night only event on March 19th 2015 at the Patriot Center on the campus of George Mason University. The venue is located at 4400 University Drive, Fairfax, VA.