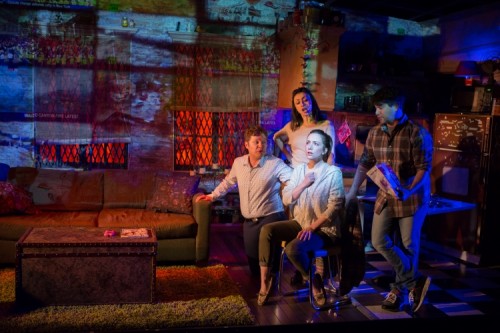 If you have a taste for the deliciously modern and totally relevant, go get your tickets for Soon, a dazzling new musical premiering at Signature Theatre, directed by Matthew Gardiner.

Charlie is a young woman having a passionate relationship with her couch. She would rather stay home and sit on the couch drinking in the apocalyptic end-times TV news and hiding away from the world than engage with her friends, family, or boyfriend. What would you do if you knew you only had a few months to live? Perhaps you, too, would hole up with your Jewish fish and let life wind its way around you…

…be prepared to for this zany production to zing you to the heart.

Soon is a devastatingly honest, brilliantly wracking production that stretches your imagination, engages your senses, and draws you into the story so deeply that you feel like you know the characters personally. There were moments of side-splitting laughter and loud guffaws and also moments when the audience was struck so silent you could hear the hairs on our necks standing, tensely waiting, before we let out our breath again.

Jessica Hershberg gives a painfully believable life to the character of Charlie as she navigates the end times, clinging to time and safety nets, paralyzed by the news and unable to participate in the life unfolding around her. Her faithful boyfriend, Jonah, is played as a true knight-in-shining-armor by Alex Brightman. If that guy were to sing “Waiting” outside my apartment door–end times or not–I certainly wouldn’t leave him stranded out there. He even passes the inspection of Charlie’s housemate, Steven, when, drunk and completely adorable, he demands to know what Jonah’s intentions are. Steven, played so delightfully by Joshua Morgan, is the best friend and housemate we all want to have. I just wanted to go give him a big hug and then crack a bunch of jokes with him after getting to know him through the course of the story.

And last, but certainly not least, we have to talk about Charlie’s mother, Adrienne. Played by the very capable Natascia Diaz, she gave what I found the most heart-wracking performance, being both her own troubled but deeply amusing self as well as a mother struggling to maintain a relationship with her daughter in the end times. And the woman can really belt out her numbers!

Being a musical, it is not possible to write a review on the show without commenting on the music. All four of the characters can sing beautifully, and I thoroughly enjoyed the harmony of their voices together as well as their solos. It was especially enjoyable to see the way that their characters both illuminated the numbers and were informed by them–the songs themselves were singularly perfect for the story and the characters, which is not always the case in musicals.

Nearly as intense a presence as the music was the lighting and effects in Soon. This was a technologically savvy production, and as a child of the computer age, I reveled in the use of lighting, sound, and projections that brought the end of the world into focus and simultaneously illuminated the heart of the story. I also enjoyed the way that the story unfolded, though the slipping in and out of time with back flashes at first confused me. The storytelling is so fast-paced that it took a scene or two for me to understand that present time action was being interwoven with back flash scenes to fill us in on missing information.

If you like theatre, which you probably do if you are reading this review, then you should hightail it over for your own viewing. But bring tissues and be prepared to for this zany production to zing you to the heart.