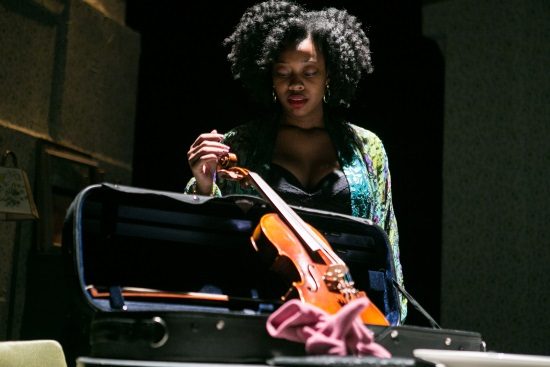 The story, in brief, concerns the disappearance of a prized blue viola, when the Chicago Symphony musician who owns it forgets it by mistake on the street. A sympathetic and scrappy street merchant, Vernon Addams, who sells all manner of junk for a living, believes this priceless instrument to be a kind of divine deliverance, and he embraces it like a newborn child. His sometimes girlfriend, Arnita Seward, begins to realize as well that the viola could be her ticket to a never-dared-to-imagine better life free from the relentless, cold hardship that defines the working poor. They quarrel and it ends badly. Arnita steals the viola and presents it like the Golden Fleece to her amoral boss Michael “Mikey” Stearns, a barely-above-water small businessman who owns South Side Cookies with the comically incongruous sideline of beef sandwiches. In one if the evening’s most humorous plot twists, Mikey takes the viola to be a Stradivarius violin, which he posits was made “like a hundred years ago in Russia.” The plot thickens, more fantasies float, more lies and bawdy deals ensue, and Mikey presents the viola—an inheritance from his elderly aunt he says—to rare instrument dealer Fritz Humboldt. In one of the opera’s most poetic exchanges Fritz sings a kind of elegy to the viola’s seductive eloquence and beauty in the shadow of its more celebrated sister, the violin. But, the best laid plans again crumble as reality prevails.

As Vernon, Jorell Williams brings wisdom and resonant integrity to the role, winning over the audience with his down-to-earth embrace of beauty and his glorious voice. As Arnita Alicia Olatuja realizes both the character’s hard-scrabble toughness and the vulnerability of one who dares to dream; her luxurious voice anchors the narrative’s quest. Keith Phares as the South Side business owner Mikey combines stage charm and selfish resolve to give his character a sense of daring; his clear, strong voice convinces the audience that all things are possible. The scenes between Arnita and Mikey crackle with sensuality and hope, neverminding the collateral damage. As the connoisseur of fine instruments Fritz Humboldt, Benjamin Lurye creates delightful levels of aesthetic purity and unlikely street smarts. His voice is both earnest and lyric. Throughout, the ensemble work of the cast and their voices, at once powerful and tender, underscored the intricacy of this contemporary short opera.

Featuring members of the Inscape Chamber Orchestra, the musical surround of the production delighted. Special applause to violist Megan Yanik whose viola solos conveyed the yearning and history of the lost blue viola itself. Musicians Natalie Spehar on cello, Ali Cook on bass, Evan Ross Solomon on clarinets, Christapher Wass on electric guitar, and R. Timothy McReynolds on piano embodied the complex and delicate music. Mingling musical forms from contemporary classical and new music to blues and jazz tones, the music by Peter Hilliard was both robust and evocative, with the libretto by Matt Boresi bringing subtly, humor, charm, and sorrow. As conducted by Artistic Director Robert Wood the production resonated with sophistication and precision.

Directed by Tazewell Thompson, Blue Viola synthesized the many elements into a lush, cohesive whole, much greater than the sum of its parts. Set and lighting design by Donald Eastman established the cavernous world of the Windy City with giant, rolling walls of boxes, evocatively lit. Costume Design by Harry Nadal, created a distinct sense of the unforgiving place and time, and anchored the production in an effective visual vocabulary.

A most accessible and charming new, short opera sung in English by UrbanArias, a new company making a considerable splash among audiences, funders, and the professional music world alike.

Running Time: 60 minutes with no intermission. A talkback follows each performance.