Theatre Review: ‘After the Revolution’ at Center Stage 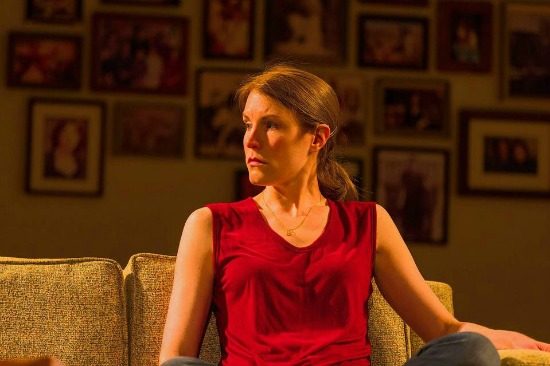 Ashton Heyl in ‘After the Revolution’ at Center Stage. Photo by Richard Anderson.

With a handful of plays and still in her mid-30s, Amy Herzog may be a slightly premature candidate for a festival of her work.

But Baltimore’s Center Stage has forged ahead nonetheless, presenting for the first time her interrelated plays After the Revolution and 4000 Miles in repertoire (and readings of two others). At its current Amy Herzog Festival, you can even order a preshow pink gin concoction called the Amy Herzog Fizz-tival.

Herzog’s work is well-known in D.C., where Studio has staged 4000 Miles and Belleville in recent seasons and Theater J put on After the Revolution.

After the Revolution had been Herzog’s first play to be produced in 2010, with a stellar Williamstown cast that included Mare Winningham and Lois Smith.

The dilemma is exceedingly well detailed and convincing…

It concerns a bright young law school graduate, who, to the enduring pride of her father, is continuing the family bent toward leftist politics, running a public interest firm bent on the case of freeing former Black Panther Mumia Abu-Jamal.

It’s all done in the name of her grandfather, an old Communist party member who earned fame by facing a House Un-American Activities Committee in the 1950s.

The more mainstream Uncle Leo isn’t as fervent as his brother’s family to all this revolutionary banner-carrying, but is nonetheless encouraging to his niece.

Then, almost instantly, word comes down that newly released book will disclose that grandpa may have been passing information to the Soviets way back in the day all along.

Some in the family knew this or surmised it, but it was never imagined by the idealistic Emma, who named her fund after the guy. This leads to some soul-searching and practical decision making: How does she immediately respond to her funders and others? How does she proceed?

It also means she has to rethink the pillars on which she’s built her life and especially the one she put her grandfather on. Most of all: How could her family have kept it from her?

She’s mad at her father for withholding this and refuses to talk to him. She starts to argue with her boyfriend who also works at the fund.

Yet her grandmother, even more than her father, is unwavering in support of what was done and tries to explain how times were different then and the Soviet Union was even an ally in World War II.

The dilemma is exceedingly well detailed and convincing, from personal family details Herzog is clearly mining. The dialog is natural, well-paced and sprinkled with humor helping to create a family worth caring about.

Ashton Heyl is very good as the struggling Emma, even as her bright enthusiasm makes way for a dulled depression. Ayre Gross is just as convincing as her activist father, well meaning but not above making mistakes. Susan Rome is good as a supportive stepmother who knows when to carefully step in. Mark Zeisler strikes a convincing tone as the uncle of another world but still supportive.

In smaller roles, Peter Van Wagner is a standout as a sympathetic donor; Alejandro Rodriguez steady as the concerned boyfriend. And Kelly McCrann develops a whole set of gestural communications that mark her as a convincing millennial.

Lois Markle does well in a tough role, as the grandmother who appears both resolute and frail — she can’t hear some things, and she won’t hear others. She will more fully flesh out the same role in 4000 Miles when it opens in April.

Lila Neugebauer is directing both productions; she keeps this moving quickly in and out of an effective Upper West Side set by Daniel Zimmerman that lays bare the exposed brick behind it. Brandon Wolcott’s sound design has scenes start with a sonic wallop.

The extent of the play’s central problem doesn’t seem to warrant two full acts, however; by the second, there was squirming in the audience opening night as if to say: Decide and get on with it. Some might wonder in the lulls whether a play about the Mumia case itself might have been inherently more dramatic.

And it ends with an exchange that doesn’t seem all that conclusive. You almost expect it to be followed, as in serialized TV, with scenes from next week’s performance.

In this case, though, there will be one, as the festival continues.

After the Revolution continues through May 17, 2015 at Center Stage, 700 N. Calvert St., Baltimore. Tickets are available online.