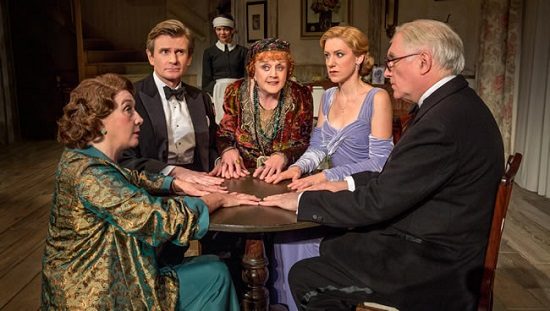 It was Percy Bysshe Shelley who wrote a poem called “To a Skylark” which began, “Hail to thee, blithe Spirit! Bird thou never wert.  That from heaven or near it. Pourest thy full heart. In profuse strains of unpremeditated art.” English playwright Noël Coward used this poem as inspiration for the title of a play about ghosts called, Blithe Spirit, now playing at The National Theatre through March 29th.

This is a must-see event!

Taking place entirely in the living room of the Condomine’s house in Kent, England, the play is about socialite and novelist Charles Condomine (Charles Edwards), who invites the eccentric medium and clairvoyant, Madame Arcati (Angela Lansbury), to his house to conduct a séance, hoping to gather material for his next book. His friends Dr. Bradman (Simon Jones) and his wife Mrs. Bradman (Sandra Shipley) are good sports and attend the séance.

The scheme backfires when he is haunted by the ghost of his first wife, Elvira (Melissa Woodbridge), after the séance. Elvira disrupts Charles’s marriage to his second wife, Ruth (Charlotte Parry), who cannot see or hear the ghost. Last, but not least, we have Edith (Susan Louise O’Connor), the nervous, wacky maid who is always in a hurry.

Legendary actress on stage, TV, and film, Angela Lansbury stars as Madame Arcati, the local spiritualist and medium.  Like her character Jessica Fletcher on TV’s Murder She Wrote, Madame Arcati doesn’t drive and chooses to ride her bicycle, even if it means peddling 7 miles to the Condomine home.   Madame Arcati is no fraud, but can she figure out how to return Elvira to the other side? In a career spanning over 70 years, Angela Lansbury is still full of vim and vigor, reprising the role which she first played on Broadway in 2009 where she earned her a fifth Tony Award.  It goes without saying that if you have the chance to see Angela Lansbury perform, take it!  She is a joy to watch!

The rest of the cast are no slouches either!  Charles Edwards is bright, sophisticated, articulate, and debonair as Charles Condomine.  Charlotte Parry exudes a sophisticated energy as Ruth Condomine, Charles’s second wife.

Credit to some of the most funny and memorable moments of the play go to Susan Louise O’Connor as Edith, the maid.  I won’t give away any of the surprises, but even the way she briskly walks and picks up a tray is outrageously funny!

Gray from head to toe, Elivra says to Charles, “Nobody but a monumental bore would have thought of having a honeymoon in Budleigh Salterton. I was an eager young bride Charles, I wanted glamour and music and romance. What I got, was potted palms, seven hours of every day on a damp golf-course and a three piece orchestra playing ‘Merry England’.” Melissa Woodbridge delivers an outstanding performance as Elvira, the ghost of Charles’s first wife who is spirited, outgoing, wild, and carefree.  What I like about her performance is that it seems effortless and natural, and dare I say supernatural!

Blithe Spirit is only playing at The National Theatre through March 29th.  This is a must-see event!  If you like Noël Coward’s sophisticated humor then you will love this production.

Running Time: Approximately Two hours and 30 minutes, with one intermission.