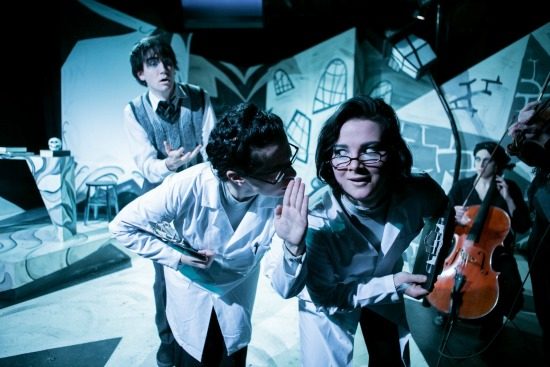 There could hardly be a more reverent salute to a great, twisted film than The Pointless Theater’s well-wrought Doctor Caligari, which brings the influential German expressionist film to life with the same jagged modernist angles, crazed paranoia and heightened drama.

More than that, the stage version directed by Matt Reckeweg uses the same monochromatic scale of grey to black scale of black and white film and is performed silent. That isn’t to say it doesn’t speak loudly, through its vivid action and especially the jarring, effective score by Michael Winch, an inventive violinist who performs it live on stage with cellist Madeline Waters and bassist Rick Netherton.

While taking a few liberties with the 1920 film, it follows the same innovative pattern, with one man telling another about his fear of a circus hypnotist who uses his sleepwalker (or somnambulist) to commit a series of murders. Because puppetry is a mark of the company, the somnambulist in this case is a big dummy, who opens his eyes as dramatically as Cesare did in the original.

As the murders come to life, in the shadows of a screen, the man is having less and less luck in trying to convince authorities (who appear to be apes in the cardboard puppetry of Genna Davidson). Eventually, of course, there is a twist in which the whole narrative is put into question.

There is something, too, about the black-eyed makeup and exaggerating acting that are true to silent film but also some kabuki theatre. The splendid cast throws itself into it all, with Frank Cevarich as the damaged, delusional Francis who conjures up this horror in his head, to Lex Davis as the maniacal doctor. Matthew Sparacino and Rachel Menyuk are also luminous in their roles, even as they join the ensemble of Zachary Fernebok, Lee Gerstenhaber, Madeline Key and Scott Whalen in inhabiting any number of citzens, passerby or curious spies — sometimes in the masks of Kyra Corradin.

It all works as a single (albeit warped) vision, realized by Patti Kalil’s set and prop design, Navid Azeez’s lights, and the overhead titles by Alex Leidy. Those are the only things that seem out of place on the set — appearing as they do on a shiny overhead flatscreen, which is at odds with the expressionist angles all around it, even though the lettering on it works.

The other problem with the titles is that they stay on so long, one forgets to look up to see the lines change. That may be because watching the actors in their singular fever dream is so compelling; their work on stage is almost more akin to dance than conventional performance, but that’s the same kind of distinction that usually found at the all-movement Synetic Theatre as well.

Fans of the original film, early 20th century expressionism and those fascinated by the psychological horrors of between-war Germany are advised to take advantage of the rare experience of being so close to the action, one is almost a part of it. It’s like having the same, weird shared fever dream.

Latecomers aren’t admitted at all, because you have to walk through the set to get to your seat (though I suppose if you were wearing stark white face powder and black eye makeup and had an crazy look on your face, they might let you through).