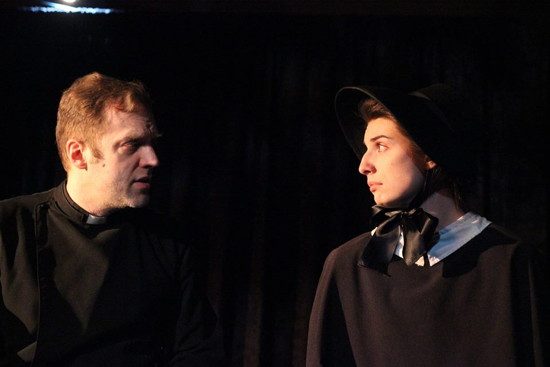 It’s a touchy subject – the relationship between a priest and a young boy. Nowadays, it’s the kind of story that makes most people uncomfortable. Yet that is just what John Patrick Shanley asks audiences to confront head-on in his seminal work, Doubt, A Parable. Made famous by the recent film adaptation starring Meryl Streep and Philip Seymour Hoffman, Shanley’s work asks important questions about truth and what it means to believe without proof. These issues are being tackled through March 15th by City of Fairfax Theatre Company.

Doubt is a complicated piece in that it hinges on a character who never appears. Donald Muller, the first black student in a primarily Italian and Irish Catholic School in 1964, is believed to be the victim of untoward advances by the parish priest, Father Flynn. The person making these accusations is Sister Aloysius, an older nun who takes hold of her suspicions and refuses to let go. Caught in the middle is Sister James, Donald’s teacher, who initially reports the suspicious activity and later repents. Donald himself never appears to confirm or deny the story, but his mother Mrs. Muller makes a startling testimony on his behalf.

…every element is well-thought-out and meticulously executed.

City of Fairfax Theatre Company is fortunate in its core cast. All three of the main actors give powerful performances. Chris Andersen as Father Flynn, Lisa Anne Bailey as Sister Aloysius, and Anna Fagan as Sister James all inhabit their roles with a kind of quiet power. All three bring a necessary element to the table that, when combined, create something beautiful. Andersen brings the charisma and charm that, for better or worse, his character can use to affect those around him. Bailey brings the strict, no-nonsense attitude of a nun with something to prove, whether to herself or others. And Fagan brings the innocence and enthusiasm of a young nun caught up in something she does not wish to understand. All three are comfortable inhabiting the small but powerful moments that give the show its simplicity and its resonance.

Making a cameo as Mrs. Muller is Brenda Parker. While it may be hard to leave a lasting impression in such a short amount of time, that is not a problem Parker faces. Rather, the role itself is written like a stick of dynamite, short-fused and explosive. The twist Mrs. Muller puts into the storyline is astounding, and Parker does not disappoint. She carries the weight of this small but pivotal role with aplomb. She has some truly beautiful moments onstage, and leaves a distinct impression.

The theater itself is in downtown Fairfax, in an open, industrial, loft-type space. While unfinished, it does have fantastic acoustics, which helps both actors and sound designers alike. There is some awkwardness for the company to deal with – the raised stage puts the actors fairly high above the audience, which can make visibility a problem. And the incense used, while effective in setting the mood, filled such a small space quickly, and gave one of the actresses a minor coughing fit. But aside from minor technical snafus with the incense and, at one point, the lighting, the space is well-suited for such an intimate show. Uniquely intimate, perhaps; one can even hear the performers warming up backstage before the action starts!

Doubt is in no way a frivolous piece. It is a serious work designed to make viewers question many things they take for granted. The City of Fairfax Theatre Company cast and crew, particularly director Ed Zakreski, should be congratulated for the impressive way they’ve staged this demanding show in such a simple, powerful way. From the technical aspects to each individual actor in the show, every element is well-thought-out and meticulously executed. It is a simple production of a simple piece, and that’s exactly the way it should be done.

Advisory: Subject matter may be unsuitable for children.

Doubt: A Parable is playing through March 15, 2015 at City of Fairfax Theatre Company performing at the Pop-Up Theatre in Old Town Village – 3950 University Drive, in Fairfax, VA. For tickets click here.