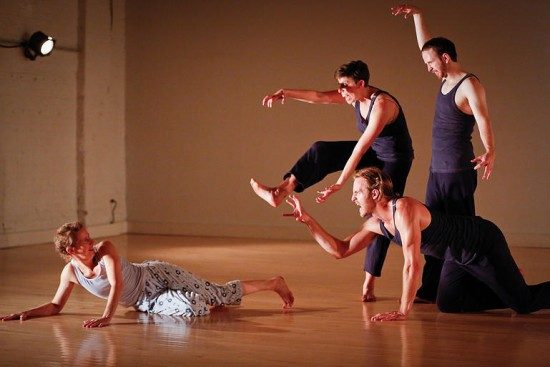 …Aura Curiatlas is returning to DC next year, so keep your telescope lenses polished.

They present a collection of ten mini-shows of their creation, each titled and of its own story which they depict with dance, acrobatics, theatre… and human sculpture in which they fluidly, constantly mesh, interlock, balance, tower, pivot, launch, crawl, swirl – to intense yet melodic, ever-changing music.

For example, there is “Seats” where the two men Plehal and Lonsdale dressed in bus drivers uniforms turn their upraised feet and arms into seats, armrests, seat controls which flex, elevate, descend, vanish, and collapse while supporting two outrageous ladies, Gavaler and Rabinovitz. Any moment, it looks like it’s all going to crash down, but that is just a tease.

Then there is Rapid Eye Movements about a sleeper (Gavaler) who is vexed by three sleep fairies (Plehal, Lonsdale, Rabinovitz) who shift from turning into a nightmare monster before, at story’s end, prancing away as clowns.

Also there are solo performances such as Infectious Mononucleosis in which Rabinovitz struggles to break free of her despairing symptoms and finally after much thrashing and mournfulness, dancing joyously revived. And there’s Gavaler’s Loonatic in which she’s restrained in a straightjacket of colorful elastic bands, which she ultimately defeats, and waddles goofily off the stage – a delightful and delighting “loonatic.”

And like a comet, Aura Curiatlas – alas! – is now gone. There were just two Washington, DC shows last week. They have upcoming shows in Williamsburg (May 9) and at Auburn University, Boston’s Green Street Studios and at a location yet to named in Chicago, dates to be announced.

Meanwhile, Aura Curiatlas is returning to DC next year, so keep your telescope lenses polished.

Running Time: An hour and a half with a ten-minute intermission. No violence or sexual content. Suitable for all ages.