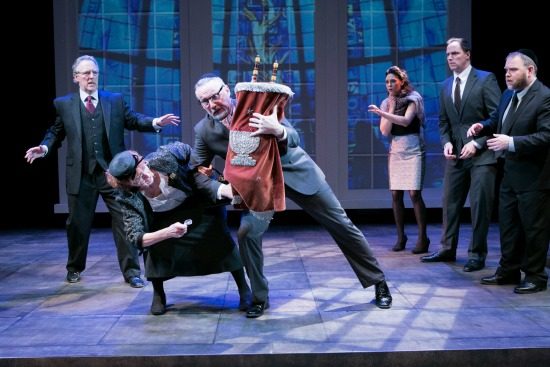 The cheery cast of the world premiere G-d’s Honest Truth promises, early on, a story that’s “Jewish but not too Jewy.”

Theatre J at the DC Jewish Community Theatre would be the place for such self-deprecating talk. And in a season already featuring the hit Bad Jews, here is another harshly funny tale of self-examination, faith and modern sensibilities.

From the start, the tale within a tale of Rabbi Dov is just a little too fantastical to be true. He’s been put in touch with a priest who found a Torah buried at Auschwitz, wrapped in the tattered clothes of its inhabitants. He’s willing to part with it for the D.C. Temple of successful couple Roberta and Larry but, like a shady real estate salesman, he mentions that there is another synagogue already quite interested. The price is driven up, and the Temple ponies up nearly $1 million for the honor of having such a solemn document. And already we distrust this swashbuckling holy man and archeology buff who calls himself “the Jewish Indiana Jones.”

A sharp comedy of  manners …

Part of that is because we vaguely remember in the back of our minds the story of a similar fraud that inspired the play, reported a decade ago on NPR, and five years ago in the Washington Post Magazine, that led to the arrest of a Baltimore rabbi who once compared himself to Indiana Jones and sits in a federal jail in upstate New York.

Renee Calarco’s smart and funny play goes a bit farther, when Rabbi Dov mentions at a Day School auction fundraiser, that he also happened to get his hands on a previously unknown diary of another Holocaust icon, Anne Frank, written in English yet, and the couple can’t drive up the bidding to $50,000 fast enough.

And while bemused viewers may have been skeptical from the start, there is never room for doubt in the minds of Roberta and Larry, who are trying to get their grown son married off and are in the middle of a lot of other things, including unnecessarily explaining every aspect of Jewish culture to an audience that doesn’t need it (although I did learn why God is sometimes written as G-d in ancient texts — the word itself is inadequate to contain all that it means).

Such explication will likely be more needed, though, when Calarco’s play goes beyond Theater J to be widely staged, as G-d’s Honest Truth has the same kind of air of contemporary America, where especially the privileged are so reluctant to question what they want to believe. Her sharp comedy of manners bring to mind John Guare’s similar story of delusion, cultural guilt and social commentary Six Degrees of Separation.

Besides the caper aspects, social observations and laughs, there are some theoretical underpinnings to the work as well that give it some ballast: What harm is done if stories are concocted that bolster our beliefs? Are we to believe every tale of religious tracts literally? Aren’t faiths built on shared stories? And finally, would they have donated $50,000 to the day school, as they claim, if they didn’t think they’d get something of value in return? They’re good questions to carry out when the curtain falls.

Calarco, the D.C. based playwright whose previous work has included The Religion Thing and Short Order Stories, gets the best out of her work in a ringing production at Theater J, with fast-moving direction by Jenny McConnell Frederick and a splendid cast led by the peerless Naomi Jacobson and John Lescault, the married actors who were just at Theater J in Aaron Posner’s Life Sucks (or the Present Ridiculous) are a joy to watch. She’s full of best intentions but stoops to carping; he’s full of patrician huffing and puffing, and is full of funny gestures to react wordlessly to her occasional excess.

Sasha Olinick walks the line between pious and a player as Rabbi Dov and doesn’t look out of place in the Indiana Jones fedora.

Everyone else is versatile in multiple roles, with the standouts being Eric M. Messner and Audrey Bertaux, who play the engaged couple but also a number of roles, from scared toddlers to Polish seamstresses to bat mitzvah candidates. Rena Cherry Brown is in the act as well, as a friend of Roberta’s, but also an elderly Holocaust survivor and a rambunctious kid.

Robbie Haye’s set is briskly utilitarian, with a sharp use of screens behind for G. Ryan Smith’s projections, depicting setting, maps or, in one amusing sequence, a drive from Baltimore back to D.C. It’s framed with an arch of nicknacks, flowers, pictures and NPR tote bags each pinpointed with light as necessary in Brian S. Allard’s light design.

In addition to the tote bag, cast member Michael Kramer gets one of the bigger laughs by stating “I’m Robert Seigel” in a way any “All Things Considered” fans may know.

The NPR references, which may be a shout out to Renee Wexler, who helped break the original story, only proves how well Calarco knows her audience.