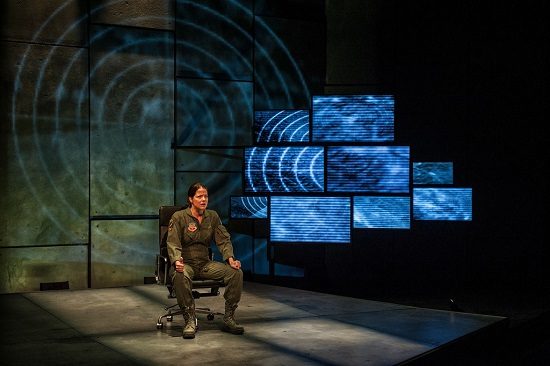 Megan Anderson as The Pilot in Grounded. Photo: Clinton B Photography.

Even if one entered Olney Theatre Center’s Mulitz-Gudelsky Theatre Lab without knowing anything about George Brant’s taut play Grounded, the visuals already established will tip you off that you will be in for a tense, bumpy ride.  Seated on a black swivel chair, motionless, is a slender woman in an olive drab flight suit (designed by Ivania Stack) before a group of imageless TV monitors except for gray wavy lines across the screens.  The audience is eventually in place, the lights black out for a second, and then pow!

The Pilot, the sole identity of the woman in the flight suit, springs to her feet from her chair and tells Brant’s poignant story of how we arrived at this point.  Megan Anderson, who recently turned in a terrific performance in Rep Stage’s The Whale and is a resident actor at Everyman, delivers the punches like a brawny fighter making use of rapidly spoken, high-octane soliloquies, often employing combat stances and macho swagger, and energetically moving about the stage with a purpose in a tour de force that is as riveting as it is outstanding.

Fresh off an impressive, highly acclaimed run at Baltimore’s Everyman Theatre in the fall, Ms. Anderson, along with Director Derek Goldman and the production staff brought the one act, solo play to Olney.  Both theatre companies co-produced Grounded in their respective venues.

The opening placement of The Pilot in front of the screens is a windowless trailer in the desert outside Las Vegas.  From this locale, she remotely operates drones for combat sorties over Afghanistan’s desert some 8,000 miles away.

To her chagrin, this is her lot right now.  The once ace pilot had previously enjoyed being an actual combat fighter experiencing “the blue” in her F-16 that envelops all sides of the cockpit where she could drop missiles on enemy positions; hear the boom, but leaving the unknown carnage behind her as her plane moves on.  She would cavort and drink with her comrades-in-arms after missions, listen to AC/DC, and delight in sexual conquests now and then.  It was exhilarating.

…an explosive performance from a highly skilled actor will mesmerize you

But on leave in the States three years ago, The Pilot met a man named Eric who was excited by her flight suit, which made her also excited and ultimately this led to her being pregnant and getting married.  Air Force rules are such that once pregnant, you are “grounded.”

Unhappily, this led to her current assignment doing the killing deeds from afar.  She spots a convoy, a person, a group of people in the desert on a blurry gray monitor that cannot actually discern what or who the target actually is.  The audience, too, is confounded by the inexact images on the bare stage’s multiple screens as she makes these identifications in what seems to be guesswork.

The Pilot is greatly pressured from on top to snuff out a high profile target.  During these 12-hour shifts, she adjudicates the guilt or innocence of the potential targets and the drone makes the strike.  When as an actual bomber pilot, she would fly away from a scene following a strike, she possesses the capability to now linger over the area through the drone and see what destruction she had wrought.  She so much prefers to be in the cockpit rather than being a part of the “chair force.”

Through this odd commuting to war from her home, the pilot gets to spend some time with Eric and her young Samantha.   She argues at times with her husband with his uneven schedule as a casino dealer, where he, too, is spied upon by hidden cameras.  She displays joy when seeing her Sam but is concerned about how she will grow up.  Frustration builds as The Pilot experiences the humanity not always felt in combat.

These characters are not onstage but because of Ms. Anderson’s storytelling prowess, we begin to know them.  Through her expressive gestures and monologues, we hear her commander, the “19 year-old” who shares the drone shift, as well as her family. Although most military drones are used for surveillance and intelligence gathering rather than direct attacks, Brant’s Grounded does not make a case for or against the use of drones.

The play does, however, push the audience to think of the impact the tensions and frustrations of military duty can have on family life, especially if dissatisfied with one’s own function in the military. Megan Anderson adroitly displays a full range of emotions from cocky self-assurance to clenched-fist frustration to teary-eyed despair with the delivery of her monologues, body language and facial expressions.

Derek Goldman’s direction synthesized this play to perfection, forcefully bringing to the stage Brant’s powerful script. The lighting design by Harold F. Burgess III, the eerie projections by Jared Mezzocchi and the sound design/composition by Eric Shimelonis amplified the work of one sterling actor, Megan Anderson.

Grounded is a gripping play, to be sure, but an explosive performance from a highly skilled actor will mesmerize you for certain and should not be missed.

Running Time: One hour and 10 minutes.

Advisory: The play contains profanity and is not recommended for children under 14.