Theatre Review: ‘How the Other Half Loves’ by The British Players at Kensington Town Hall 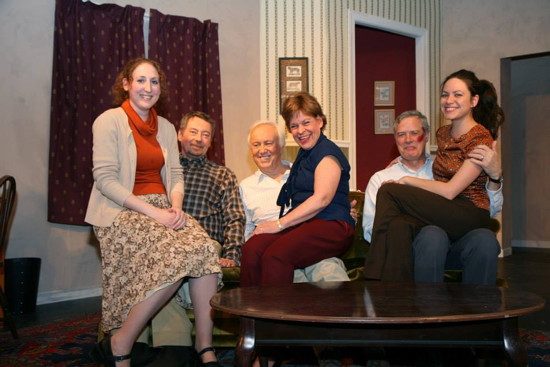 My goodness, you’d certainly have to be a comatose curmudgeon not to be charmed by this latest British Players creation.  This zesty, quite zany company excels at merry theatrics, the latest sterling example is this exquisite farce How the Other Half Loves written by the formidable British playwright Alan Ayckbourn.

In short, it’s a sex farce tastefully rendered which casts an amused eye at human foible.

It’s also a challenging script with the action taking place in two different homes presented simultaneously often with all half-dozen actors present and cavorting in their separate yet combining stories in one grand set.  Most overly practical-minded directors would find this far too daunting but all goes well with British Players’ director Pauline Griller-Mitchell backed by producer Eileen Kent.  What would otherwise be a mournfully chaotic spectacle with actors colliding and dialogue a confused babble comes off instead with clarity and aplomb in Griller-Mitchell’s hands.

…a thoroughly delightful show, another glowing gem from The British Players.

Set in the suburbs of mid 1970s Britain, Susan Paisner portrays the almost stoic Fiona Foster who is driven to desperation and infidelity by her unrelentingly tedious husband Frank Foster, played  with convincing silly seriousness by Peter Harrold.  Poor Frank prattles endlessly about fixing his electric toothbrush, among other miserably minor matters, while Fiona longs to throw herself once again into the arms of the resolute, dissolute Bob Phillips, a satyr depicted with high-spirited brashness by John Allnut.

Karen Romero plays the satyr’s suspicious wife Teresa Phillips.  Onto his tricks, this shrew grills her lout with laser-like glaring eyes and sabotages the household.  Into these combined cockpits wander the innocent soon-to-be-embroiled souls William and Mary Detweiler.  Earnestly bland yet resplendent in polyester leisure attire, William is portrayed by John O’Leary.  His outfits alone draw audience laughter, thanks to the cleverness of costume designer Linda Swann.  He will later morph into an explosive outraged husband, though his dear wife is innocent.

This wife is portrayed with riotous effect by Laurie Simonds who shows great mastery of outright farce with her comic facial expressions, nicely restrained, ever-changing and marvelously silly.   The otherwise realistic characterizations of the other actors showcase this wonderful clowning.

By play’s end the philanderers are somewhat back into the good graces of their outraged partners and we sense that all is again well in suburbia, at least until the next eruption of sexual indiscretion.

Running Time: Two and a half hours with a fifteen minute intermission.

Advisory: Infidelity but not graphically sexual.