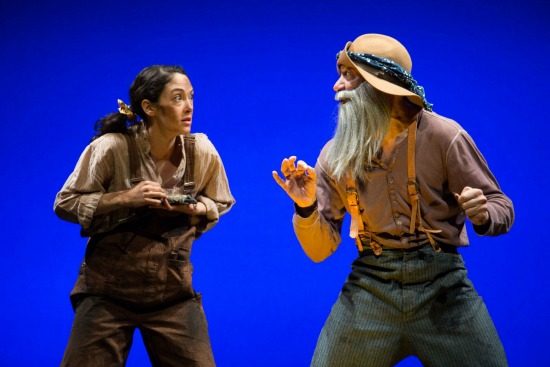 The title of Beth Henley’s new play sounds like an order; at least a nudge.

Laugh is her effort to move away from her more serious works from the stage that have included the Pulitzer Prize winning Crimes of the Heart and 2013’s The Jacksonian. Her setting is the silent movie heyday of the early 20th century.

It’s a rich area to mine, considering the innovations on the screen and the speed at which people became international stars. But in the current world premiere at Studio Theatre, it’s not always a smooth road to laughter.

Using slapstick at the outset (in a fussy bit involving stagehands), and then exaggerated action as if from a Warner Brothers cartoon, she also throws in exuberant alliterative wordplay, pure absurdity and straight up jokes before throwing in actual cream pies. It almost feels like she’s trying anything that works after a while, and in comedy such perceived desperation can dry up the mirth.

‘Laugh’ is good for one or two, even if it strings things a bit too long.

Like a lot of old comedies, the story is simple. A waif named Mabel inherits gold after a mining mishap, a distant aunt is anxious to get her hands on the riches; a dim, butterfly collecting son is ordered to to marry her.

Things go wrong. Despite the ill intentions there is some connection between the young couple played by Helen Cespedes and Creed Garnick — the only actors in the cast of six who aren’t playing a handful of roles. They see a lot of movies, learn about the world through them.

An incident occurs at a Valentine Pornography studio and they part ways; money is involved (about $15). And that would be a good enough end of things.

But a whole second act looms, with the thwarted twit in the depths of Nowhereville eating mud and, just as unlikely, the waif becoming the biggest star in Hollywood (and adopting a Romanian accent for some reason). He goes off to Hollywood to find her and eventually reaches her. But by then the exaggerated work of the actors that have done so much to wring out any humor has largely lost its novelty.

There’s a reason most silent comedies were two-reelers. They told their jokey stories in 20 minutes or so and went home, unless there was some rare comic genius at the helm, from Charlie Chaplin to Buster Keaton.

Despite all the effort, Laugh doesn’t quite have that. It has Mabel, bringing to mind the early film actress Mabel Normand, whom Cespedes somewhat resembles. The versatile actress is more in the mold of the Holly Hunter type for whom Henley writes so many of her plays. Yet she’s neither quite lowdown enough to represent the dustiness of the waif, nor haughty enough to suit Hollywood royalty (though she comes closer to the latter).

Garnick  does a very good job as the dopey, lovestruck suitor. The role wouldn’t work at all for someone less talented.

The real zing for Laugh comes in the supporting roles, particularly the rubbery face of Evan Zes who goes all out in each of his roles, bringing an exaggerated Jimmy Findlayson punch to everything he does, from the exploded miner Curly P. Curtis to a trio of potential Valentine models.  Felicia Curry is a marvel as well, in all manner of strange, snaggletoothed roles.

Jacob Ming-Trent commands our attention every time he’s on, from the first time he’s first introduced as Uncle Oscar Defoliant, a man so lazy he’s literally glued into his seat. Emily Townley, familiar to Studio audiences from a number of past roles, is strong as the greedy matriarch looking for the golden connection, but she returns a couple of other times as needed, so deep in supporting roles she’s not always immediately recognized.

The secret ingredient throughout is Wayne Barker at the piano, who also sets the stage as narrator. Just as much of the success of silent films relied on the skills of the musical backing that night, Barker’s witty, melodic score throughout gives the work a lift.

Laugh is good for one or two, even if it strings things a bit too long. The good work of the actors under the bold direction of David Schweitzer largely keeps the plates spinning. But one can’t imagine a life for Laugh without them.