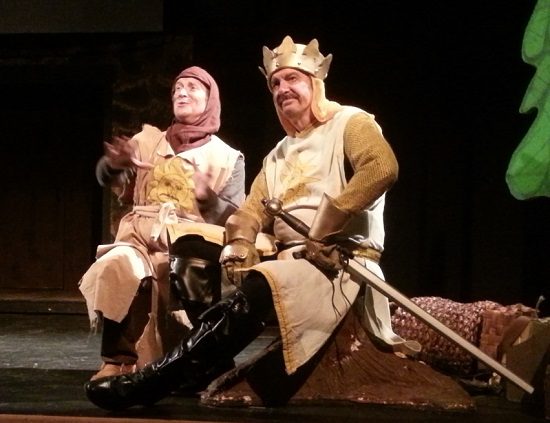 The labeled ingredients in the canned mystery meat known as Spam are chopped pork shoulder meat, with ham meat added, salt, water, modified potato starch as a binder, sugar, and sodium nitrite as a preservative.  More than just canned humor, the ingredients of Silhouette Stage’s production of Monty Python’s Spamalot include a hard-working cast, live music, hilarious songs, and a script featuring the witty and sometimes politically incorrect British humor of Monty Python!

Winner of the 2005 Tony Award for Best Musical, Monty Python’s Spamalot is “lovingly ripped off from the motion picture Monty Python and the Holy Grail.” The title of the show comes from the line: “We eat ham, and jam and Spam a lot.” Eric Idle, a writer and actor in the legendary “Monty Python” TV series and movies, also wrote the book, lyrics, and music to Spamalot.  John Du Prez who had a long association with Eric Idle shares in the music credit.

Overall, Silhouette Stages’s production of ‘Monty Python’s Spamalot’ has all the right ingredients of a fun show!

Much like Monty Python’s TV sketch show, Spamalot is less about plot and more about making light of dark situations.  But if you really want to know the basic story, and “if you accept that it hardly matters,” it concerns King Arthur’s (Mo Dutterer) attempts to gather up his “Knights of the Roundtable” while searching for the Holy Grail.  Aided by Patsy (Jeremy Goldman), his loyal clip-clop sound technician and burden-carrier, they encounter diverse challenges through the countryside.

Co-directors Conni Ross and Debbie Mobley not only assembled a hard-working cast, they also had the insight and skill to utilize each cast member to the best of his or her ability.

You’ll die laughing, watching as Matt Wetzel plays a myriad of roles, including the Historian, Not Dead Fred, French Guard, Minstrel, and Prince Herbert.  He plays up to the hilt his shorter stature, knowing no boundaries since the end result is a belly-full of hearty laughs from the audience.   Choreographer Tina DeSimone has Matt doing all sorts of funny dance moves during the song “I Am Not Dead Yet,” such as the Charleston, a cartwheel, and a split.  Later, Matt in his blue gown and brown wig transforms into a boyishly feminine Prince Herbert.  Will he find his true love?

Jeremy Goldman as the lovable Patsy proclaims to King Arthur, “Some things in life are bad. They can really make you mad. Other things just make you swear and curse. When you’re chewing on life’s gristle. Don’t grumble, give a whistle. And this’ll help things turn out for the best…And always look on the bright side of life.” With the ensemble wearing raincoats and holding umbrellas, it is raining smiles during one of the most singable songs in the show, “Always Look on the Bright Side of Life.”

Mo Dutterer as the handsome and strong King Arthur laments to Patsy saying, “Let me get this straight, I’m a King without a single knight to command.  There’s nobody. I’m absolutely alone.”  What makes this funny, of course is that he isn’t alone.  He has his loyal friend Patsy who is always by his side.  Singing “I’m All Alone,” Mo Dutterer’s voice is blissfully masculine while Jeremy Goldman’s eye expressions speak volumes when words and music aren’t enough to tell the story.

This production would not have been possible without Michael Tan’s terrific musical direction and keyboard playing.  Other orchestra members include Greg Bell on bass guitar, William Georg on keyboard 2 and percussion, and Jeff Glass on drums.

Overall, Silhouette Stages’s production of Monty Python’s Spamalot has all the right ingredients of a fun show!

Disclosure:  Mo Dutterer was my high school drama teacher.  It in no way influenced the outcome of this review.

Running Time: 2 hours and 10 minutes with one intermission.

Advisory: Some profanity and mature situations.