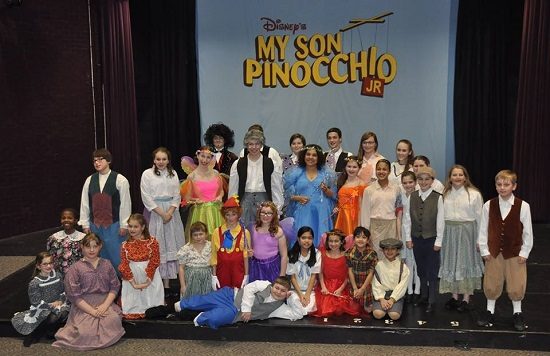 The cast of ‘My Son Pinocchio, Jr.’ at Children’s Playhouse of MD. Photo provided by CPM.

Have you ever wished for something that didn’t actually turn out the way you hoped? I’m sure we all have! In the musical tale of Disney’s My Son Pinocchio, Jr. presented by Children’s Playhouse of Maryland, Inc. and directed by Liz Boyer Hunnicutt, we hear the untold story of Gepetto, an unsatisfied recipient of a wish to grant him a son (Pinocchio) by The Blue Fairy. The story follows Gepetto and Pinnochio from the time he firsts asks for the wish and all of his encounters as a new father. Given the great deal of mischief and grief that his new son Pinnochio has caused, Gepetto decides that he no longer wants him and tries to give him back to The Blue Fairy who claims that she has a “100 % satisfaction guarantee” on all wishes granted.

‘My Son Pinocchio, Jr.’  is a wonderful play to see for kids, by kids, and especially for the kid at heart.

Olivia Lockett was fantastic as Pinnochio, and is an impressive actress and musical talent. She is a natural on the stage-never once breaking from her “puppet-like” character, which made her all the more believable. Lockett’s lovely voice was a perfect pitch for the classic “I’ve Got No Strings.”

William Hornby did an incredible job playing Gepetto, and was outstanding in his performances of “Empty Heart” and “Gepetto and Son.” Hornby has a great voice and even better stage presence. Stromboli’s character was an absolute hoot, and played amusingly well by Theo Halligan. “Bravo Stromboli” performed by Halligan and Marionettes (Brooke Marriott, Sarah Ward, Taylor Meadow-Powell, Molly Ross) was an absolute favorite-boasting with lots of funny lyrics.

Anderson Gray (The Blue Fairy) was comical, witty, and indeed a fairy at heart. Gray has a beautiful voice that commands the stage, and is definitely a star in the making. Ava Correlli, Emma Hester, Kate Lutz and Maia Vong played the charming and delightful Fairies in Training (Arancia, Viola, Sue, Rosa) and did an excellent job in their rendition of “When You Wish Upon A Star” along with Anderson Gray (Blue Fairy). Matthew Byrd (Professor Buonragazzo) and Ringleader played by Kevin Franiak were both strong singers and great supporting actors.

The Ensemble were energetic and cheerful, with each cast member bringing superior singing and acting chops to the stage, most notably in their performance of “Toys.” Kudos to Diane Smith’s (Set design, Artistic director) visionary genius for My Son Pinocchio, Jr.; she did a wonderful job transforming a small space into the world of Gepetto and Pinnochio. Musical Director Julie Parrish did an amazing job with guiding the angelic voices of the children in the company-the singing for the musical numbers were flawless. Sharon Byrd (costume coordinator) and her team brought the entire company of characters to life with simple, yet fun costumes that were fitting for their respective personalities. The choreography (Amanda Dickson) was lively and not a step was missed, which was just icing on the cake for this very entertaining show.

My Son Pinocchio, Jr. is a wonderful play to see for kids, by kids, and especially for the kid at heart.