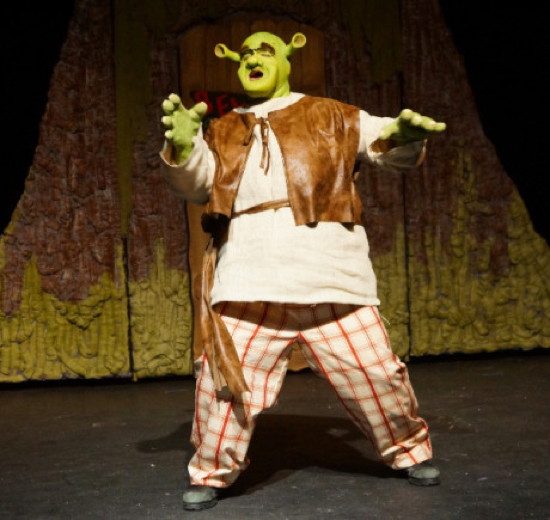 From greetings by whimsical fairytale creature ushers, to face-painting fun during intermission, Charm City Players does a great job. In their most recent production of Shrek The Musical directed by Stephen Napp, no detail was left unnoticed-from the scene design (also Napp) to costumes. This show brings magic, entertainment and wit to another level!

The musical is based on the DreamWorks movie and book by William Steig that follows Shrek on his journey to rescue Princess Fiona from a dragon-guarded tower in order to win back his swamp from Lord Farquaad, the king of Duloc. A pitch-black theatre with a green-lit stage sets the scene for Young Shrek’s (Pierce Elliott) childhood ogre swamp. From there, we are introduced to Shrek’s parents and learn just why he is an “ogre with many layers.”   Shrek The Musical has a few funny additions that add insight into the history and lives of our favorite Shrek characters, which is an extra little goody for die-hard fans.

Charm City Players’ Shrek The Musical leaves you wanting to sing your sorrows away and dance your pants off!

Charm City Players’ Dean Davis IS Shrek! A more-than-impressive performance, Davis’ strong and authentic-like Scottish accent was reminiscent of the original Shrek played by Mike Myers. Davis flawlessly incorporated the accent into his most memorable musical numbers “When Words Fail” and “Build a Wall,” never missing a note or coming out of character. It is one thing for an actor to play a role, but Dean Davis actually becomes Shrek when he hits the stage of the Hannah More Arts Center. Bravo, Mr. Davis!

Malarie Novotny was a pleasure as Princess Fiona. Novotny did a stand-up job playing both the sweet and strong sides of her character. She has an extremely beautiful voice that she manages well on stage. A great stage-presence, Novotny is an actress that has a promising leading-lady career in theatre. Huge acknowledgements to Susanna Hoffman (Young Fiona) and Dani Kellner (Teen Fiona) for impeccable singing in “I Know It’s Today” and for their excellent portrayals of Princess Fiona.

Hargrove was ever-so-delightful as everyone’s cherished and irritating bestie, Donkey. His performance gave so much life to the stage! Hargrove’s perfect comedic timing makes the show, and his singing chops were a treat to hear in “Don’t Let Me Go.” This talented actor is definitely Broadway potential and I am sure we will see more of him in performances around Baltimore and beyond.

A superior singer with the acting skills to match, Melissa Ann Martin was absolutely dynamic in her role as Dragon. She moved well, sang her heart out, and “wowed” as she worked the stage. Martin also played Mama Ogre and Mama Bear, and to no surprise, she was just as amazing in these roles-giving her all in every verse sung and in every line spoken.

Steve Wannall as Lord Farquaad was hilarious! Wannall was right on time with his rendition of this role, using “every inch” of his comedic skills to bring a “little” laughter to the stage. Ryan Roberts was the wonderfully wooden Pinnochio, and played his role to a tee. The entire cast’s performance in this piece was big and bodacious, and it is no doubt that each member put a great deal of work into making this show amazing.

Costumers (Mary Gorman, Mary Hoover, Tina Karavedas, Lynn Keller, Kathryn Weaver) character creations were phenomenal! The creativity the team used to transition Princess Fiona into an Ogre through the use of special green lighting effects (with the help of the lighting team), ogre ears and silk green gloves. It was even more of a pleasant surprise to see her last and final transition into ogre-hood during her marriage ceremony-complete with green “skin” and all! Kudos to the entire production staff for seamlessly bringing together this magnificent musical!

Filled with lots of gas and giggles, this family friendly smash hit is sure to have you and your little ones in stitches-just remember to bring your nose plugs!

Shrek The Musical runs weekends through May 3, 2015 at Charm City Players’ residence at the Hannah More Arts Center located on the campus of St. Timothy’s School, 8400 Greenspring Avenue Stevenson, MD 21153. For tickets purchase online or call 410-472-4737.