Theatre Review: ‘The Flying Dutchman’ at the Kennedy Center 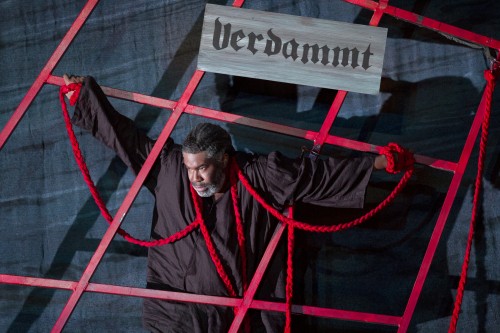 Eric Owens as The Dutchman. Photo by Scott Suchman for WNO.

Richard Wagner’s The Flying Dutchman, directed by Stephen Lawless and now playing at the Kennedy Center, begins with a long overture set against a backdrop of rolling ocean waves, framed by a rough quadrangle of wooden plans. The music itself somehow captures the sheer power of the ocean, its enormity, its delicacy, and its indestructible force. It is into this merciless world that the eponymous Dutchman (Eric Owens) emerges, clinging to the ropes of his ship, bearing a sign that says “Verdammt” (German for “damned”).

‘The Flying Dutchman’ is a spectacular work, and an incredibly affecting production…

Based on an old folktale, The Flying Dutchman tells the story of a man forced to roam the seas in search of an eternally faithful bride, able to come ashore only once every seven years. He meets a sea captain (Ain Anger) who, in exchange for some of the riches the Dutchman has accumulated over the years, offers the hand of his daughter Senta (Christiane Libor). Senta, meanwhile, has already fallen in love with the Dutchman’s portrait and his tragic story, to the consternation of her suitor Erik (Jay Hunter Morris). She pledges to be the faithful bride to break the curse, but the Dutchman accuses her of infidelity after overhearing her argue with Erik, and breaks their betrothal. To prove her devotion, Senta throws herself into the sea.

This is not a placid, romantic opera, but a driving, gripping work of drama about a man’s hope of redemption through love. The bulk of the pathos in opera emanates from the music, and Wagner’s score, though brilliant, would be nothing without the sheer force of the voices in this production. In particular, Libor’s sweet, delicate soprano serves as a counterpoint to the strong bass-baritone of Eric Owens, highlighting the difference between the sweet, young girl and the condemned sea captain. While portions of the production can drag, the singers remain completely encapsulated in their scenes, so that both the Dutchman’s sense of betrayal and Senta’s untimely demise are palpably felt, even in the Kennedy Center’s cavernous Opera House.

The set design (Giles Cadle) and costumes (Ingeborg Bernerth) are also very effective, particularly the parade of the Dutchman’s unfaithful, damned companions, women in ghostly apparel from various time periods. Backed in hellish red light and framed by roiling smoke, their appearance is deeply frightening. Likewise, the series of blue-tinted wooden frames that mark the stage lend a haphazard, almost chaotic feel to the production, as if the audience were also tossed amidst the rolling waves of an ungracious sea.

Opera is not always everyone’s cup of tea, and a lengthy production such as this one (over two hours with no intermission) may be too much for some people. But it is a spectacular work, and an incredibly affecting production. I look forward to more Wagner from the Washington National Opera, particularly next season’s Ring cycles.

Note: this production is in German, with an English translation projected above the stage.