Theatre Review: ‘The Importance of Being Earnest’ at Chesapeake Shakespeare Company 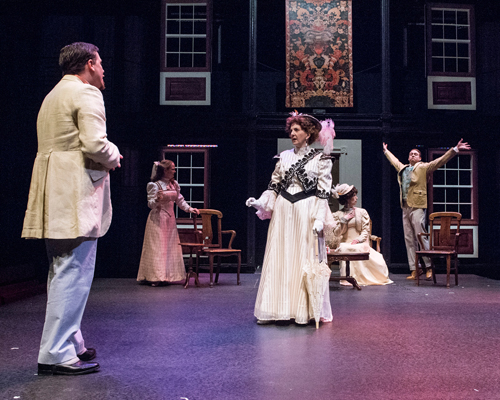 The Importance of Being Ernest was first performed on Valentine’s Day 120 years ago and has remained Oscar Wilde’s most beloved play. With the subtitle “A Trivial Comedy for Serious People,” this brilliant comedy of manners is a perfect fit for the Chesapeake Shakespeare Company (CSC) as it continues to expand its repertoire outside the works of Shakespeare. To use an appropriate line from the Bard, “what’s in a name?” To the two young ladies in Wilde’s play, it is everything. Only the name “Ernest” will do for a prospective husband and it is at the heart of this hilarious, romantic farce.

Using a spare set by Daniel O’Brien, the focus is on the characters dressed in lovely costumes of the period designed by Kristina Lambdin. The brilliant, witty dialogue of Wilde needs no elaborate set dressing as he pokes fun at the conventions of London’s Victorian-era upper crust.

…CSC’s production of The Importance of Being Ernest is just the ticket to an evening full of laughter and great fun.

The story revolves around two young bachelors, Algernon Moncrieff (Joe Brack) and Jack Worthing (Travis Hudson) and their pursuit of love under false pretenses, though there is no doubt that their feelings are – pun intended – in earnest. They have created alter egos to escape the social demands that do not suit them – one identity for the country and one for the city. Jack has created a black sheep of a “brother,” Ernest, but he uses the moniker to woo Gwendolyn Faifax (Kathryn Elizabeth Kelly) while visiting the city. Gwendolyn is the cousin of his friend, Algernon, a rakish fellow full of mischief. He has his own scapegoat – his friend “Bunbury,” who lives in the country and is always on the verge of death.

To Jack’s young ward, Cecily Cardew (a picture perfect Lizzi Albert), Ernest has become an unmet object of love, for no one with that name could possibly be all that bad. She has even recorded an imaginary proposal from him in her journal. Jack’s description of Cecily intrigues Algernon and he secretly decides to visit Cecily posing as Jack’s “brother.” He is immediately smitten. When all descend on Jack’s country home, the farce shifts into high gear with a surprise twist and happy ending that would make Dickens proud.

Lady Bracknell is one of the great satirical characters in theater and Leslie Malin plays her with marvelous relish. As both Gwendolyn’s mother and Algernon’s aunt, she personifies Wilde’s view of the ills of British high society. She is the greatest impediment to the union of the two sets of lovers as they must stack up against her snobbish view of suitability and morality.

The supporting characters give equally charming performances. Lisa Hodsoll as Miss Prism, Cicely’s old maid governess, is enchanting in her a shy affection for Reverend Chasuble, played so sweetly by Gregory Burgess. Lyle Blake Smythers gives sly, dual turn as Algernon’s manservant and Jack’s butler. He is great fun to watch as he is quietly bemused at the foibles of his masters while magically fulfilling their every request before they ask. It also should be noted that all of the actors have mastered their British accents quite well.

The director Erin Bone Steele has her actors utilize the minimal set to the maximum effect though at times Algernon’s bounding and skipping seems a bit over the top – and a bit affected. Otherwise, Brack’s high-energy performance and comic timing work well off of the sincere Hudson. This young actor continues to grow with each production and gives a wonderful performance as Jack.

If you are looking to ward off the winter blues, CSC’s production of The Importance of Being Ernest is just the ticket to an evening full of laughter and great fun.

The Importance of Being Ernest runs though March 22, 2015 at Chesapeake Shakespeare Company, 7 South Calvert Street, Baltimore, MD. For tickets call (410) 244-8570 or purchase online.