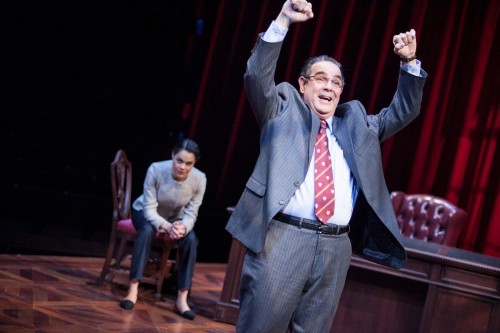 (L to R) Kerry Warren as Cat and Edward Gero as Supreme Court Justice Antonin Scalia in The Originalist at Arena Stage at the Mead Center for American Theater March 6-April 26, 2015. Photo by C. Stanley Photography

It isn’t every day that the political theatre of DC moves out from our revered halls and back rooms and into the world of actual theatre, but once in a while, something happens. Right now, that something is The Originalist, playing at  Arena Stage, and the flaming show should definitely ignite your interest no matter what side of the aisle you sit on. Written by award-winning playwright John Strand and directed by Molly Smith, this world-premier drama not only dares to take on politics in DC, but–cue dramatic sound effects–it actually revolves around the highly divisive and very much current Supreme Court Justice, Antonin Scalia.

‘The Originalist’ is brilliant, witty, smack full of humour and jokes, relevant to the time and brimful of ideas and questions.

Justice Scalia, sitting on the Supreme Court, attempts to interpret the Constitution according to what he thinks the original, breeches-clad founding fathers intended at the time. “It’s dead,” he argues, going on to explain that it is a monument to the greatest of thought. His point of view is that of an Originalist–how it was originally intended. Four-time Helen Hayes winner Edward Gero takes on the role of Scalia in this “historical fiction” of a play. The real Scalia’s views are as aptly explored as his actual gait is personified by Gero. Lest the production keel over from being one-sided, though, enter the brilliant and magnetic Kerry Warren as Cat. A hardcore liberal, she becomes a clerk for Scalia in order to learn about “monsters.” The two duke out their differing views in rounds of verbal barrage across the changing set, moving from his chambers to a shooting range, a hospital, and more. She contends that the Constitution is a living document and should be interpreted as such.

As the professional relationship between the pair develops, the question of which of the two will influence the other grows. Despite their starkly contrasting views, Scalia and Cat have a lot in common and develop a grudging respect and affection for one another. Of course, since it is difficult to have a play without a real villain, another law clerk is introduced, the wet bottomed, arrogant Brad, whose remarks were certainly enough to raise this audience member’s hackles. Harlan Work, playing the slick law clerk, gives Cat yet another sparring partner and creating another mirror in which to look for monsters and humanity.

Going into the show, I had no idea what to expect. Would this be a show that exalts Scalia or slaughters him? Would it be polarizing and too political? Would there be a good balance between the very real person of Scalia and the made up bits of the production? Would I cringe or laugh?

As much as The Originalist is a very intense and deeply serious drama, it definitely struck my funny bone on a number of occasions, and never seemed to take itself overly serious. It is definitely a piece of drama and not a biopic, and I was engrossed by both the story and staging. As the characters reveal ever more self to one another, layers and pretenses and personas stripped away, we move from monsters to humanity and between heart and soul. There was a singular moment in the play when I knew I was completely captivated; when I swiped at my face and found I was crying. Judging by the muffled sniffles throughout the audience at that same time, I definitely was not alone.

The show even-handedly explores the person of Scalia and leads us carefully but decisively–and definitely with full on jargon–into the legal world of the Supreme Court. In the end, the drama is perhaps not even about law or Scalia at all, but about what it is to be human and to be true to yourself (not “lose your soul” as Strand writes it) and appropriately navigate situations that are at odds with you.

The Originalist is brilliant, witty, smack full of humour and jokes, relevant to the time and brimful of ideas and questions. It is definitely a show you don’t want to miss, whether you just like a great piece of drama, want to check out some DC politics in the theatre, or want to go see some excellent acting.