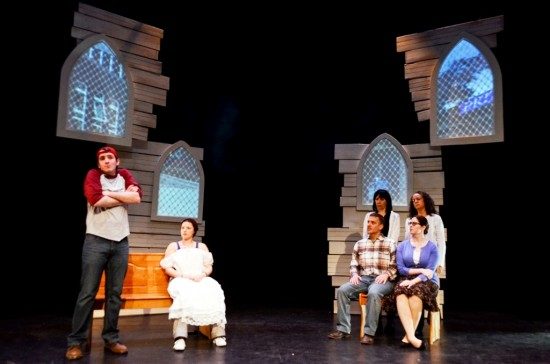 In its recent works, Iron Crow Theatre, Baltimore’s queer theatre company, has delved into the subject of death from different angles.  From the Jeffrey Dahmer murders in Joseph W. Ritsch’s Apartment 213 to suicide in Sarah Kane’s 4.48 Psychosis, death and its impact on others have been explored with a degree of creative artistry that is open to interpretation.  With the world premiere of The Revelation of Bobby Pritchard written by Baltimore playwright Rich Espey currently playing at The Theatre Project, audiences are given another view of death, and in this case two deaths.

The intense one-act play that brings to the forefront the struggle for LGBT acceptance in a Southern town called Boiling Springs with its religious dominance forms the backdrop of a splendid performance by the six-person cast under the deft guiding hand of director Steven J. Satta.

Espey’s play relies heavily on flashbacks to 40 years ago that alternate with the present and the use of symbolism, which is laced throughout. Most cast members are called upon to play dual roles reflecting the different time periods, and they do so expertly.  To underscore the connections the characters have with religion, the majority perform Church hymns during several points in the play and do so melodiously demonstrating their vocal skills.

Mollie Singer’s simple but imaginative set consisting of several church windows surrounded by light-colored wall sections and two pews amplify the religious themes inherent in the plot.  The continuous projections by Travis Levasseur on the windows and the rear wall of the stage depicting clouds, a flowing river, a bullet traveling in slow motion, and even snowfall add to the visual experience.  Chris Flint, the lighting designer, does a wonderful job in dimming and brightening the lights to correspond with the past and the present scenes and to illuminate the dramatic exchanges.

The story centers on Martha whose name eventually became Marta played strongly by Julie Herber who has recurring dreams about Bobby Pritchard—a gay man for whom the cause of his demise 40 years ago was never fully resolved.  Through her dreams about Bobby and what her recollections were of his death, Marta is compelled to visit rural Boiling Springs to reveal the truth.

She brings her wife Cyn (played wonderfully by Susan Porter) to exchange their vows in the church in which she had grown up. On their visit, she encounters her brother Hank (Dave LaSalle) who is grappling with his own son’s sexual orientation.  Pos, a name the son changed from Oren, is a high school baseball star and is played very well by Sean Kelly.

Mr. LaSalle also plays Clem, Hank’s father during the flashbacks, and his intensely powerful performance for both characters added mightily to the play.  In perhaps the most dramatic scene, Clem demands Bobby (Sean Kelly) to repent for his sins, but the young man refuses, leading Bobby Pritchard to his mysterious and premature death.

Heather Peacock turns in a solid performance as Mary Charles who is Kathy’s daughter and as young Martha who was willing to set up a faux relationship with Bobby to cover up their sexual orientation. Rounding out the cast is Sarah Lynn Taylor who ably plays Kathy, a girlfriend of Hank’s in the present, and also Martha’s mother in the past.

Both Mary Charles who is genderqueer and Pos were placed in a reparative therapy facility, which had been named for none other than Bobby Pritchard.

The character development, acting, staging, direction and technical elements are all in sync to deliver a powerful message about LGBT rights and the tension with religion.  The Revelation of Bobby Pritchard is among the best of Iron Crow’s productions in its four-year tenure.

Running Time: Approximately one hour and 25 minutes with no intermission.

Advisory: The play contains profanity and is not suitable for children.