Theatre Review: ‘The Spoof, the Whole Spoof, and Nothing but the Spoof’ by Hexagon 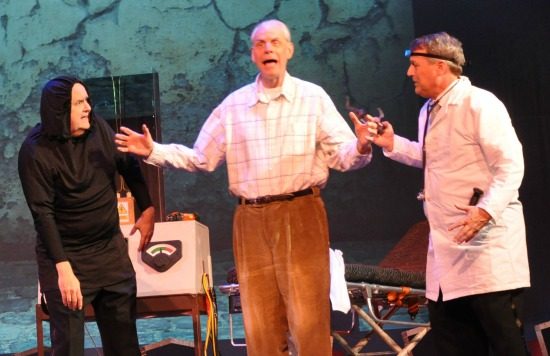 Hexagon just goes on and on and on. The six-sided show is in its 60th year in DC, stepping up to deliver satirical sketches skewering DC political types and celebs, commenting on our daily lives, and just laughing at ourselves. This year’s offering,–a spring event, just before cherry blossoms–has arrived, entitled The Spoof, the Whole Spoof, and Nothing but the Spoof.

Hex is certainly a unique animal on the DC theatre scene. Each show is the product of hundreds of dedicated volunteers that work tirelessly to produce an original show for its yearly production and its targeted charity. Once again they come up with the goods, keeping it cheeky and topical, and to the cheers of their long time supporters, bringing out their famous kick dance numbers.

…a comfortable family gathering where the crazy uncle gets a little off track.

“This town IS a joke!” says Malcolm Edwards, the Artistic Director of this years show. “At least at our show you can laugh about it for a good cause.”  Let the fun begin…

‘To Be a Liberal’ with Keith Bayha and Mike Meier, is an early highlight, with the 2 performing witty rollicking give and take showing how hard it is to be hugging trees, thinking a certain party way, and feeling you are always right. Just like the other side!

The material–brought by a phalanx of amateur writers, reflects our everyday lives—from our preoccupation with our iPhones and the craze of binge viewing on Netflix–to  the preposterous, as in a  bare-chested Russian bully  (Chad Ramsey) tap dancing into our hearts in “Putin on the Ritz.”

One well-known returning feature is the Hexagon Newsbreak segment that is sprinkled throughout the show. In Hexagon tradition, local news celebs sit in to do the news flashes, to a mixture of guffaws and groan-inducing responses.  On the night of my show our guests were Megan O’Rourke and Kristi King, WTOP Radio Feature Reporters.  A just-miss: “The National Auto Insurance Association would like to point out that Bruce Jenner had his first accident only when he became a woman.”

A better topical one-liner: “In the wake of the Hillary Clinton email scandal, Vice President Joe Biden stated that he and his administration were committed to transparency. He subsequently announced that he would release his 2 emails.” Bada-bing.

Another sketch, ‘The Secret Service Makes Me Nervous’ is a great setup for the talent to give offhand one-liners, using the backdrop of the White House and conspicuously inconspicuous Secret Service personnel standing nearby. Reminiscent of the early 70s TV Show Laugh-In segment where the cast give zingers about everything you don’t expect, it was well received.

One segment that exemplified Hexagon’s broad talent and quirkiness was A League of Their Own in which several fans of our beloved ‘Skins stepped up and announced their pride for their team’s name…followed by fans of the made up teams of Jews, the Urbans, and the Chinese, spouting the same loyalty and exploding the whole issue of the Redskins name in many directions.

Producer Willy LaHood, who also was our Congressman Boehner, has crafted a swift moving show with some nice technical elements.  Dealing with a 40 person cast and countless costume changes, I was impressed.

Artistic Director Malcolm Edwards and Music Director Brock Holmes blended the original work well, given the challenges of the venue.  Choreographer Karen Bara is given a nod for her great work with the vaunted Hexagon kickline.

This year’s recipient of the Hexagons hard work is the DC Employment Justice Center, which helps low-income workers with legal advice for employment law problems. Hex is proud to say that their effort to-date has garnered 4 million for the causes that they support.

Hexagon doesn’t ascribe to or try to match the rapier wit and impersonations of the Capital Steps. This is more of a comfortable family gathering where the crazy uncle gets a little off track.

Hexagon is indisputably an inside-the-beltway show. Others in the hinderland may understand it, but the wonks, lawyers, staffers and all the other government suits that are skewered in the show…and their neighbors…will really get it.

Come give a laugh nite out for ol’ DC and charity.