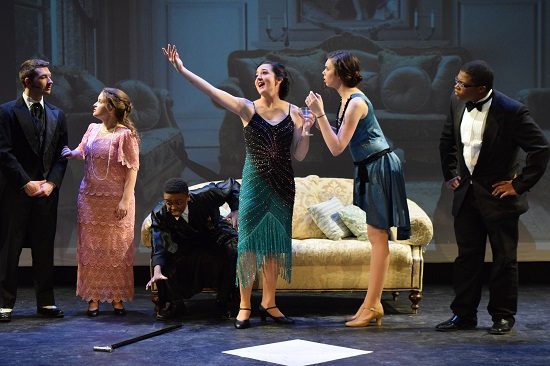 The lights dim and anticipation fills the air. A voice cuts through the darkness. It used to be, sitting in the dark, you knew that when the show began you’d be taken to another world. A world full of color and music and glamor. You thought to yourself, my God, when are they going to bring the lights up? On cue, a spotlight illuminates the contrary speaker and St. Andrew’s Episcopal School’s production of The Drowsy Chaperone begins.

The Drowsy Chaperone is a musical comedy that parodies American musicals of the 1920’s. It premiered on Broadway in May 2006 and was nominated for 13 Tony Awards, winning five. Set as a show within a show, the musical opens on an antisocial theatre fanatic who tries to listen to the recording of a fictional 1920’s show, The Drowsy Chaperone, in order to rid himself of the blues.

The fictional recording itself focuses on the convoluted love story of Robert and Janet, who are engaged. Janet works for Feldzieg’s Follies, but plans to give up her stage career when she marries. This causes gangsters to go after Feldzieg and insist that he stop the wedding in order to keep the show a financial success. As more characters become embroiled in the plot to break up the couple, hilarious mayhem filled with snappy puns, mistaken identities, and spit takes ensues.

Though the ensemble sometimes lacked energy, they came together in the end for a resounding number, down to the very last note, of “I Do, I Do in the Sky.” Another highlight was “Toledo Surprise,” where the cast showcased effective portrayals of stereotypical 1920’s stock characters.

Cameron Mitchell as the omnipotent Man in Chair was the glue that held the show together. To portray the opinionated Broadway snob, Mitchell had to weave in and out of the fictional show, interrupting the fantasy with funny anecdotes and thoughtful ideas that gave the production a sweetness and depth it otherwise would have lacked. His frequent breaking of the fourth wall made the Man in Chair’s desire to escape reality through the absurdity of musical theatre earnest and relatable.

Amelia Heesen shined as the Broadway starlet Janet Van De Graaf, especially in her shoe-tapping anthem “Show Off”. From cartwheels and persistent reporters, to fake French accents and a complicated engagement, Heesen tackled the challenge of being loved and famous with comical grace and aplomb.

Another standout performer was Jordan Reilly, who brought a sarcastic edge to the purposefully drunken, or “Drowsy,” Chaperone, especially seen in her dynamic with her charge and supposed best friend, Janet (“As We Stumble Along”). Her causticness also created an endearing contrast with the fanatic ravings of Mitchell as the Man in Chair.

Though at times the sound had microphone difficulties, the orchestra stayed consistent and complimented the actors onstage. With jaunty brass and string instruments, and one adorable ukulele solo, the orchestra maintained the lively mood of the show.

With a solidly committed cast, upbeat musical numbers, and feel-good satire, St. Andrew’s Episcopal School’s production of The Drowsy Chaperone took you to another world, and gave you a little tune to carry in your head, for when you’re feeling blue, you know?