To counterbalance the echoey chaos of last year, with the Helen Hayes Awards seemed to have been swallowed up by the party it was having at the National Building Museum, the 31st annual event lauding the achievements in D.C. area theatre was moved back to the kind of place with which everyone there was familiar, the stage.

But part of the agreement of leasing the city’s Lincoln Theatre for the night meant showing a brief video of the building’s long running aspirations (which date back roughly to the start of the awards). But it also seemed as though they only had the place for an hour tops. How else to explain the nearly breakneck speed of the event Monday night?

Helen Hayes Awards? It was more like Helen Wheels.

Recipients were cut off into their thanks at 30 seconds with no exceptions. Even when big stars such as stage veteran Tovah Feldshuh came up to receive her award for her work in Golda’s Balcony at Theatre J, the Tony and Emmy nominee was played off.

Before long, more than one actress doffed their fancy shoes, pulled up the floor length dresses and ran to the stage, lest they lose any of their time. Just as often, they ran off of the stage as well, still barefoot. Erin Weaver set the tone for the dashes when ran on and off to receive her two awards — for outstanding supporting actress in Mother Courage and Her Children at Arena Stage and Ordinary Days at Round House. And people ran all night.

Helen Hayes Awards? It was more like Helen Wheels.

“I always wanted to be on ‘The Price is Right.’ Now I know what it feels like,” said Matthew A. Anderson after winning outstanding supporting actor in a Musical for his role in The 25th Annual Putnam County Spelling Bee at Ford’s Theatre.

By the time Steve Hills, president and general manager of The Washington Post, came on stage to award the Post Award for Innovative Leadership in the Theatre Community (to the National New Play Network), he said how happy he was to be “at the 2015 Helen Hayes Awards and track meet.

What’s more, the organizing theatreWashington nearly doubled the number of awards this year by dividing each category into shows with more Equity Actors than others. Confusingly, one was called Helen awards and the other were called Hayes. (Hayes was actually the middle name of the D.C. born namesake of the event; maybe next year there will be a third designation for her original last name, Brown).

Last year’s event had one production number kicking off the event but that was scrapped this year, along with the two intermissions. While a lot of productions honored are long gone, it might have been fun to get a taste at the caliber of talent being honored — even if it were only on videotape. 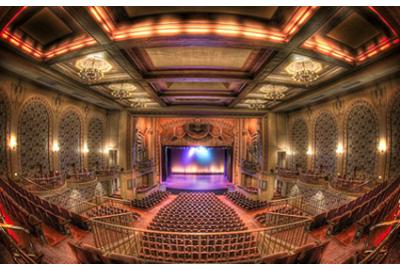 As it was, we only got to see how much energy and exuberance (and, yes, speed) each of the winners had in dashing and delivering at least the start of their acceptance speeches.

With 49 awards to be given away, the one variation in the program turned out to be the In Memoriam segment, which didn’t settle down to the appropriate tone, either. Instead, the giddy crowd clapped at their favorites (leaving the less applauded seem somewhat less diminished) as the live band played a jaunty “Lullaby of Broadway.”

Of course there were casualties in conducting the show so speedily — an outstanding lighting design award winner’s envelope couldn’t quite be found (Christopher Baine of Olney Theatre’s “Colossal” was the winner).

Projected slides that had the night’s only full listings of nominees disappeared when winners were named (and sometimes before). So amid the cheering from those who heard the name, those who didn’t sometimes didn’t know who won or for what (some categories had one person receiving multiple nominations for different shows).

Projecting the name of the winner and the show would have been a help.

It’s possible people just wanted to announce the awards and get to the party, being held down the street at the Howard Theatre, though the partying was in full swing at the Lincoln as well.

It’s also possible somebody was interested in seeing the NCAA men’s final (though not likely). The 8 o’clock awards show, which started late, was actually over before that game’s opening tipoff just after 9.