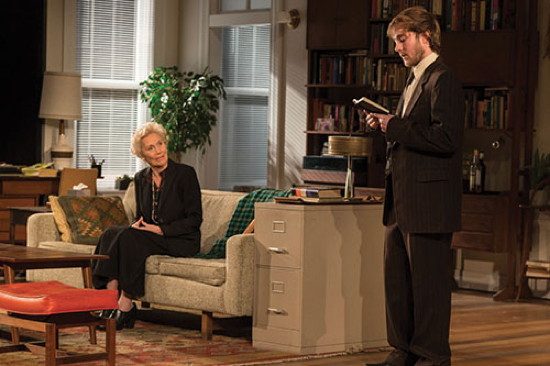 Four thousand miles may seem like nothing in our connected world.  It’s huge, however, when you’re on a bicycle trip for that distance, and it could be a chasm that wide when people from different generations are brought together.  4000 Miles, which is part of the Amy Herzog Festival along with After the Revolution playing at Center Stage’s Head Theater, attempts to close that chasm.

Inspired by her own grandmother who lived to 96, Herzog’s 4000 Miles portrays in realistic terms what happens when an elderly woman Vera, a leftist, who was a character a decade earlier in After the Revolution, receives an unexpected visit from her scruffy, smelly 21 year-old grandson Leo, an ecological-minded neo-hippie, who drops in at 3 a.m. at her Greenwich Village apartment.

It is a tender, genuine play performed by an extremely talented cast…

Coming off a cross-country bike trip that was ruined by a tragic accident, Leo and Vera get together as the story unfolds.  Leo visited her ostensibly because of her elderly status and because he hadn’t seen her since her deceased husband’s funeral.  If he couldn’t stay with her, Leo was prepared to pitch his tent somewhere in Manhattan.  But you know that wasn’t going to happen.

Though related, the duo seem like strangers at first, warily sharing little bits of information about themselves, peeling off the layers of the onion slowly, overcoming a little mistrust and eventually connecting heartwarmingly at play’s end.

In 4000 Miles, you don’t have high drama or major emotional ups and downs.  And while it would have been easy to build in a large cache of comedic moments, there was a limited number in Herzog’s script, and they hit the mark.

Particularly amusing was the time Vera and Leo were on the sofa getting high discussing sex so candidly.  Also, when Leo brought back a girl, Amanda, he met at a bar and they began the early stages of making love, the predictable interruption by Vera received the most laughs.

What you do have is a witty, plausible, and rather restrained work that under the proficient direction of Lila Neugebauer excels as a result of the talented cast.  There are four characters, each with different vulnerabilities that we can all relate to, and you could not help but root for them all.

Playing Vera is veteran actress Lois Markle.  Tall, slender and sprightly, Ms. Markle moves around quite well for someone who is supposed to be over 90.  She does have lapses in memory, and frequently repeats the phrase, “What do you call it?”—perhaps a bit too much.  “Some days I’m myself, and some days my head isn’t right,” Vera acknowledges almost with surprise.

Vera has a neighbor with whom they speak daily only by telephone to make sure that Vera hasn’t expired.  Despite her caring, Vera regards her as “a pain in the a*s.”

Ms. Markle’s timing is perfect during the interactions with Leo, played superbly by Josh Tobin, who is making his Center Stage debut.  Their chemistry is spot on and authentic.  He is athletic looking, and with his strongly projected voice, Mr. Tobin’s Leo presents a powerful figure.

Powerful he’s not but rather quite vulnerable.  He has a complicated relationship with his mother and accordingly, he requests Vera not to mention his presence in the apartment to her.

Leo was having a rocky relationship with his girlfriend Bec, who eventually breaks it off.  She is played very well by Lauren LaRocca.  Vera obsesses over Bec’s perceived weight problem, which Leo rebukes in a comedic moment.  And Leo was especially traumatized after experiencing the shocking episode on the cross-country bike trip.

He reveals late in the play what occurred that the fateful day in a soliloquy with Vera at his side on the sofa—in darkness.  She admits that she didn’t have her hearing aid on and missed most of what happened.  That line was not designed to garner laughs but to demonstrate how Leo’s willingness to share this trauma failed to connect.

Rounding out the cast is Jennifer Tsay as Amanda, Leo’s hook-up, who provided some excellent moments in the short time she was onstage.  Particularly noteworthy was her discovery that Leo’s grandma had been a Communist—a fact that pains her because her family fled China.

As the plot and characters are within the boundaries of realism, so, too is the exceptional set designed by Daniel Zimmerman.   It looked very much like a Greenwich Village apartment with its realistic rooms and furnishings.  Virtually every prop on the set was used at one point in the play.

Eric Southern’s lighting design is also effective as Herzog’s script calls for short scenes that span over a period of weeks necessitating near blackouts for the actors to change into Ásta Hostetter’s contemporary costumes.

4000 Miles is an entertaining show that will not  leave you in tears or aches in your belly from laughing so much nor will the ending floor you.  But it is a tender, genuine play performed by an extremely talented cast and is, what do you call it? Worth seeing.

Advisory: The play contains profanity and is not recommended for children.