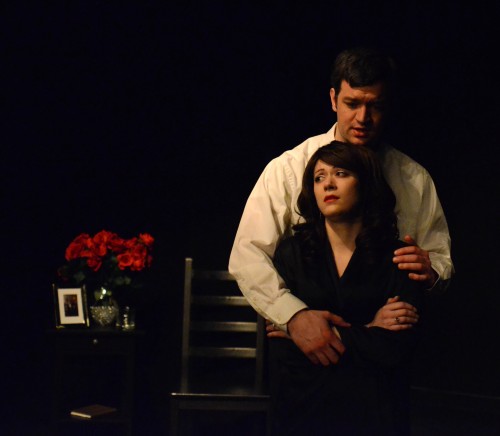 William Krumich as Mosby and Victoria Reinsel as Alice Arden in the production, “Arden of Faversham” by Brave Spirits Theatre. Photo by Kevin Hollenbeck.

Crime in DC just got epic, because Arden of Faversham, produced by Brave Spirits Theatre and playing at the Atlas, is a killer show boiling over with adultery, deceit, and (drum roll, please!) murder. The show is directed by Dan Crane, and the writer(s) are unknown geniuses from the Elizabethan era and may even include the illustrious Shakespeare himself.

The characters are spectacularly vivid, the crime is definitely a front page story, and this hidden gem from Shakespeare’s time period is a sparkling discovery.

Arden of Faversham, rather adorably played by Robert Leembruggen, is a wealthy, upper-class landowner who has two great loves in life: collecting further properties to expand his wealth and his fiery young wife, Alice. Unfortunately for him, his wife has caught herself a lover, Mosby, whose greatest crime is apparently not that he unlawfully loves, but that he comes from a significantly lower class. “But to dote on one such as he!!” Arden groans, doubly cut to the quick by the spurring of both his rather abundant self and his status. With time running out before the lovers are caught (unproved, unevidenced crimes are only libel and cruel suspicion, after all…), the duped Arden becomes a doomed walking target to the deadly spinning devices of the lovers and one very angry local man named Greene.

Victoria Reinsel plays the head-turning, passion burning, wanton wife, Alice, in a wonderfully believable, gut-wrenching and compassionate performance. Alice runs the gamut of emotions often chalked up to womenkind–plus many more besides–some of which she assumes in order to toy with her foolish husband and some of which are genuine responses to her state as a woman with a torn heart and split loyalties. Real tears sparkled in Reinsel’s eyes as Alice wept at once point for all that gets lost and destroyed in the endless plotting.

Willem Krumich, who looks like a younger Lassiter for anyone who has ever watched Psych, plays the delicious and illicit lover, Mosby. As soon as he opens his mouth to speak, you can hear the silken webs he must have spun with that voice and verbage of his to woo the woman he won. Krumich plays the dashing almost-villain with great acumen, and the interchanges between Mosby and Alice are intense and brilliant.

There can be no villainous action in a Shakespearean dramedy without some wonderfully bumbling baddies, of course, and whoever the unknown writers of this play were, they understood that golden rule. My favourite scenes involved the murderous cutthroats hired by Greene (himself persuaded to the deadly pursuit by Alice,) to do Adren in. When Black Will, played by Teresa Spencer, and Shakebag, played by Samantha Sheahan, strutted onto the stage in full gangster-punk-cockney glory, with Black Will sucking and popping on some serious lollipop ring bling, I thought I would fall out of my chair laughing.

“When was I so loooonnnggg in killing a man?” Black Will eventually moans, miserably slumping down in defeat. What should have been an easy pop-off job takes not one, not two, but five something attempts (I counted), and each attempt will keep you laughing as the bungling burglars mangle the murder.

The laughs don’t stop with Black Will and Shakebag, but continue through the rest of the stellar cast as their characters valiantly struggle through the schemes of Alice and Mosby and get tangled up in one painfully hilarious situation after another. And really, as Black Will points out, murder would be so much easier if it were only legal…

The show is not all fun and games, though: murder is a serious business and crime takes its toll. There are also some deep undercurrents flowing through the show, from questioning how women are portrayed through the ages to what it really means to love and to wed.

One of the highlights of the show for me was the way each of the characters handled the language. Although the costuming was modern-day dress, the language remained Shakespearean. The delivery of the language was clearly considered as carefully as lighting, sets, and costume were; each character took the old English and modernized it through intonation and manners so that the implications of their speech could not possibly be misunderstood. Various accents and gestures added a whole extra dimension to the language that it really was a pleasure just to listen.

Although the soundtrack did not always seem to fit the scenes, the choice to use a minimal set and modern clothes was great, and the lighting was such fun at times it could have been its own character. Over all, the characters are spectacularly vivid, the crime is definitely a front page story, and this hidden gem from Shakespeare’s time period is a sparkling discovery.