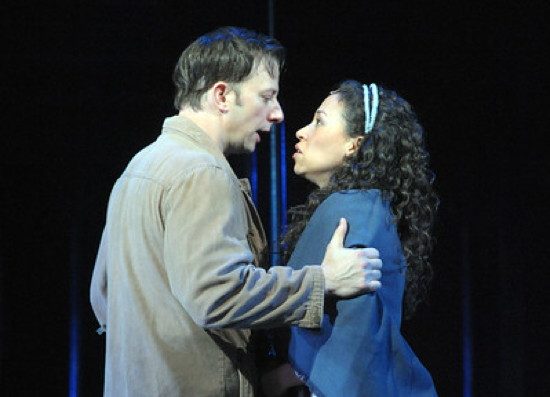 Similar to other Rodgers and Hammerstein musical classics, Carousel, now playing at the Olney Theatre Center’s Main Stage, offers memorable music combined with a serious theme that hovers over the production like a gray cloud.  The Sound of Music, The King and I and South Pacific are prominent examples of their work that interweaves sobering social, political and economic issues of the day including paths to redemption with their fine scores.

With Carousel, the 1945 musical and the second effort for Rodgers and Hammerstein since their immensely successful Oklahoma, the plot line involves a slew of bad choices, domestic violence, unspoken love, crime and suicide.  But the blatant sexism laced throughout, which may have been acceptable 70 years ago, would also have been a major point of controversy had the show been launched in the modern era.

…well performed and between that and the music, it’s worth a ride.

Olney’s artistic director Jason Loewith helmed the production, which he said was personal since the first time he heard “Soliloquy”—an emotional aria about impending fatherhood sung by the central figure in the show, Billy Bigelow—he had always wanted to direct Carousel.

Carousel is not one of my favorite musicals in the way the plot’s darkness and sporadic humor is structured.  Nonetheless, Mr. Loewith assembled a talented cast that duly does the show justice especially in the performance of Carousel’s top tier songs: “If I Loved You,” “June is Bustin’ Out All Over,” “Soliloquy,” and one of the best songs of all time, the spiritual “You’ll Never Walk Alone.”

Ably supporting the superb vocalists is Christopher Youstra who leads the 12-piece orchestra, the largest in Olney’s history.  They sit high above on a platform atop of a symbolic carousel (sans animals) on stage left, which forms the focus of the set designed by Milagros Ponce De León.

Adapted from Ferenc Molnár’s 1909 play Liliom, Richard Rodgers who composed the music and Oscar Hammerstein II who wrote the book and lyrics, Carousel is set on the New England coast in 1900.  The main character is the anti-hero carousel barker Billy Bigelow (played energetically by Telly Sessions) whose romance with mill worker Julie Jordan (Carey Rebecca Brown) comes at the price of both their jobs.

Where Billy is boorish, hot-tempered, and violent, Julie is gentle, sweet and sentimental. She is keenly aware of Billy’s previous dalliances, which are an outgrowth of his seducing women to buy a ride on the carousel.  Neither can directly manage to express their love for each other but deep down they do. And despite Billy’s hitting her—an incident that haunted him but never apologized for even AFTER he died—she chose to stay with him.

To help support their unborn child, Billy is coerced by another unlikable chap, Jigger Craigin (Chris Genebach), to attempt a robbery.  It fails.  Jigger abandons Billy during the ensuing chaos, and rather than facing prison, Billy chose to commit suicide—the last of a series of bad choices—leaving Julie and their eventual daughter Louise (Maya Brettell) to carry on.

As the plot moves “up there” following Billy’s death, he is given a chance by the Starkeeper at redemption to help his sullen, lonely now 15 year-old daughter who is tormented by her peers because of her father’s past.  Even then, invisible, he messes things up by slapping her hand though she mysteriously felt it was like a kiss.

But Billy persuades the Starkeeper to give him one last chance. Unseen, Billy watches Louise and her high school graduation. Spiritually, he reaches out to his daughter urging her to believe in herself, and he is filled with pride as he watches Louise gain confidence. Turning to Julie, Billy says simply, “I loved you, Julie. Know that I loved you.”

A secondary plot line deals with mill worker and friend of Julie, Carrie Pipperidge (Dorea Schmidt), and her romance with ambitious fisherman Enoch Snow (Eugenio Vargas) who has big plans for a large family and a huge sardine plant that provided most of the humor in this otherwise somber tale.

Though the plot is rather weird, the potent score and the performances rendered by the cast make attending the show worthwhile.  Mr. Sessions is convincing in making Billy difficult to root for though somehow you try.  Bursts of temper with threats of impending physical violence punctuate his role.  This is not your Ralph Kramden’s “You’re gonna go to the moon, Alice” bravado.  Billy’s threats seem real and scary.

An athletic-looking figure with a commanding voice, Mr. Sessions possesses the physical attributes to convincingly portray Billy’s intimidating persona.  He demonstrates strong range in his vocals hitting the toughest of notes but tamps down his muscular voice enough in the duet with Ms. Brown in the classic romantic number “If I Loved You” whereby the couple’s voices meld splendidly.  Mr. Sessions is strong in the emotional seven-minute long “Soliloquy” near the end of Act I and “The Highest Judge of All” in Act II.

Ms. Brown as Julie acquits herself very well in the duet with Mr. Sessions as well as in the introspective song “What’s the Use of Wond’rin’” in which she rationalizes her staying with Billy despite his abusive behavior.

Another iconic number, “June is Bustin’ Out All Over” sung by Delores King Williams as Julie’s cousin Nettie, Ms. Schmidt and the chorus is performed exceptionally and is one of the Carousel’s few high-tempo songs in the ballad-heavy score.

However, the highlight of the show is Ms. Williams’ rendition of “You’ll Never Walk Alone.”  Her pitch-perfect operatic voice will send chills down your spine upon hearing it.  Bravo for that performance!

Eileen Ward as Mrs. Mullin, the widowed owner of the amusement park and a woman who had designs on Billy even while he was married performs well as does Chris Genebach in the dual role of the Policeman and the iniquitous Jigger who exploits Billy’s weaknesses.

The remainder of the company performs excellently under Mr. Loewith’s direction.  Tommy Rapley’s choreography is smooth and stylish, and the rather lengthy emotional ballet duet with Ms. Brettell and J. Morgan White, playing the role of Carnival Boy, was in sync and beautifully executed.

Costume Designer Seth Gilbert does a wonderful job in fitting the cast in period garb, especially the Victorian-style dresses worn by the women.

Besides the carousel on the stage, Scenic Designer Milagros Ponce De León added a large circular clock at the rear, a rounded arch surrounding the stage and a projection screen to denote in hazy, misty images, the New England seaside setting.

The one major flaw in the production was the sound.  Some performers noticeably lost their mics’ audio, and there appeared to be some dead spots on the stage causing the sound to be uneven.  Hopefully, these problems will be remedied for future performances.

Carousel is not an uplifting musical compared to other Rogers and Hammerstein’s works.  But it is well performed and between that and the music, it’s worth a ride.

Running time: Approximately Two hours and 40 minutes with an intermission.

Advisory: Carousel contains adult themes and is not suitable for children under 12.