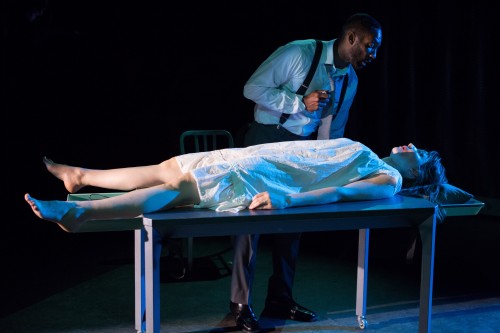 I can think of no more timely or masterfully presented play to recommend anyone go see than Factory 449’s riveting rendition of Radha Bharadwaj’s Closet Land, directed by Rick Hammerly, and now playing in the intimate black box at Anacostia Arts Center. In a time when freedom of speech and questions of life, of civil disobedience and the authority of governments swath us in news from around the globe and even our own backyards, this violently upsetting, deeply disturbing production has the power to transform the way we see the world and how we choose to act or not.

…it is a chair gripping, hair-raising, horrifically intense production that you cannot afford to miss.

With a plot set in an unnamed country in a time period contemporary with our own, the play is a two-character story of a Woman and a Man, neither named, who face off in a long series of interrogations in one set location—an undisclosed, secret prison. Although the play begins with the Woman already arrested, you quickly learn that she was taken from her bed in the middle of the night and arrested without reason, then blindfolded, molested, and taken to the prison. The Man’s goal is to get the Woman to confess to writing seditious materials—subliminal messaging in children’s books—against the unnamed Government, and the Woman’s goal is regaining her freedom.

As the play continues, however, the Woman’s goal begins to change shape and evolve, no matter how ruthless the Man, her Interrogator, grows in his attempts to get her to confess and to rat out her fellow rebels, whose identity is supposedly concealed in the innocent characters like a “rooster” in her children’s stories. She quickly learns he can break her body, but the question of the play is, can he also break her mind?

Sara Barker takes on the character of the Woman, a role that involves wandering down the murky, bloodstained path from being a childish woman who is at first bewildered by her sudden change of situation and painfully easy to manipulate, and into the inky black mind of someone who has discovered the hard way that her very body is no longer within her own power. When everything—home, hope, and even toenails—has been stripped away, will she have anything remaining of herself or left to fight with? Barker’s portrayal of the Woman was piercingly real. Barker managed to not only embody an innocence and shocking naiveté that we first find in the Woman, but then to abruptly squash that innocence, bring me with her into the inner sanctum of her imagination in attempts to escape from torture, through the delirium of pain, and into a new creature forged there in that dark prison—and she did it without leaving any door open to doubt that everything the Woman in that interrogation cell experienced was very, terribly real.

David Lamont Wilson plays the unnerving role of the Interrogator, the Man who ruthlessly stops at nothing to get the confession the Government wants from the Woman. “And even if you weren’t guilty, we’ll make you guilty before you leave,” he chillingly comments once, barely hinting at the arsenal of torture he has in store for her. Where I admire Barker’s willingness to be vulnerable as an actor in a role that is painful, dangerous, and could very well crush a spirit attempting to embody it, I equally admire Wilson for daring to take on the cruel, heartless role of a Man who molests, psychologically torments, and brutally tortures. He ably takes on this incredibly vile character, and then the character himself plays many different roles as he mercilessly toys with the Woman’s mind, senses, and emotions to win his end game. Wilson must have gotten a workout as an actor running through so many facets of being, but the effortlessness in which he plays the character of the Man demonstrates his versatility as an actor and his command of character creation and development.

A play revolving so closely around a brutal interrogation seems a little unusual in the entertainment world. “I chose the play itself because I thought it would challenge an audience and speak to a universal issue: the abuse of governmental power and its effects on so many people around the globe, especially freedom of speech, which we are ensured (mostly?) in our country,” Hammerly told me, when I asked him about his choice of play.

Speech and words themselves certainly lie at the heart of both characters’ defense and offence. Wilson’s character twists and turns words from recognizable, friendly beings into dark and terrible implications, playing with the deadly imagination of fear that is suspense. “It’s the suspense that’s the worst,” the Man purrs at one point, bending down over the Woman. The Man’s language throughout the story is laced with words that create his desired effect of terror on the Woman, as in one scene where he strokes the top of a burning grill and talks softly to her of fried chicken, of plucking feathers while holding the warm, pink flesh in a firm grip as he asks her again who the Rooster is representing in her fiction—using his descriptive word choice and seemingly inane conversation to paint a picture in her mind of the roasting, plucking, and terrorizing he might soon do to her own body. He shows her again and again the way words can be bent and the danger they hold—whether you intended them that way or not. “It’s better to have no ideas than half baked ones,” he notes, wryly.

The suspense of the Man’s next moves and the Woman’s responses are as riveting to the audience as imagining the next possible torture device and the pain it might inflict on her is to the Woman. I certainly learned to anticipate the pain, wincing ahead of time as the Interrogator moved his hand or opened his mouth to strike her in his next move. Tearing my gaze away from the scene at one point, I glanced around the audience and saw mirrored there my own self in the flinching, blanching, the twisting hands and nerves twitching on end. Rick Hammerly’s production of Closet Land is as much an experiment on tolerance and the ability of an audience to passively sit and watch the stripping of freedom and identity from a fellow human being as it is an exploration of the nature of pain and violence, the language of humanity, and the boundaries of the imagination.

A great part of this exploration and the success of the production in enveloping the audience in fascinated horror is no doubt the brilliant and simple design of the set combined with costuming, lighting, and sounds. You could say it is unreal, how real it feels, when you walk into the thick black of the theatre space and sit, squared off around the tiny, area-carpet sized space of stage in one of only 32 seats, and sitting bound and trembling in a thin white nightgown is a terrified, blindfolded woman next to a metal table. This play is all chills and bloodcurdling screams from the very first moment, and while the stage area itself is small and restricted, the play makes use of the ring around the room, behind the audience, with the result that we are not only up close to the interrogation—an arm’s length from reaching out and perhaps saving the Woman from the next terrible device—but we are also in the room, surrounded by the sounds of clanking metal, grinding clogs, wolf whistles, and the intensifying clamour of fear and the despair of entrapment.

“I staged it in the round and right on top of the actors because I felt this would make the audience feel complicit in some way to the wrongs being done to Sara Barker’s Woman. Shouldn’t we stop this? Speak up?” Hammerly noted, and I’d have to say he certainly created that effect on me, though I chose to sit on my hands and swallow the bile in my throat rather than interrupt the show.

As the Woman’s body breaks down between the physical and psychological torture and the endless brainwashing she—and we—are forced to endure, we are able to escape with her deep into the recesses of her mind. This again is an effect brought on not only by the strength of Barker’s acting as she allows her character to fracture and break, but also through the particular costuming, the play of lighting and shadows, and the brilliant use of the small space.

We all know that real theatre is never limited to entertainment alone. Theatre and art have the power to draw an audience in and away, to experience a new world or the same world but anew, and in so doing, also cultivate in viewers a new understanding, an empathy. In this way, theatre can not only provide an escape or a magical experience, but also perhaps effect a transformation that is not limited to the characters or cast and crew, but extends out into the lives of audience members alike.

There is no question in my mind that Hammerly’s production of Closet Land is one of these transformational productions. The near lyrical script, the realness of the scene and setting, the raw display of the power of the human mind and the flame of will and resistance, and the sweeping but controlled emotion of the cast who bravely took on these terribly broken characters—it is a chair gripping, hair-raising, horrifically intense production that you cannot afford to miss. Go witness the resilience of the human spirit and see for yourself how this powerful play completes.

Closet Land is playing at the Anacostia Arts Center now through May 10, 2015. Performances are Thurs-Sat at 8pm and Sundays at 3pm. Seating is limited to a maximum of 32 seats per performance. Tickets are $22 and can be purchased online. Click here for more information or call 202.355.9449.