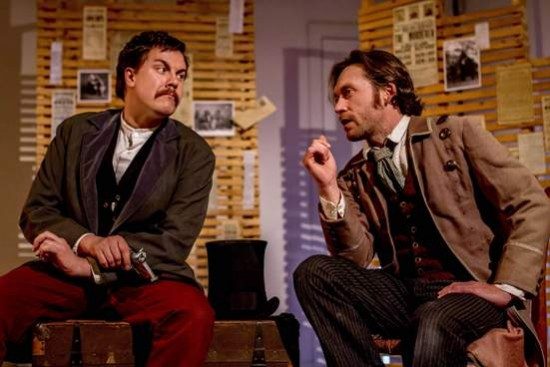 This year marks the 150th anniversary of President Abraham Lincoln’s assassination by one John Wilkes Booth. Ford’s Theatre devotes much of its programming and events toward Lincoln and his legacy (and rightfully so), but until now, there hasn’t been a full evening of theatre devoted to the man who shot Lincoln. It took the ever racing and twisted brain of actor Joe Brack to write a haunting and often moving new play called Don’t Die in the Dark, which gets inside the head of John Wilkes Booth after the assassination as he hopes to seek refuge in a barn.

Booth (Joe Brack) is a tortured soul and often compares himself to Brutus from Julius Caesar. He is basically against everything Lincoln stands for including his Emancipation Act that would free all slaves.Throughout the course of the play Booth is reminded by many characters played by Guitar (Bradley Foster Smith) that he will never be as good of an actor as his brother Edwin Booth. I guess if you hear that enough it will mess with your head. We also learn about Booth’s devotion to the union and in an unexpected and most poignant moment, about his vulnerability. This comes at a point when Booth hears what the New York Times said about the assassination. Booth is never mentioned by name in the article. Here is where you see that even an assassin has feelings. He never shows any remorse for what he did but I guess he’d hoped to be noticed for it a little bit more than just being referred to as a nameless killer.

Even though Joe Brack is the writer and star of the piece, this is by no means a vanity production. First off, playing opposite Brack is two-time Helen Hayes Award nominee Bradley Foster Smith. Smith, as previously mentioned, portrays multiple characters such as members of the press and the sergeant that kills Booth but he also plays multiple instruments which include harmonica, Jew’s harp and guitar, plus singing as well. It takes a certain type of actor to share the stage with the larger than life personae of Joe Brack but Smith with Brack make a fantastic team and play off of each other in perfect harmony.

I have often said that I equate Joe Brack’s stage personality to that of Zero Mostel because he has a big commanding larger than life stage presence. With Don’t Die in the Dark, Brack delivers a multi-textured and multi-layered performance. You get inside the mind of one of the most notorious people in American history because of the way Brack portrays him. Anyone that commits an act of assassination has to be complex to begin with and Brack’s portrayal really helps you to understand what might have been in Booth’s head.

Director Matty Griffiths’s staging lets the two actors really dig into the material. The direction is just enough to give the actors guidance without overpowering the material, which in turn, keeps the audience fully engaged all the way through.

The gallery space at Studio 1469 becomes Booth’s place of refuge through many professionals. The minimalistic four wall set designed by scenic consultant Maggie Modig is adorned with clippings from Booth’s career as an actor. The period props are designed by prop god Kevin Laughon and the costumes are supplied by Deb Sivigny. Lighting designer Marianne Meadows does wonders with mood lighting in the gallery space and with so few lighting instruments too.  Here is an example of what happens when you hire the right person for the job.

Overall, Don’t Die in the Dark has everything going for it. History buffs will appreciate hearing more about Booth, while theatre geeks can appreciate the fine acting and production. Simply put, It’s just good theatre….that is all.

Advisory: Studio 1469 is a bit tricky to find. The theatre’s address is 1469 Harvard St however the entrance to the theatre is actually on 15th between Harvard and Columbia. Look for signage on the sidewalk before proceeding down an alley to the theatre space.