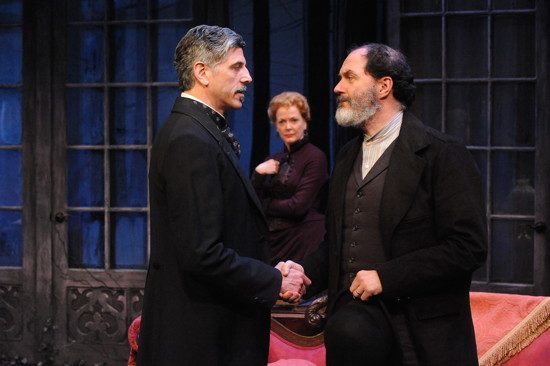 Ghosts by Henrik Ibsen, translated by Nicholas Rudall, at Everyman Theatre brings Victorian values, beliefs and morality to downtown Baltimore city. With direction by Donald Hicken, Everyman’s production pulls us back to a time when extramarital dalliances, if caught, could destroy reputations and crush souls, and it skillfully immerses the audience in this restricted world.

Written in 1881, Ibsen wrote Ghosts well-knowing that it would cause agitation in society, but it was an alarm he felt was essential: “If it did not so, it would not have been necessary to write.” At first, a large volume of copies were returned to the publisher because people were outraged by Ghosts’ subject matter of incest, sexually transmitted disease, attacks on religion, support for sex without marriage and prostitution. Small theatre productions of Ghosts ran from 1882 until 1899, and it wasn’t until 1982 that Ghosts played to a big theatre on Broadway, starring Kevin Spacey.

…Everyman’s production pulls us back to a time when extramarital dalliances, if caught, could destroy reputations and crush souls, and it skillfully immerses the audience in this restricted world.

Ghosts is about a rich widow and mother who, because of restrictive societal and religious views, keeps her late husband’s indiscretions a secret. But when her only son returns home with a terminal disease and wanting the truth about his father, she realizes she must fight against society’s rules to try to save her dying son.

The shocking subject matter is hardly shocking now, so the play must stand on it’s own story-telling merit, and Everyman’s production has it in spades. Deborah Hazlett as the mother, Mrs. Helene Alving, embodies a grief-stricken but strong women. She deftly carries the play, and the other characters revolve around her as they present themselves: a domineering and righteous Pastor Manders (a solid James Whalen), a sleazy money-hungry Jakob Engstrand (played flawlessly by Bruce Randolph Nelson), a young innocent, Regina Engstrand (a believable Sophie Hinderberger) and a son, Osvald Alving, whose life of privilege and travel has caught up with him (a convincing Danny Gavigan).

The story is played out in front of one of the most beautifully done sets I have ever seen. Daniel Ettinger’s set is a perfect vision of a large Victorian parlor, with its red velvet couch, heavy wood table with stout high back chairs and the back of the set lined with floor to ceiling windows looking out to leaf-stripped trees. The most amazing thing about this set is that the constant rain the story calls for is there, falling against the windows and streaming down the panes of glass. This effect is skillfully enhanced by Stowe Nelson’s sound design and Harold F. Burgess II’s lighting design. David Burdick’s costume design is well done, and Hazlett’s dress is a work of art.

Again, Ghosts will hardly shock most people today, but Everyman’s production makes the story worth seeing.

Running Time: Approximately 2 hours and 15 minutes with one intermission.

Advisory: Adult themes and production contains the use of theatrical haze and herbal tobacco.