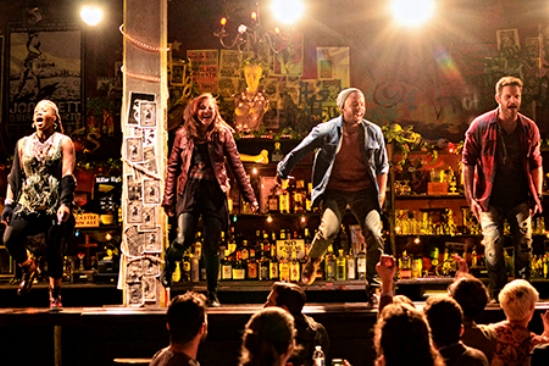 Sometimes you go to see a production and you can’t help but think the whole time you are watching it, “Gee, this reminds me of…” This is the feeling I and you might get as you watch the musical Murder Ballad at Studio Theatre.

This is not your typical piece of theatre going by any means. You enter on the P street side of the theatre and go down an alley to get to the show. After the four flights of stairs (elevator is available upon request) you walk into the fourth floor theatre space, which has been transformed into a full dive bar. It is complete with pool table and a sign to the restroom that reads something like “Old Beer Deposits Here.”

This is not your typical piece of theatre going by any means.

All of this atmosphere as designed by production designer Brian Macdevitt and set director Andrew Cohen with atmospheric lighting by Andrew Cissna leads you to think that you are in for a one of a kind experience.

Then the show starts and you have four very talented performers singing their hearts out with a song cycle that tells a story that is less than exciting. There is a narrator (Anastasia McCleskey) telling us the tale of woe about Sara played by Christine Dwyer. Sara was in love with a bartender named Tom (Cole Burden), but wanting something better for herself than the bad girl image she has had, she meets Michael (Tommar Wilson). They marry and have a kid named Frankie, but as the story goes on you come to realize that Frankie was conceived to help save the marriage and Michael really isn’t in love with Sara. It doesn’t help matters that Tom and Sara still have feelings for each other.

Performance wise the cast is first rate. Christine Dwyer as Sara has a big powerful voice throughout on such numbers as, “I Love NY” and “Turning into Beautiful.” You do have to feel sorry for her character. Here is a woman that wants something better and keeps getting sucked back to her past.

Anastasia McCleskey guides us through the trials and tribulations of our characters with a huge belt, but it also has plenty of intention behind it. In other words it’s not all volume. “The Crying Scene is one of her particular vocal standout moments.

Tommar Wilson really shines as Michael in, “Walk Away” and his chemistry with Dwyer gives you the impression that the two are in love with each other, at least on the surface.

Cole Burden’s Tom high point vocally would have to be a duet with Dwyer called, “You Belong to Me,” and he does show us that even though things haven’t worked out before, he wants to give it another try.

Now, I have talked about many good things in this show so far. We have all the atmosphere, popcorn and pretzels on the table and a great cast plus a dynamic four piece band under the direction of Darren R. Cohen playing Justin Levine’s orchestrations with a really hip groove.

Director David Muse uses every inch of the space itself to full advantage including having actors perform whole scenes on top of the bar and pool table.

All of this is well and good but if you strip out the production elements and talent, you are left with a score that just sounds like too many other things. Juliana Nash (Music and Lyrics) and Julia Jordan’s (Concept, Book and Lyrics) material is very derivative of Rent and Next to Normal in style and tone plus there is a flatness to it that leaves you feeling a bit underwhelmed to say the least.

Overall, Murder Ballad has everything going for it in the way of production and performance.  I just wish the material was more on the original side to match.