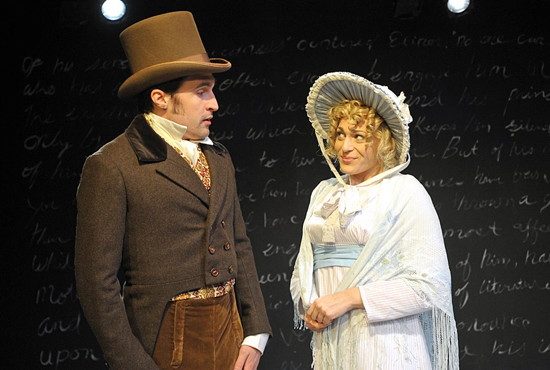 Annapolis Shakespeare Company’s production of Jane Austen’s Sense & Sensibility, adapted by Jon Jory and directed and choreographed by Sally Boyett, is as charming as it is skillfully performed. The actors engage in a subtle and graceful dance of rotating scenes, moving props and changing emotions. The overall effect is delightful.

Jane Austen’s book Sense & Sensibility was published in 1811 under the pseudonym “A Lady” and was her first full-length novel, originally entitled Elinor and Marianne. This story features the two Dashwood sisters, one with sense and decorum, Elinor, and the other sister, Marianne, placing her sensibilities before the proper manners young women were expected to follow during the Regency period in England.

The actors engage in a subtle and graceful dance of rotating scenes, moving props and changing emotions. The overall effect is delightful.

The story begins when the Dashwoods are expected to leave their large manor house after the death of their father. Ownership of this particular piece of land was limited to males only, so the Dashwoods had to leave their lifetime home when the property went to the next male relative. But before they leave, the two sisters meet the men they are going to marry. They must battle through manners, previously betrothed situations and crushed hearts to their happy endings.

Rebecca Swislow as Elinor Dashwood completely immerses herself in the role of the older sister choosing to hold her intense love for Edward Farrars close to her chest. She would rather suffer in silence than to let her love be known and in doing so, forgetting propriety like her sister Marianne. Swislow’s accent never wavers nor does her commitment to her character.

Laura Rocklyn plays Marianne Dashwood as an emotional character who must struggle with the idea of putting propriety before love. Rocklyn does this well.

Patrick Truhler plays Edward Farrars and is amazingly charming and earnest in his love for Elinor. James Carpenter as John Wiloughby (Marianne’s love interest) did a great job of playing a character that is mostly ruled by his emotions. I would have liked to see more of Amy Pastoor, who is delightful as Elinor’s secret adversary, Lucy Steele.

Brian Keith Macdonald is adorable as John Dashwood, who must keep his shrew of a wife, played by the talented Renata Plecha. Sue Struve was a pleasure to watch as the mother of the sisters, Mrs. Henry Dashwood. Richard Pilcher, Jean H. Miler, Annette Mooney Wasno and Joel Ottenheimer (as Colonel Brandon) all added their talents to keep the production moving along and enjoyable.

The costumes by Kat Mckerrow are wonderful to look at and help set the time period well.

Sense & Sensibility is one of my favorite novels, and Annapolis Shakespeare Company’s cast and production crew does a superb job of bringing the story to life.