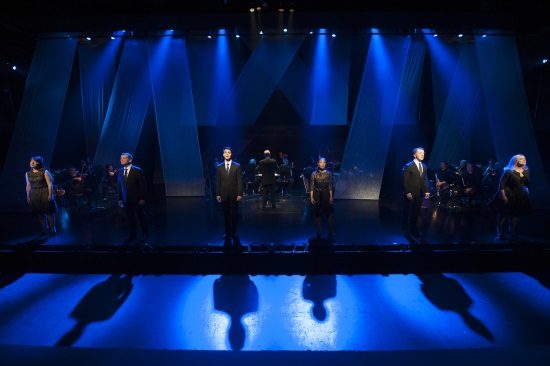 The cast and orchestra of Simply Sondheim.
Photo by Margot Schulman.

I don’t know of many theatres that have an association with one composer/lyricist the way Signature Theatre does with Stephen Sondheim. For all of its 25 year history Signature has produced at least one Sondheim musical per season. This season they started things off with Sunday in the Park with George and now, for the next two weeks only, is presenting a brand new revue entitled Simply Sondheim. Unlike other Sondheim revues, this one was created specifically for Signature Theatre by David Loud and Signature’s Artistic Director Eric Schaeffer and with the permission of Stephen Sondheim himself.

Simply Sondheim at Signature Theatre lovingly highlights a long collaboration between a theatre company and a god like figure of musical theatre.

There are a couple of things that make this revue stand out. The first is the choice of material. I like hearing songs from West Side Story, Gypsy and someone sing Send in the Clowns as much as the next guy, but hearing a gorgeous David Loud six part harmony arrangement  put to “I Wish I Could Forget You” from Passion gets me really excited. A few other little heard gems include “Goodbye for Now” which was written for the movie Reds and sung beautifully here by Kellee Knighten Hough. If you don’t remember the lyrics from the movie, it’s because the melody was only used in the finished film. Hearing songs cut from a Broadway show gets my inner musical theatre geek on so putting “Who Could Be Blue” and “Little White House,” which were both dropped from Follies into this revue, is a definite plus as are the vocal stylings of Stephanie Waters and Austin Colby.

Of the better known performed songs, a few in particular stand out. The first one is “The Ladies Who Lunch” as performed by Signature veteran powerhouse Donna Migliaccio. Her interpretation proves that you don’t have to growl this song the way Elaine Stritch did originally for it to land properly. Next up would be the light on his feet and oh so likeable Bobby Smith with “The Right Girl” from Follies. He makes it look so easy in the way Fred Astaire used to in those MGM musicals, smooth and classy. Then we have Paul Scanlan delivering a terrific Finishing the Hat from Sunday in the Park with George. I’d love to see Scanlan get a shot at the lead role in this show sometime. That voice is just incredible.

Of the group numbers, one of my favorites is “Someone in a Tree” from Pacific Overtures. You might know that this particular show is usually performed with an all male cast. Bobby Smith, Austin Colby and Paul Scanlan are joined by Donna Migliaccio in this version and I think it adds an interesting take while showing off Migliaccio’s strong lower register. “The Hills of Tomorrow” from Merrily we Roll Along as arranged by David Loud soars, and “A Weekend in the Country” from A Little Night Music, as staged by wunderkind director/choreographer and Signature Theatre’s Associate Artistic Director Matthew Gardiner, gives us a strong act one closer.

Besides Signature Theatre’s 25 year association with Sondheim, here are two other longtime Sondheim collaborators on this show that I want to point out. David Loud goes back with Sondheim to 1981 when he performed the role of Ted, the onstage pianist in the original production of Merrily we Roll Along. Since then he has musical directed Company and Sondheim on Sondheim at Roundabout Theatre Company. For the latter he also created the arrangements for. He recently created  A Good Thing Going: The Stephen Sondheim and Harold Prince Collaboration for the acclaimed Lyrics and Lyricists series at NYC’s 92nd Street Y.

Stephen Sondheim has always said that Jonathan Tunick is the best orchestrator ever. Maybe that’s why Tunick has been associated with Sondheim for what is coming up on 45 years. Going all the way back to Company in 1970, Tunick has orchestrated pretty much all of Sondheim’s musicals with the exceptions of Sunday in the Park with George and Assassins. That is until now. With Simply Sondheim we get to hear Tunick’s take on “Something Just Broke” from Assassins and “Finishing the Hat.” With no disrespect to Michael Starobin, it left me wondering what those two shows would sound like with a full Tunick scoring job. Tunick has also orchestrated a newly created overture for this production while reducing some of his original charts as well. Everything under this master orchestrator sounds as good as ever.

There is a sixteen piece orchestra conducted by Signature’s Resident Musical Director Jon Kalbfleisch that plays Tunick’s charts to musical perfection. The reed one player Al Regni played many shows scored by Tunick in NY, so it’s great to see him playing on this production. Stay for the exit music and hear the orchestra swing you home with a section of the overture from Merrily we Roll Along.

If there was one thing needed to make this revue complete for me, it would be some narrative between the songs. I would have enjoyed hearing about Signature’s history with the material and with Sondheim in general. It would give us that little extra and highlight each of the numbers as well.

Despite that quibble, I do recommend that you get a ticket to Simply Sondheim for three reasons. The first is because once the run finishes at Signature Theatre you won’t be able to see it again ever. Sondheim is only allowing it to be performed at Signature Theatre for this quick engagement. Secondly, why would you want to miss any of the performers and a full orchestra? Lastly, here is a chance to hear some lesser performed songs from the Sondheim canon.

Simply Sondheim at Signature Theatre lovingly highlights a long collaboration between a theatre company and a god like figure of musical theatre. That’s a “Good Thing Going” wouldn’t you say?

Running Time: Two hours and ten minutes including one intermission.