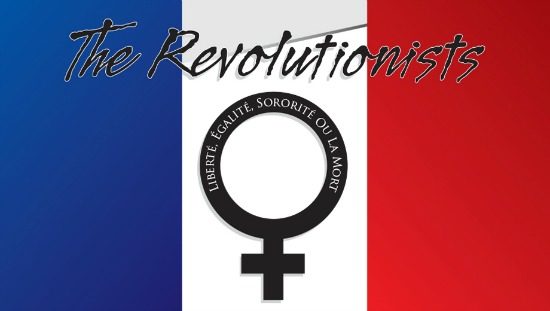 Women’s role in the French Revolution is generally remembered to be the image of the fictional Lady Liberty in the famous Delacroix painting, hoisting the tri-colored flag, leading the people to victory as her dress falls down.

The Revolutionists, a play by Laurie Gunderson, who wrote the award winning “I and You,” looks at a handful of real women of the era, though their interaction here is entirely fictional.

Its production over the weekend at Catholic University’s Hartke Theatre brimmed with ideas and humor and strong acting from its largely female cast.

The play is notable if only to remind us of the existence of Olympe De Gouge, a playwright and activist of the era who wrote a Declaration of the Rights of Woman in 1791. She was never as well remembered as Charlotte Corday, who murdered Jean-Paul Marat, or certainly Marie Antoinette, played as ditzy as her wig is high.

The fourth central figure in the play is a Caribbean woman meant to remind us of the French holdings in the new world and is said to be married to Vincent Oge, a revolutionary in Saint-Domingue, the French holding that became Haiti.

There is much to be learned from these women, but the play is not presented as history as much it is a commentary on women’s plight, leavened with humor. The cast members talk in a kind of slangy modern tone and refer to one another as “girl!” as if in some contemporary sisterhood.

It may be a device to make the action relevant to modern audiences, but the modernist banter only serves to undercut the actual historical underpinnings. The most unfortunate aspect of the play is that it proudly appears to be unfinished. De Gouge is writing it as it goes along, and when the action takes a wrong turn, she says: No, we can’t do that; let’s try this. What should we do now?

The indecision rather directly reflects Gunderson’s own process — she was changing the script right up until the Catholic opening. And as refreshing as this breaking down of the fourth wall may be when it is done once, it gets tiresome — and just indecisive — after a while.

One thing she does know is that the guillotine will fall for all four by the end — which only makes the ending seem to stretch on a little long to prolong the inevitable, with every additional final speech or healing song tacked on.

Director Eleanor Holdridge wrings out fine performers from each of her female leads (the glum males who stumble in as executioners during act two, less so).

Kimberlee Wolfson is a spirited but sometimes frantic De Gouge; Latia Stokes a calming influence as Oge. Ciaran Farley has the right intensity for Corday and Teresa Catherine is a comic splendor as the former queen.

Aryna Petrashenko’s costumes seem well suited to the period without calling too much attention to themselves.

And through the whole thing, nobody waves a flag or loses their dress.

The Revolutionists ran from April 23-26 at the Catholic University of America Hartke Theatre.