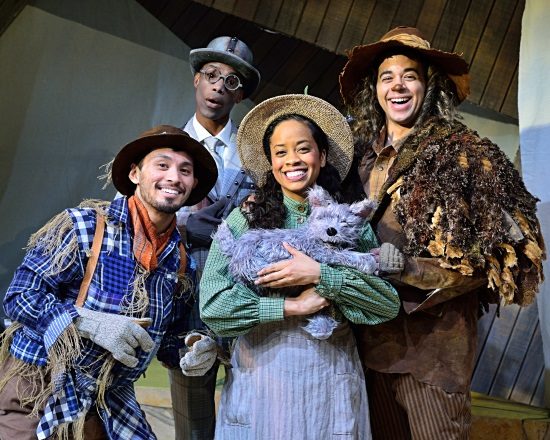 The cast of The Wonderful Wizard of Oz. Photo by Bruce Douglas.

Of all the whimsical renditions of The Wonderful Wizard of Oz that have come down the yellow brick road, there is none like the Adventure Theatre MTC’s dreamed-up production by Jacqueline E. Lawton and directed by Roberta Gasbarre. Playwright Jacqueline Lawton’s adapted version of the time-honored fantasy is a perfectly abbreviated, easy storyline for children to grasp with twists, surprises and original details such as Dorothy wearing silver slippers (as opposed to ruby-colored) to reflect L. Frank Baum’s 1900 novel. Top this off with a beautifully diverse cast that delivers lots of spunk, and you’ve got yourself an amazing performance that could be an award-winning phenomenon.

If you are ready to take a journey to see this familiar favorite with a fun new spin, just knock your heels three times and wish your way over to Adventure Theatre MTC for The Wonderful Wizard of Oz!

Paige Hernandez sparkled as bright as an emerald in her role as darling Dorothy. She was exceptionally charming, graceful and endearing. Hernandez’s priceless performance will have every young girl dreaming of her next special adventure “over the rainbow.” Henian Boone (Tin Woodman), what a performer! Boone’s rigidly robotic movements were ultra-realistic; his character was quite humorous and his performance more than remarkable.

Alex Vernon was outstanding not only as Uncle Henry, but as Wizard of Oz, and King of the Winged Monkeys. It takes incredible acting ability to pull off several characters in one production, but Vernon was “all-in,” –emerald glasses included- without ever skipping a beat. Thony Mena was amusing to watch as the cooky, Cowardly Lion. Ryan Dalusung as Scarecrow was exceptional in his performance, while Sarah Olmsted Thomas (Glinda, Good Witch of the South) and Maggie Erwin (Aunt Em, Good Witch of the North) were both enjoyable, bringing sprinkles of magic and mysticism to the stage.

Lydia Francis’ simple and uncomplicated set design allowed for the actors to flow freely around the stage and for young audiences to focus on the plot without too many distractions. Tyler Gunther’s costumes were appealing pieces with lots of creativity, color and pizzazz.

The cast was fantastic at creating a storm-like atmosphere through their fluid movements. By using audible wind-like sounds and other effects that tickle your senses, the cast stretches your imagination to the point where you feel that you are actually in the midst of a tornado. Their use of gigantic gestures and fearlessness to work every inch of the theatre made the cozy space seem grand. The cast showed amazing skill in puppetry arts when performing as the Munchkins and Toto. The cast interacted with the audience during the production, which is always a pleasure.

If you are ready to take a journey to see this familiar favorite with a fun new spin, just knock your heels three times and wish your way over to Adventure Theatre for The Wonderful Wizard of Oz!