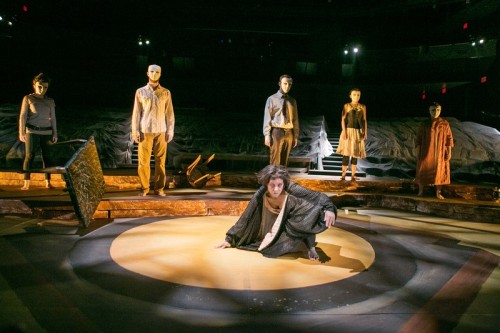 There is nothing very hard to see about the fabulous creepiness of the production, Very Still & Hard to See, written by Steve Yockey and now playing with Rorschach Theatre under the direction of Randy Baker at Atlas Performing Arts Center. From the moment of queuing to enter the theatre space, we were greeted by a ghostly looking bell boy who took us into the elevator for the long ride up to the “hotel.” Along the way, we stopped at a floor where some zombies came aboard and walked right up to us, actually breathing down our necks.

…a magnificent and utterly riveting production and, if you can handle an evening case of the creeps, you should definitely go catch it.

Very Still & Hard to See is a collection of loosely connected stories about broken relationships and love gone terribly awry, which unfold in or around a grand hotel by the sea. This hotel is haunted not only by the spectres of those whose room became a tomb, but from deep within its very foundation where a possibly cannibalistic she-creature, Obake, dwells, sewing her machinations into the fabric of guests’ lives. During the hotel’s construction, the Obake, played by Yasmin Tuazon, forces the architect, Buck, played by Colin Smith, to strike a horrible deal with her in exchange for his life.

Going into the theatre, I had no idea about the creep level involved in the production, and I am one who usually hides behind a couch peering out to see shows like The Walking Dead. While I very definitely jumped in my seat, had several cases of chills and goosebumps, and audibly gasped on a number of occasions, I could not look away from the surreal unfolding scenes. The passion and very gravitas with which each of the actors portray their characters was spellbinding and utterly devastating, whether you entirely understood the mysterious events unfolding in the scenes or not. And strange things did occur that you and the characters alike struggled to wrap your mind around, like kitchen floors opening into bottomless holes, or ocean storms that raised giant monsters from the sea, or simply ghosts who are especially possessive.

Character names seldom came to light, and with nearly all the actors playing different parts (not always well differentiated by costume changes), it was easy to get a bit lost or not quite get something until later. I struggled with in the play with not always understanding what was going on because of the doubling up of characters and the connections between characters that were often formed. Knowing that the scenes are only loosely connected and not unfolding in a linear pattern would probably resolve that. There is no question, though, that the actors are brilliant. They were really able to showcase their abilities with the different characters and the absurdly fantastical scenes they took on.

I would love to know whether the title of the play is based on how what is really happening within the many beautiful and disturbing layers of the show is so very still that it is hard to see but perfectly there the whole time, or if it is a reference to what people drowning actually look like, or something else entirely–perhaps a reference to the mythology in the production.

Lighting, set, costumes, and stage direction were magnificent, if perhaps slightly overdone at times. Long before the show started, if the zombies in the elevator had not already gotten to you, the positioning of strange, faceless creatures around the theatre space probably did. “Don’t sit alone and make sure you keep your possessions close by,” we were warned on entering, and I was certainly glad to be surrounded by my fellow audience members rather than sitting on an aisle with a ghost, spirit, or otherworldly beings moving (or not moving!) beside me.

The costumes kept the storyline of the play within a single century, but allowed the interweaving scenes to move around time within that frame. They were unobtrusive and complimentary to the character’s personality or state of being. And the masks! The faceless creatures immediately made me think of the Kodama in the Miyazaki classic film, Princess Mononoke and as it turns out, there is a great deal of Japanese mythology in the script, including the nature of the Obake and the spirits I thought of as Kodama.

Lighting and music were used to full dramatic effect, as was the set which involved everything from mystic sea creatures rising before you to loom in the rafters of the building to empty spaces contoured entirely by lighting effects and sound. I would be remiss not to mention that the thought put into the way the actors move around the stage as ghosts and zombies, and especially as the faceless creatures, added a silky strand of consistency to follow in the elaborate web of the surreal. One of my favorite moments was when they broke out the spectral dancing on stage.

Very Still & Hard to See is a magnificent and utterly riveting production and, if you can handle an evening case of the creeps, you should definitely go catch it. Though wonderfully eerie, well-timed humour often lights up the darkest parts of the show and may even have you chuckling aloud when you least expect it, giving you a chance to revive from the heart-stopping moments a few beats before.

Advisory: Violence, supernatural, and adult themes with some language.

Very Still & Hard to See is playing at the Atlas Performing Arts Center, 1333 H St NE, through May 10, 2015 on Thursdays, Fridays, and Saturdays at 8pm, and Sundays at 3pm. For tickets click here.