“Chad Beckim’s Lights Rise on Grace at Woolly Mammoth Theatre Company proves that when you give familiar material a world class production, it is totally possible to create a fresh experience for the audience member.” – Elliot Lanes.

Synopsis: Lights rise on Grace, the daughter of Chinese immigrants, and Large, the young black man she loves. Lights rise on Riece, the sole bright spot in Large’s dark new world as a prison inmate. Lights rise on an unlikely family, bound by forgiveness but threatened by Large’s new desire. Lights fade on three souls, more than the sum of their stories and the past that won’t let go. 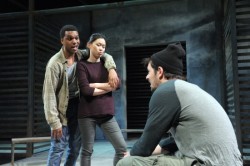 “…Everyman’s production pulls us back to a time when extramarital dalliances, if caught, could destroy reputations and crush souls, and it skillfully immerses the audience in this restricted world.” – April Forrer

Synopsis: One of the greatest stories in modern drama. Mrs. Alving has kept the sins of her late husband a secret for her entire life. But soon the ghosts of the past catch up to her when her only son arrives back home with a deadly illness, looking for answers. Trapped within the walls of Victorian society, this gripping and haunting tale tells the story of a woman trying to break through the lies and deceit from her past to save her estranged son. 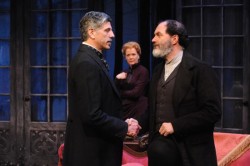 “Simply Sondheim at Signature Theatre lovingly highlights a long collaboration between a theatre company and a god like figure of musical theatre.” -Elliot Lanes 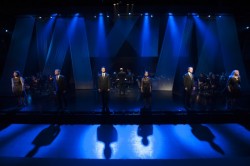 The cast and orchestra of Simply Sondheim.
Photo by Margot Schulman.

“The characters are spectacularly vivid, the crime is definitely a front page story, and this hidden gem from Shakespeare’s time period is a sparkling discovery.” – Heather Hill

Synopsis: Arden of Faversham, an Elizabethan true crime tragedy, is a play wrapped in mystery. Which playwrights collaborated on the play? Which scenes, if any, did Shakespeare write? What inspired the play’s creation almost forty years after the event it dramatizes? And why, since the script is so deliciously dark and funny, isn’t it produced more? Come be the judge as housewife Alice Arden plots with her lover and two spectacularly incompetent hit-men to murder her husband. 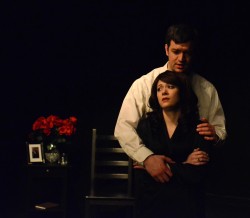 William Krumich as Mosby and Victoria Reinsel as Alice Arden in the production, “Arden of Faversham” by Brave Spirits Theatre. Photo by Kevin Hollenbeck.

“The actors engage in a subtle and graceful dance of rotating scenes, moving props and changing emotions.” – April Forrer

Synopsis: Sisters Elinor and Marianne find themselves captivated by two very different men in this lively and dynamic adaptation of Jane Austen’s classic novel. Sensible Elinor is charmed by the quiet, bumbling goodness of Edward, while passionate Marianne is swept off of her feet by the dashing and mysterious Willoughby. But when Willoughby’s scandalous past and Edward’s secret fiancee come to light, the sisters are forced to rely upon themselves and one another to weather their heartache — and learn that when sense and sensibility meet, love can’t be far behind. 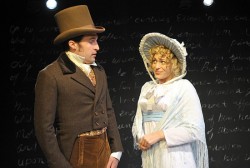