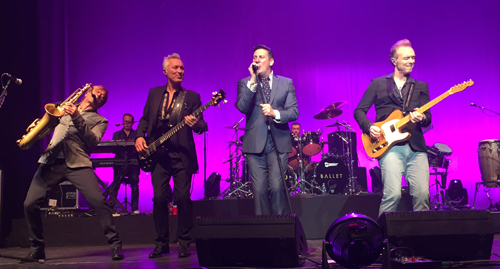 If you tell people you are going to a Spandau Ballet concert, the usual reaction is, “who?” “Remember the song ‘True?’” “Oh, YES! Loved that song! Whatever happened to them?” Maybe they will also remember “Gold.”

Spandau Ballet was one of the premier British New Wave pop groups of the 80s. They helped to spearhead the New Romantic movement – when fashion was as essential as the music – in London’s famed Blitz Club and shot to worldwide superstardom with their third album, True. The soulful, jazzy tribute to Marvin Gaye and unrequited love, the song “True” would define them forever in the United States, sometimes mistakenly as a one-hit wonder.

When multi-instrumentalist/sax player Steve Norman blew out his knee during a concert in LA, the friendship amongst the band members was so tight and his contribution so integral, they cancelled the rest of the tour, breaking the hearts of many a teenager. The band inexplicably never returned and American fans never thought that seeing Spandau Band play live again – or even for the first time – would ever be a possibility.

While it became a challenge to find their music on U.S. radio or in record stores, Spandau Ballet conquered the rest of the world, storming the globe and selling out arenas through the remainder of the decade. They amassed 25 million in record sales and 23 hit singles, including the iconic “True.” It reached #1 in 21 countries and #4 in the U.S. To most American listeners it is the only song they remember thanks to the fact that it has been used in numerous films, television shows and commercials.

There are many 80s bands currently touring but it is safe to say if there is one band you must see, this is the one. They are truly “Gold.”

In 1990, Spandau Ballet had a bitter breakup, which was compounded a few years later by an acrimonious court case over song royalties. Nearly 20 years later, the group put aside their differences and reunited for what seemed to be a final, sold out tour in 2009-10. Unsure of the response or even if people would remember them, Spandau Ballet did not come to America. This time around, they did not make the same mistake twice.

The band has been busy since their last tour, producing a documentary with first- time director George Hencken. The archival film covers their beginnings, from working-class boys who formed a band in 1976 while still in school, the huge success that followed, to their falling out and rise again. She whittled down an amazing 400+ hours of footage to less than two hours. Soul Boys of the Western World premiered in March 2014 at the South By Southwest festival in Austin, Texas and has been garnering solid, often effusive reviews worldwide. To paraphrase one critic, even if you weren’t a fan of their music, you will like this film. It premiered on April 29 in New York City with the band in attendance.

In support of the documentary and their new greatest hits CD, The Story: The Very Best of Spandau Ballet (which includes three brand new Trevor Horn-produced tracks), the band has embarked on an even bigger global tour that began in California with three sold out shows in January. They have just returned for another North American leg that started in Chicago and is winding up with three shows in the New York area. While they have been selling out arenas in Europe on this tour, the U.S. is getting treated to more intimate and up-close performances in clubs and theaters.

Playing for the first time ever in the D.C., the five original members of Spandau Ballet more than delivered at the 9:30 Club in D.C. Fans came not only from the area but beyond – Los Angeles, Louisiana and North Carolina, to name a few. They also brought along another extremely accomplished musician with them on keyboards and backing vocals. Toby Chapman not only toured with the group in the 80s, he has performed with Sir Tom Jones.

From the moment the band stepped on stage to the final bars of “Gold,” the evening was pure magic. Perhaps it was the intimate, no frills venue and great sound. This is no trickery or special effects – simply a pure and honest performance from a great band tearing it up for an enthusiastic, nearly sold out crowd.

It was hard to tell who was having a better time ­– the band or the audience. Their musicianship is so tight and, unlike a number of contemporary, young groups, Spandau Ballet are and always have been the real deal with an astounding catalog of music, penned by chief songwriter and brilliant guitarist, Gary Kemp. To steal a line from “True,” these 50-somethings could go “toe-to-toe” with any live band today and probably put most to shame. It doesn’t hurt that these “Angel Boys” have aged ever so gracefully. Though no longer sporting frilly shirts and big hair with shoulder pads to match, they are still stylish gents, appealing to an even younger generation of fans attending the concert.

Lead singer Tony Hadley is not only commanding in stature but he still has that powerful, iconic voice that is Spandau Ballet. If possible, it has become even richer and stronger with time. He is a vocal superman, singing nearly nonstop for two hours. Hadley also works the crowd like he always has – interacting with the fans and bringing them into his big, warm embrace.

While Gary Kemp did nearly all the songwriting in their 80s heyday, Hadley penned “Soul Boy” for the film and it is every bit melodically and lyrically as solid as their previous hits. In fact, all of the new songs, including “Once More” (which Gary Kemp co-wrote with Steve Norman as a love song to the band for their 2009 Reformation Tour), “Steal” and “This Is the Love” fit cozily alongside the older hits.

Steve Norman is a whirling-dervish of a performer who has mastered an array of instruments including the guitar and percussion but it is his soaring saxophone that brings cheers from the audience. He also provides supporting vocals, along with the Kemp brothers, Gary and Martin. Norman is a supremely talented musician with boundless energy as he jumps seamlessly from bongos to sax to guitar and back again.

After the band broke up, bassist Martin Kemp found success as an actor. The band’s manager originally recruited Gary’s brother because of his good looks. He is still devilishly handsome but this is not just another pretty face. The recordings don’t always do his work justice ­and­ this live performance showcased his musicianship.

The drummer John Keeble is a rock ’n’ roller at heart and provides the strong, tireless heartbeat to the repertoire. There is a brilliant moment in the concert where he and Norman on percussion and bongos, have a musical “conversation” on an instrumental version of “Glow,” one of their earliest recordings.

The band tore through nearly two dozen hits with the joyous abandonment of seasoned pros and the crowd was with them for every note. “Highly Strung,” “Only When You Leave,” I’ll Fly for You,” “Communication,” and “Instinction,” to name just a few.

A poignant moment in the show was an acoustic version of the ballad, “Empty Spaces,” with Gary Kemp on Jimmy Page’s two neck guitar and Tony Hadley never sweeter on vocals. They followed it with a short sing-a-long of “Gold,” just a tease of the blazing, full-version finale.

One of the highlights was the “Blitz” section of the concert, which was proceeded by their first hit “Chant No. 1 (I Don’t Need This Pressure On).” It was powerhouse homage to their pre-“True” beginnings as a four-to-the-floor, synth pop band and their late friend and owner of the Blitz Club, Steve Strange, who contributed to their success. “Mandolin,” “Confused,” The Freeze,” and “To Cut A Long Story Short” followed one after the other in high-energy medley that brought the house down.

Of course you cannot forget the song that is closest to everyone’s heart. “True,” became another enthusiastic sing-a-long with the audience often taking over with Hadley conducting the crowd.

The band ended the show with one of their biggest and best written hits, “Through the Barricades” – a love song written during the strife in Northern Ireland that became a worldwide anthem for tolerance – and a rousing, no-holds barred version of “Gold.”

Spandau Ballet has made a triumphant and long overdue return to America. There are many 80s bands currently touring but it is safe to say if there is one band you must see, this is the one. They are truly “Gold.”

Spandau Ballet, Soul Boys of the Western World Tour performed one night at the 9:30 Club in Washington, D.C. on April 28, 2015. They will be at the Beacon Theater in New York City tonight. For tickets and upcoming tour dates, go online.