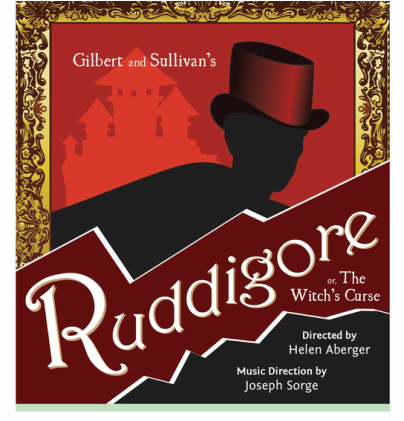 What’s in a name? Quite a bit, as Shakespeare asked and Gilbert & Sullivan discovered when they premiered Ruddigore in 1882. The Victorian Lyric Opera Company (VLOC) will present the rollicking story of Bad Baronets and young love threatened by a witch’s curse June 11-21 at the F. Scott Fitzgerald Theatre.

On the heels of the wild success of The Mikado, Gilbert & Sullivan debuted Ruddygore, chock full of ghosts, witches, their customary satire of Victorian peccadillos, and the usual triumph of young love. Audiences and critics were rather unimpressed. On top of the cool reception, Victorian senses were highly offended by the use of the word “ruddy” in the title because it happened to rhyme with “bloody,” far and away the most offensive word of the era. G&S altered one letter, and the title became Ruddigore. With this and a few other changes, the show enjoyed a respectable run and entered its place in the G&S canon.

The story begins with the first Baronet Murgatroyd of Ruddigore, who is cursed by a witch to perform a foul deed every single day or die in gut-wrenching agony. Centuries later, heir to the Baronetcy Robin Oakapple manages to escape this fate in his early years, during which time he falls head-over-heels in love with Rose Maybud. But Robin’s true identity is discovered, and he is forced to take on the title of Baron and a life of crime. Rose is far too proper a lady to attach herself to a criminal, so she settles for Robin’s best friend, Richard. Trying his new evil role in life, Robin’s ancestors reprimand him for failing to commit crimes heinous enough to satisfy the requirements of the curse. But all ends happily when Robin figures out how to overcome the witch’s curse.

This marks the fifth time in its 37-year history that VLOC has presented Ruddigore, and first-time VLOC director Helen Aberger promises a fresh approach. “Ruddigore is definitely the most melodramatic, topsy-turvy operetta of the Gilbert & Sullivan canon, and I’m excited to stage it as such,” she said. “It includes your basic love story (and then triangle), a witch’s curse, ghosts coming alive out of portraits, bridesmaids, sailors, a wedding–all fabulous dramatic elements–and turns the audience’s expectation of them on its head, both in subtle and obvious ways. We have a top notch cast and production team that will make this a fabulous show!”

Maestro Joseph Sorge, the show’s music director, said “Ruddigore’s music brings true emotion and personality to each character. This allows the audience to really connect to them all, more so than any of Sullivan’s previous operettas. This is especially apparent in Act II when Sir Roderic sings ‘When the night wind howls.’ It’s an exceptionally brilliant piece of music.”

Friday and Saturday curtains for Ruddigore will be at 8 p.m. and Sunday matinees at 2 p.m. A preview performance on Thursday, June will be $12 per ticket. Regular performances are $24 for adults, $20 for seniors and $16 for students. VLOC will hold special events in conjunction with three performances, including a pre-show lecture on “Ruddigore and Melodrama” on Saturday, June 13th at 7pm, with director Helen Aberger and Felicity Ann Brown, University of Maryland’s Librarian for Theatre, Dance, and Performance Studies. Community Outreach matinees will be held on Sunday, June 14th and Saturday, June 20th at 12:45pm. These will feature pre-show backstage tours and special activities for children, and a post-show talk back with cast and crew appropriate for patrons of all ages. For further information visit the website at www.vloc.org, or call the F. Scott Fitzgerald Theatre box office at 240-314-8690.

The Victorian Lyric Opera Company is a non-profit organization founded in 1978 to perform musical works of the Victorian era. VLOC’s first show was Trial By Jury paired with Cox and Box. Since that time the company has performed every operetta in the Gilbert & Sullivan canon, most of them many times over. Lately, VLOC has branched out into other European operettas and even grand opera, such as Mozart’s The Magic Flute & Donizetti’s The Elixir of Love. The mission of the company is to provide high quality performances of light operatic works, offering educational and performance opportunities for our community. In 2011, The Victorian Lyric Opera Company merged with The Forgotten Opera Company. VLOC is a resident company at the F. Scott Fitzgerald Theatre at the Rockville Civic Center, 603 Edmonston Drive, Rockville, Md.