Theatre Review: ‘ A Tale of Two Cities’ at Synetic Theater 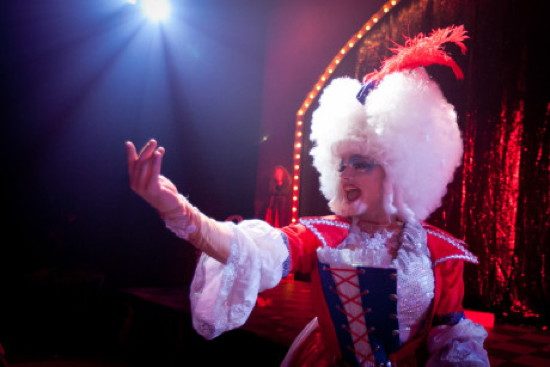 First, an advisory for Charles Dickens fans:  if you are looking for a PBS-style drama in period dress, this show is definitely not for you.  Having watched one disgruntled couple walk out after just 10 minutes of Synetic’s current production of A Tale of Two Cities (a great pity – see below) it’s important for you to know that this truly avant-garde production stretches the boundaries of art in ways that even seasoned audiences might find beyond the fringe.

The subversion here is possibly more radical than even some of Synetic’s traditional fare; but for daring audiences, the show is not to be missed.

Mind you the show does have something vaguely resembling a bustle—although it’s, you know, the sort of thing a drag queen puts on while preparing for a night onstage.

Which pretty much sums up the basic plot here.

Put it this way: if you love drag performance, and if you love shabby apartments decked out in bright feather boas, wigs, and a gorgeous claw-foot tub that doubles as a dinner table, have we got a show for you!

Dickens’ story begins, of course, in the cities of London and Paris around the time of the French Revolution.  The story of Synetic’s current production, however, begins in 1980’s New York where Everett Quinton, a founding member of the Ridiculous Theatre Company, combined his love of drag performance and a classic 1935 Hollywood version of A Tale of Two Cities, starring Ronald Colman.

It was Quinton who conceived of a one-act tour-de-force in which a drag queen, Jerry, is about to take the stage for the biggest show of his life.  But he is suddenly confronted by a baby dumped at his door; and to keep the baby occupied while he prepares for the stage Jerry performs snitches and snatches of the novel, tossing lines over his shoulder while bathing, slipping into fake breasts and buttocks (the “bustle” mentioned above) and painting the make-up on an inch thick.

Synetic veteran Alex Mills takes on the formidable role of Jerry first created by Quinton all those years ago, and it is my pleasant duty to report that he is more than up to the task.  Quinton by his own admission was a drag queen first and actor second; Mills is an actor assuming the role of a drag queen, and the results are wonderful to watch.  His performance is enhanced by Vato Tsikurishvili’s turn as the baby Dorian (note the name, a nod to Oscar Wilde’s Dorian Grey to be sure).  As ingeniously staged here by Serge Seiden, Tsikurishvili materializes on Jerry’s couch and proceeds to wreak havoc that is as hilarious as it is demonic.

Set designer Luciana Stecconi had entirely too much fun pulling together the shabby walls, vintage movie posters and fabulous wardrobe that make up the set for A Tale of Two Cities, and Irina Tsikurishvili’s choreography is generally solid.  There are some characters which materialize magically through strategic bits of costume, and costumer Kendra Rai’s work here is spot-on.  Still, she truly out-does herself with Jerry’s show-stopping (and ending) drag routine, a spectacle worth the price of admission.

Although the concept is great fun, Quinton’s script stretches an actor’s talents to the breaking point; the cast of characters is vast, and although Alex Mills is a formidable talent there are stretches where it is not clear which character is which; I suspect they will be more clearly drawn during the course of the run, and I believe finding a greater vocal variety might be tremendously helpful here.

Synetic’s A Tale of Two Cities is a fitting tribute to drag performance, which – when you get down to it – is simply an avant-garde, movement-based theatrical form that thrives on the creative subversion of traditional forms.  The subversion here is possibly more radical than even some of Synetic’s traditional fare; but for daring audiences, the show is not to be missed.

Advisory:  This production contains discreet, sexual content, one heavily soiled diaper and is recommended for ages 16 and up.