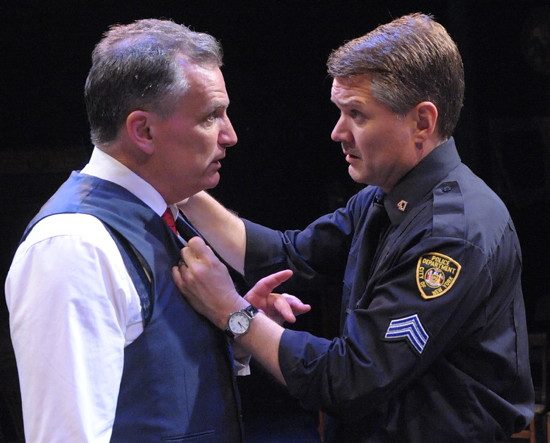 When your name is Arthur Miller, as in the Tony and other Award-wining playwright, the bar is set high. After all, he is the author of Death of a Salesman, which many consider among the greatest of American plays, as well as View from he Bridge, The Crucible, and All My Sons.

The Price, playing now at the Olney Theatre, is probably not one of Miller’s strongest works, though it does have its powerful moments and an intriguing premise. While two brothers try to dispose of their parents’ possessions—both valuable and sentimental—the play reflects on the choices people make, the prices we pay for them, and the impossibility of undoing their consequences.

…moves at a quick pace and leaves us with a lot to think and talk about.

This is certainly a resonant theme. What is amazing too is how dated the 1968 play (set two years earlier) isn’t, as anyone who has tried to empty the living space of a deceased relative can attest to. It speaks of the value of things emotionally and in terms of actual cost versus the fickle styles and the contemporary desire for disposability.

You could have heard a pin drop on opening day, Sunday, May 17, with brief forays into laughter.

The Mulitz-Gudelsky Theatre Lab is a perfect venue for the intimate four – character play, which has no change of time or place. Well, maybe I should say five “characters,” if you count the many, many props critical to the action.

Ranging from chairs to picture frames to sofas to sports equipment, these props are both spread out on the stage but also literally hanging from the rafters, suggesting the claustrophobic space of a crowded Manhattan apartment.

The central human character is Victor Franz, a police sergeant whose original ambition to be a scientist was thwarted by a lack of finances. His wife, Esther, and long-estranged brother, Walter, explain his failed dream differently, which is part of the central conflict of The Price.

Charlie Kevin is excellent at conveying the straight-arrow, chock-full-of-integrity Victor, at times to his own detriment. Yet, his performance is happily free of self-righteousness, even when he confronts his brother for sins past.

Very much in contrast is Walter, who has enjoyed so much success he can afford to give up some of its trappings. He is the more complex and to some degree self-deluded of the two brothers and as played by Sea Haberle, is both arrogant as and guilt-ridden, trying to buy his brother to make up for the past.

While Victor cries out, “It’s impossible to know what’s important,” Walter disparages his parents by declaring, “We were brought up to success. Was this really love?”

What humor there is in the play is supplied by as an almost-90-year-old appraiser and antique dealer who comes to haggle over the price of these possessions, convincingly portrayed by the much-younger Conrad Feininger. Gregory Solomon, with his Russian-Jewish accent and ingratiating manner, is both wily in his business dealings and candid as a person. He is also the voice of reality in a way that goes beyond this statement that “with used furniture you don’t get emotional.” He tries to get the characters to see and accept the limitations of their situations.

Gregory is conveniently shunted off to the bedroom during much of Act II while the brothers battle it out, but we welcome his return and laughter.

This is really a men’s play, exploring relationships between sons and fathers and between brothers. Miller hasn’t been as kind to the one female character, Esther, portrayed by the accomplished Valerie Leonard. Esther is mostly one-note, haranguing her husband for not caring enough about money, especially as he faces retirement. The men physically admire her, and there is a hint of a drinking problem that’s not spelled out. Leonard does indeed cut an attractive figure, but perhaps because of the limitations of her role, comes across a bit shrill.

In fact, the resolution between Victor and the disgruntled Esther seems forced—but that is on the playwright.

Director Michael Bloom, a recent transplant to the DC area, has used the actors and the black box space effectively. A play that might be a smidgen overlong moves at a quick pace and leaves us with a lot to think and talk about.

He has also elicited different and spot-on New York accents—based on the characters’ station in life and origins. At the same time, the long silence that opens the play as Victor goes through his parents’ apartment touching and remembering, is as eloquent as word.

The prop-heavy set was beautifully conceived and put together by scenic designer James Fouchard.

Kelsey Hunt is the costume designer. Nancy Schertler designed the lights, while Adam W. Johnson did the sound design.

Running Time: Two hours and 20 minutes, with one 15-minute intermission.

Advisory: A couple of instances of language, recommended for 14 and up.