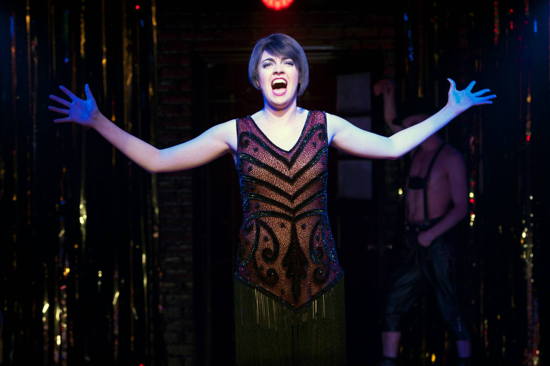 Willkommen, bienvenue, welcome to Signature Theatre’s Cabaret.  At least this is exactly what the entrancing ringleader of the story, the Emcee, (Wesley Taylor) seductively sings at the top of the opening number after a sign with the words, “Do Not Cross” written in both English and German is taken down.  And of course an announcement must be made in German telling the theatre patrons to silence all cell-phones before the show, etc.  Upon entering the theatre, the audience is automatically welcomed into a cleverly staged, 1920s Cabaret-style venue, lightly furnished with old-fashioned telephones, petite mood-lit lamps set on small round tables, some for two.  Upstage right we have an open bar available to all patrons before the show begins, and a revolving center-stage conveniently placed for scene transitions.

Raring to go at the top of the opening number, Taylor is spell-binding, seducing the audience while boldly breaking the 4th wall as he sits on an audience member’s lap, masterfully moving to a Fosse-stylized and choreographed, “Willkommen.”   Leading into a quartet of 4 instrumentalists of reeds, trombone, and trumpet on the catwalk, part of the Kit-Kat crew interacts as waiters with the audience members seated around the tables.  Exploring full sexuality, director and choreographer Matthew Gardiner gives the number, “Willkommen,” a hot fresh new vibe with the Kit-Kat Girls’ can-can set to today’s sexually promiscuous burlesque.

Signature Theatre’s Cabaret at The Max is a must-see.

After a focused opening scene introduction between Ernst (Bobby Smith), a German man who befriends Cliff when he arrives in Berlin, and Cliff (Gregory Wooddell), an American writer traveling through on a train to Berlin, we meet an older yet wiser, Fraulein Schneider (Naomi Jacobson).  Jacobson nostalgically reminisces of the good ol’ days of “living the good rich life,” and what is lost love, and money today throughout the number, “So What?” Both Jacobson and Fraulein Kost (Maria Rizzo) bring a centered, connected energy into the following scene suggesting their two very clashing lifestyles about their learned “kay sera” lives to Cliff.

Sally Bowles (Barrett Wilbert Weed), the British star singer at the Kit Kat Klub plays with a spicy “Don’t’ Tell Mama,” as she seductively plays on a stage swing centered around the Kit-Kat Girls transitioning into a solidly connected phone conversation between Sally and Cliff.  Weed delivers a witty stance throughout “Perfectly Marvelous,” as she coaxes him to dedicate his next great American novel to her, let alone spend the next few nights in his room.  Wooddell delicately displays Cliff’s inner struggle with his sexuality and exposure in finding himself as to what gender he truly is attracted to.  After kissing Cliff, Sally is fascinated by his inner-process in exploring/questioning his sexuality.

Taylor comically delivers a sexually charged “Two Ladies,” suggesting a choreographed sex scene in bed between the unconventional sexy woman and sexy man dressed as a sexy woman threesome.  As we transition into a more traditional love affair between Schneider and Herr Schultz, (RickFoucheux), an elderly Jewish fruit shop owner, in the “It Couldn’t Please Me More” (The Pineapple Song), we are introduced to the more embraced innocence in falling in true love.  Changing over into a tenderly sweet rendition of “Tomorrow Belongs to Me,” Bobby, (Kurt Boehm) vocally leads an angelic, boys a cappella-like choir suggesting darker undertones of the Nazi youth stirring up patriotism for the “fatherland,” as an overall Nazi anthem.

As the plot thickens between Cliff and Sally, we are presented with the moral issue of whether or not to abort Sally’s baby after revealing her pregnancy to Cliff.  Happily surprised about the pending new arrival, Cliff explains to Sally, “this just might be the best thing that’s happened in our lives…we are drifting but this just might be the focus we need in our lives,” which leads us into an emotional, “Maybe This Time.” Weed presents a hopeful bring-down-the-house vibrant belt, singing, “maybe this time, I’ll be lucky…maybe this time he’ll stay…”

Throughout the course of the show we continue to explore two clashing worlds of the traditional male and female couple, with the gentleman proposing to his future bride, in a free-for-all sex induced environment.  Sally, thrilled about the engagement, acts as the non-traditional matchmaker hosting an engagement party between her group of friends and Schultz’s friends and relatives.  We are also tapped into the first World War’s social-political issues of racial tension between the German and Jewish.  Rizzo leads the entire party into an emotionally passionate and intense “Tomorrow Belongs to Me (reprise)”

Act two continues with the theme of social-political tension rising in falling in love in a hopeless place filled with hate-crimes. Jacobson beautifully reveals Schneider’s complicated, involuntary disapproval of being engaged to a man partially Jewish after presented with a bittersweet metaphor, “don’t reach for the lowest apple…climb for the hardest to reach…I will catch you,” We are then exposed to a, “If You Could See Her,” sing and dance number between a gorilla and the Emcee, revealing a Jewish lady afterwards, “If you could see her through my eyes, she wouldn’t look Jewish at all.”

After an emotionally painful rendition of, “What Would You Do,” sung by Schneider, we are led into an adrenalized scene between the writer and the night-club singer, with Cliff demanding Sally into his home in the United States urging her to wake up and smell the decaying world led by social-political injustice and war.  Delivering the vocally show-stopping 11 o’clock number, Weed delivers a powerful, house-shattering, “Cabaret.”

As we journey into the end of the show, we are left with the following moral/social-political issues and underlying main theme of the show:  How do we adjust and accept our authentic selves in a socially and politically, rapidly changing unjust world filled with racial segregation?  With the minor exception of several difficulties with understanding some of the line-delivery throughout certain scenes between Sally and Cliff in the course of the show, Signature Theatre’s Cabaret presents a solid production of sexily appropriate costumes, (with costume designs by Frank Labovitz), fine music direction, (by Jon Kalbfleisch) lead by an exceptionally orchestrated band, and theatrically highlighted special effects on a tastefully presented set, (by scenic designer Misha Kachman).  Overall Matthew Gardiner conveys an air of avant-garde, cutting-edge stage directions to such an incredibly daunting undertaking, driven by a radically talented cast.  Signature Theatre’s Cabaret at The Max is a must-see.

Running Time:  Approximately two and a half hours with one fifteen minute intermission.