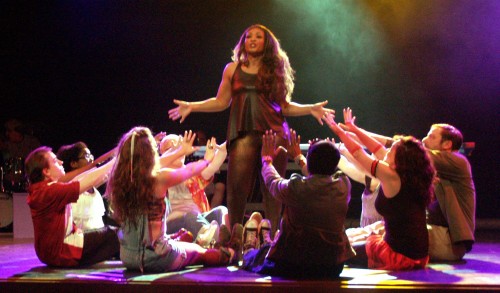 The cast of Godspell. Photo provided by Silhouette Stages.

Godspell is one of my favorite theatrical productions. Written by Stephen Schwartz this was his first musical followed by other successes such as Pippin, Wicked and Prince of Egypt. The fact that I am Jewish and the production is about Jesus’ message, has nothing to do with the fact that the music is gorgeous, Jesus’ message of peace and forgiveness is timeless, and the show is something that both the faithful and the faithless should see. Based on the Gospel of Matthew, this production opened off Broadway on May 17, 1971, and has delighted audiences on and off Broadway for decades.

The harmonies were clear, diction excellent and all of the ensemble were well cast.

Silhouette Stages’ Godspell is currently playing at the Slayton House Theater in Columbia where you can get great seats for $15-20. This was a complex undertaking by Stephen M. Deininger as there are many solo songs, lots of complicated choreography, and it relies on a strong, well trained, vocally competent ensemble. The ensemble in this production was most amazing as a group. The harmonies were clear, diction excellent and all of the ensemble were well cast.

Many songs persons over 40 will know, “Day By Day” reached number 13 on the pop billboards in 1972. Many churches sing “On the Willows,” and “All Good Gifts.” If you don’t know ALL the songs, I predict you will know many. This production begins with a video on a large screen at the back of the stage. It is showing current events: Footage of civil unrest in Ferguson, New York, Baltimore and war in Israel and Afghanistan. Reminding the audience that the message of Jesus more than 2,000 years ago, still remains the same. Peace and civility and love for our fellow-man must conquer greed, hate and anger.

Andrew Worthington’s, as Jesus, raspy quality in his voice that makes his suffering emote to the audience in songs like “Alas For You,” and the “Finale.” And might I add, Jesus, He can dance!

John the Baptist/Judah, both played by Richard Greenslit was vocally up to the challenge and animated the famous pattering duet with Jesus, “All For Best,” rocked the house. There were many magical moments and the audience understands that this company has talent galore. Samantha McEwen, for example, was worth the price of admission alone with her classic rendition of “Bless the Lord My Soul.” The other voice that clearly was exemplary was that of Taylor Washington, she was magnificent with a smile and swagger and simply brilliant. And when it came to Clare Kneebone, Taylor Washington and Samantha McEwen singing together I was in vocal nirvana. Each of the characters played many differing parts, Mary Guay Kramer, Adeline Sutter, Kory Twit, Matt Wetzel, and Thomas Ogar provided a great ensemble sound and stepped in with many solo lines and great theatrical expression.

Choreographer Katie Sheldon had a lot of work to do. Each scene was carefully blocked and the dancing was complicated. At times too complicated for some of the cast. However Mary Guay Kramer certainly was up to the shake and shimmy in her sexy performance of “Turn Back O Man,” I think she made some of the audience blush.

Music director Robin Trenner had a multigenerational funky band that embodied the love of music. What they might have missed in consistency they made up in intensity. Lighting designer Samuel Andrews provided the magic of the show, as well as the video that was integral to keeping the message of Jesus relevant. At times the lighting powered up too quickly creating glare, but mostly it was spot on. Several days later, I can’t get “On the Willows” out of my head. I hope you have the same experience.

Advisory: All ages over 6.