Theatre Review: ‘Jacques Brel is Alive and Well and Living in Paris’ at Spotlighters Theatre 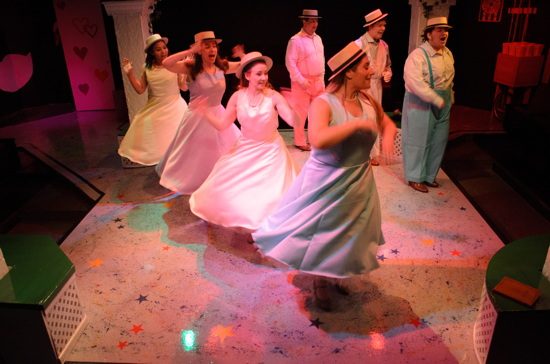 The cast of Jacques Brel. Photo by CMAldridge Photography.

Spotlighters’ production of Jacques Brel is Alive and Well and Living in Paris is a vivid tour through the passionate and mirthful soul of post-war Belgiam.  Director/Choreographer Timoth David Copney has assembled a strong cast, and together they offer the audience a masterclass in musical theater.

The real Jacques Brel had a long recording career and died in 1978 at only 49 years old.  He did not write for the theater, but two of his admirers, Eric Blau and Mor Shuman, remedied that in 1968 with the Off-Broadway premier of Jacques Brel is Alive and Well and Living in Paris.  The show is a revue of around two dozen of Brel’s songs translated into English, with characters that have only thematic continuity from song to song and with only the barest hint of being set at a carnival in Brussels.

Brel’s melodies are deceptively simple, sometimes based on a motif that is only one or two bars long, and sometimes consisting of longer phrases using only one or two notes.  After the tune is firmly planted in your head, however, Brel slowly ratchets up the intensity through musical repetition and lyrical expansion until the tune that first seemed like a child’s nursery rhyme turns into something much more: sometimes a desperate mantra, sometimes a slapstick punchline.

Director/Choreographer Timoth David Copney has assembled a strong cast, and together they offer the audience a masterclass in musical theater.

An example of the latter humor is “I Loved,” sung by clear-eyed, clear-voiced Lauren Schein.  The narrator reminisces about a lost love, evoking all of the remembered laughter and grief of one who cannot let go of the past.  It is not until the final lyric that she shyly confesses, “You see, I’ve forgotten your name,” and we discover that even the grief is now just a happy memory of distant, younger time.

Death is a frequent theme in Brel’s songs, which should not be surprising from someone who was nine years old when the Nazis invaded his country.  “Sons Of,” sung by a confident and evocative Kerry Brady, sounds like a lullaby of hope for one’s children until we hear her sing “Some went to war; Some never came home.”  In “The Bulls,” Connor Moore, who is a stunningly mature performer for a high school junior, draws direct parallels between bullfights and battlefield slaughter.

My personal favorite is “Amsterdam,” sung by the smooth and brooding Darren McGregor as a sailor in port.  He tells of the colorful types who inhabit the town, eventually descending into a level of debauchery that disgusts and terrifies even a hardened sailor.

According to audience reaction, the favorite performance was delivered by the engaging and talented Mallorie Kristoffersen, who delivered a heart-breakingly tender rendition of “Marieke.”  Michael W. Tan played some of the more comedic roles with sweetness and earnest humor, along with a soaring tenor voice.  Beth Weber’s dynamic performance in “Carusel” just before the end of the show made me wish she had been handed the lead more frequently, though she was terrific in her many supporting roles.

The small orchestra played well, and the Musical Director (the same Michael W. Tan) succeeded in reflecting the many modulations of emotions both apparent and hiding beneath the surface on stage.  Lighting Designer Fuzz Roark was equally sensitive in depicting an apt range of moods, and Costumer Laura Nicholson helped tremendously in establishing both the characters and the setting while sticking with the whimsical base colors of a carnival atmosphere.

Any one of the musical numbers in this show could be the highlight of its own independent musical, so the overall effect can be exhausting.  But director Copney and this talented cast deliver a wonderful production that makes you wish the carnival would never end.

Jacques Brell is Alive and Well and Living in Paris runs through May 24, 2015 at at The Audrey Herman Spotlighters Theatre, 817 N. Saint Paul Street, Baltimore, MD. For tickets call the box office at (410) 752-1225, or purchase them online.