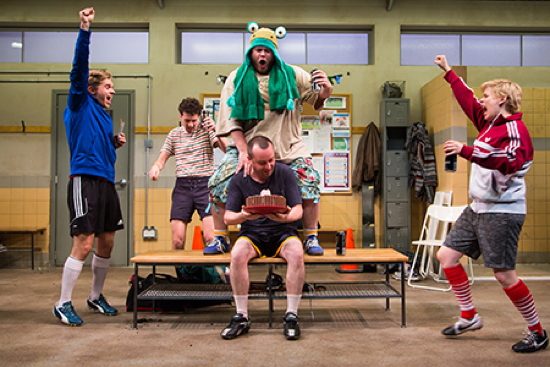 Plays focusing on a brief window in time, a few characters and a single subject must rely heavily on three things for a good production: the writing, the director’s vision and the actors. Jumpers For Goalposts at Studio Theatre, written by Tom Wells and directed by Matt Torney, has all three in ample amounts!  It is a hands-down terrific production of a charming script.

…everything comes together for a championship theater experience.

Jumpers is simple in premise: a group of 5 ragtag people from Northern England who come together to form a football (or soccer for us Americans) team in their local LGBT pub soccer league. Their team’s name, Barely Athletic, describes the one thing they all have in common. All the scenes take place in a rundown locker room (astonishingly realistically designed by Debra Booth) each week after the Sunday game. This is the window through which the audience gets to know each character, learns their reasons for playing and eventually realizes that playing football every week is not the only thing that keeps this group together.

Each character is completely lovable and layered in distinct ways, so getting to know each one is a joy.

Kimberly Gilbert plays Viv, a lesbian pub owner with the most determination to end the season in 1st place and bring home the trophy (the trophy she bought herself, by the way). Gilbert’s Viv is a brash, loud and fast-talking woman who settles into her character as soon as she walks on the stage.  Gilbert’s working class British accent is great, and she easily and naturally carries the interactions of the all the characters along.

Michael Glenn plays Joe, a relativity young widower whose deceased wife was was also Viv’s sister.  Joe is the “Token Straight” person on the team, and he  discovers that he has a thing or two to teach Viv about the grieving process.

Jonathan Judge-Russo is “Beardy” Geoff, a basically fun loving and idiosyncratic gay man who is dealing with a trauma from his past. Judge-Russo’s Geoff is funny, kind, hopeful and is so open and vulnerable, I could not help but root for him to shake off his last doubts and embrace the world again.

Zdenko Martin as Danny is the second-in-command on the Barely Athletic football team, and he is the closest thing they have to an actual athlete. Danny has a secret that he hasn’t shared with anyone except Geoff, and  as a romance blossoms with teammate Luke, Danny struggles with how to reveal the unhappy facts to Luke. Martin is adorable as Danny, exactly what I would expect from a young man with an huge crush. With his slightly shy looks and winsome smiles, Martin inhabits Danny seamlessly.

Liam Forde plays Luke, the least athletic person on the team and works in a library in a small village. Forde is terrific playing this nerdy, kind and intelligent young man who has some adorable problems with opening doors. Luke keeps a diary, and through most of the show the only entries we learn of are decidedly boring, such as, “Today I ate a sandwich.”  But when he finally shares an entire entry, out comes one of the best descriptions of love I have ever heard. I was completely blown away by the amazing writing! And Forde delivers the lines very believably, right from his heart.

This play is a gem. We in the DC Metro area are very fortunate to have the opportunity to see this U.S. premier production where everything comes together for a championship theater experience.