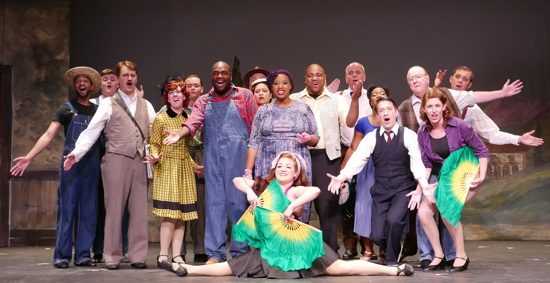 The cast of ‘Kiss Me, Kate.” Photo by Nate Jackson Photography.

If you’re in the mood for an evening of classic musical magic with a dash of mid-century nostalgia and a solid helping of Shakespearean double-entendres, check out 2nd Star Productions’ Kiss Me, Kate. Kiss Me, Kate is a singing, dancing sensation featuring a strong supporting cast and stellar performances by its lead actors.

I admit my ignorance upfront— I wasn’t very familiar with the show before this production. I knew William Shakespeare’s The Taming of the Shrew was somehow involved, and I figured that the eponymous Kate would probably refuse to kiss someone in the first act, only to end up kissing him by the end of the second act. The story follows the tumultuous relationship of ex-husband and wife Fred and Lilli, brought together again for a production of The Taming of the Shrew where they play the feuding Petruchio and Kate. Throw in an ingénue of questionable fidelity, her hapless but loveable paramour, a couple of gangsters, and the show is rife with comedic potential.

Those unfamiliar with the plotline will probably recognize much of Cole Porter’s catchy score. Songs like “Another Op’nin’, Another Show” and “Wunderbar” became popular beyond their original context. Case in point: I remember a particular family road trip when my father sang “Wunderbar” all the way up and down the Smoky Mountains. However, his rendition consisted of just singing the word “wunderbar” over and over for each verse.

The actors deliver the comedy in proverbial spades. Brenda D. Parker’s Lilli is at her absolute best when playing an untamed shrew. Brian Binney’s Fred is a great combination of loose-limbed awkwardness and shameless bravado. Amy Greco is charming as the sultry and surprisingly savvy Lois Lane.

Highlights in the supporting cast include Josh Hampton and Michael Iacone as a pair of gangsters with a flair for the dramatic. Their “Brush Up Your Shakespeare” is a hilarious tour-de-force of euphemisms involving the titles of Shakespeare’s plays. (Tip: keep an ear out for a pretty spectacular Coriolanus pun.) Aerika Saxe, as Hattie, opens the first act with a fantastic vocal bang in “Another Op’nin’, Another Show.” Jared Shamberger, as Paul, does the same for the second act with “Too Darn Hot.”

The costumes, designed by Linda Swann, are tons of fun. I saw a number of pieces I’d like to add to my own closet, from Lilli’s gorgeous sky-blue dressing gown to Kate’s fabulous red, black, and white striped dress in the final scene.

A word on that final scene, however. The ending, like the ending of The Taming of the Shrew, comes as a bit of a disappointment if you’re expecting Lilli/Kate’s shrew-iness (or shrewdness, depending on how you see it) to win out. The final moment lacks the sort of tongue-in-cheek humor that works so well in previous scenes. However, it’s possible that in the razzle-dazzle of the closing number, I might have missed a telltale wink at the audience to suggest that the ending is not quite as sweet as it seems.

With its catchy, nostalgic score, 2nd Star’s Kiss Me, Kate features an energetic, well-rounded cast. At just under three hours, the show runs a little on the long side for a hot summer night, but you can expect an evening of good, (mostly) clean fun.