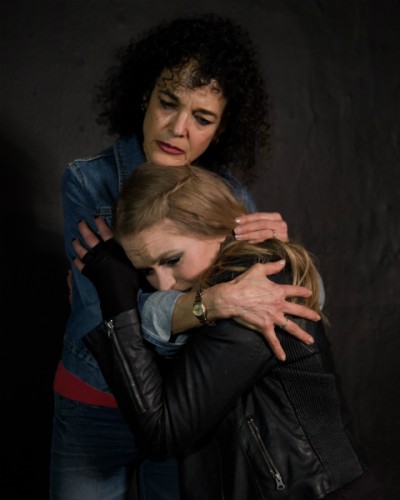 Katherine Lyons and Casey Dutt grieve for a departed soldier in “Last of the Boys”. Photo courtesy of FPCT.

The Vietnam War was a difficult and controversial event in American history. Young men died by the thousands, surrounded by enemies, half a world away from their homes. And sending them there was Robert McNamara, Secretary of Defense from 1961-1968. In Last of the Boys, now playing at Fells Point Corner Theatre, a war widow, a young woman, and two Vietnam veterans try to understand the choices he made, and their own lives.

Jeeter (Tony Colavito) returns from Ben’s (Mark Squirek) father’s funeral, which Ben has not attended, to Ben’s lonely home in the middle of an abandoned trailer park. He brings with him a young woman named Salyer (Casey Dutt), who in turn leads her mother (Katherine Lyons) there. In this forlorn spot in the middle of California, the past rises up against them as if in a fog, and ghosts–most prominently, a dead soldier, and McNamara himself–emerge to relive the past.

Director Barry Feinstein has once again managed to make a deeply distressing and controversial subject palpable to the audience. There are moments in the play that are almost eerie, uncanny, and it reaches across the stage into the seats, as if to demonstrate the overwhelming fear of the unknown once faced by soldiers overseas. Though there are occasional blackouts, these are punctuated by noises of helicopters, gunfire, and jungle. A projected newsreel of an interview conducted by McNamara becomes unusually affecting when Mark Squirek dons the same suit, and emulates his words in measured tones, becoming increasingly more unhinged as the play progresses.

Colavito’s Jeeter, on the other hand, seems to embody the epitome of his age–the aging hippy, complete with bandana, vest, and obsession with drugs, spirituality, and counterculture. His ability to step back from it all is in stark contrast to his girlfriend Sal’s obsession, which has escalated to the point that she has tattooed the Vietnam War Memorial on her body. The revelation of this fact, when Sal strips to reveal the names etched across her back, is deeply moving.

Equally powerful is the supporting cast that surrounds these three figures–Sal’s mother Lorraine (Lyons), and an unknown soldier credited only as “Young Soldier,” played by Adam Zoellner. As Lorraine, Lyons is able to evoke exactly the feeling of those left behind, combining resentment and grief into authentic performance. Zoellner, though his role has few words, frequently draws attention, saying much by saying little–he embodies the definitive victim of the war, and his stalwart presence at the side of Squirek’s McNamara is an omnipresent reminder of that.

Maya Lin, designer of the Vietnam Veterans Memorial Wall, envisioned a wound cut into the face of the earth, and for many people the war feels that way in memory. Playwright Steven Dietz’s work, by letting that wound bleed a little, draws attention to the different ways people experience history, and how wounds are repaired.

Last of the Boys is playing at Fells Point Corner Theatre at 251 South Ann St, Baltimore, MD, through June 7, 2015. For tickets click here.