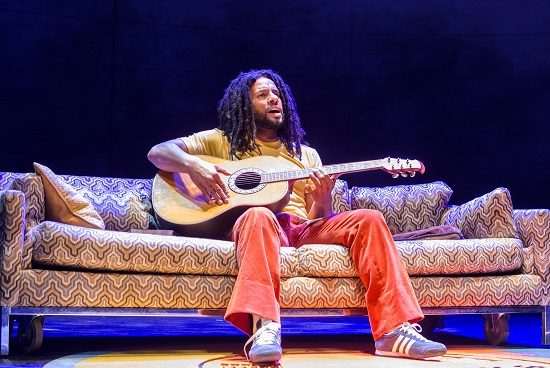 Center Stage’s 2014/2015 season comes to a close with the world premier production of the new musical Marley, which weaves together the life and songs of reggae music legend Bob Marley. The lobby of the theater has been transformed with a dirt floor, a Jamaican shanty town, domino players, performances and dancing by ensemble members beginning 30 minutes before the show. Posters for the two opposing Jamaican political candidates Michael Manley and Edward Seaga line the walls and show the divisions in the country.

From the raising of the proverbial curtain to the jammin’ hand-clapping celebratory concert at the conclusion, the audience is treated to a simply thrilling theatrical experience thanks to superb direction, outstanding lead performers, a talented energetic ensemble and a technical crew that is exceptional.

Rather than covering Marley from his birth in 1945 to his untimely death from cancer in 1981 at age 36 the show focuses on a period when his career exploded. It is bracketed by the 1976 “Smile Jamaica” concert before which he was almost assassinated and the 1978 “One Love Peace” concert, which followed a two-year self-exile to London where much introspection occurred.

The varied threads of Marley’s life are shown to varying degrees including the Rastafari spiritual beliefs that guided him and reggae music that he took to new heights of popularity. Other threads such as his love of football (soccer) and his womanizing with 13 children by 9 women are only hinted at.

Marley features music and lyrics by Bob Marley and a book by Center Stage’s artistic director Kwame Kwei-Armah who is also the skillful director of this high-energy production and is the creative force in bringing the show to Baltimore.

If you are not a fan of Robert Nesta Marley or even reggae music, after experiencing Marley, it is likely you will be.

Mitchell Brunings, making his stage debut, brings Bob Marley to life with a strong voice and laid back attitude.  His mannerisms and movements—even when he dances during his vocal performances—was Bob Marley reincarnated.  Taking the lead in nearly thirty songs, the show shines brightest when Mr. Brunings is singing such classic numbers as “No More Trouble,” “Revolution,” “War,” “Them Belly Full,” “One Love,” “Jammin’” and “Redemption Song.”

Musical Director Jason Webb and his nine-piece orchestra positioned above the stage did a wonderful job of keeping the beats and melodies in sync with the performers’ vocals.

Saycon Sengbloh as Rita Marley and Michaela Waters as Cindy Breakspeare both give strong performances as the women at home and in exile in his life. Howard W. Overshown as Michael Manley, Don Guillory as manager Don Taylor, and John Patrick Hayden as record producer Don Taylor all had noteworthy performances as did the large and talented cast as a whole, making use of the entire theatre from back to front to balcony to interact with the audience.

Other stars of the show besides the director and the Mr. Brunings are those comprising the entire artistic team.  The set by Neil Patel features a large revolving record with three movable walls on which Projection Designer Alex Koch’s graphics comes to life. The projection effects are truly spectacular, offering representative glimpses of the grimy neighborhoods in and around the Jamaican city of Kingston, shots of newspaper headlines, recording studios, buildings and various other images, which add a significant amount of texture to the musical.

Outstanding lighting by Michelle Habek whose rich hues bathe the stage in fiery reds, blues as well as other pastels and shades plus clear resonating sound by Shane Rettig made for a top-notch concert experience.

Bob Marley’s star has not diminished in the over 30 years since his untimely death. In fact, the Rock and Roll Hall of Famer’s Facebook page is among the top 15 of all Facebook pages with over 73 million Likes.

The music Bob Marley created still has the audience dancing in the aisles at Center Stage and his message of peace and social justice echoes in the streets of Baltimore today.

Advisory: The play contains violence and profanity and is not suitable for children.