Theatre Review: ‘Rosencrantz And Guildenstern’ Are Dead at Folger Theatre 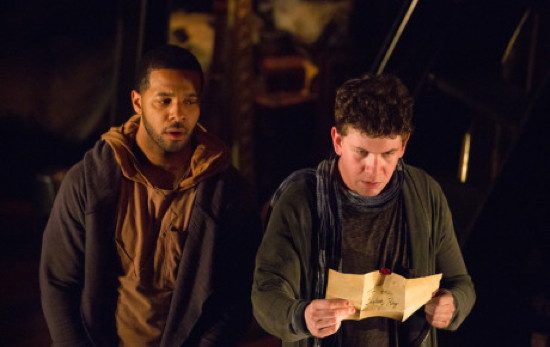 Ever have that sinking feeling that you have no idea who you are, or what on earth you’re supposed to do?  Ever found yourself hoping that someone would just magically materialize – poof – and hand The Meaning Of Life to you on a silver platter?

At this point in the review, critics usually start waxing philosophical about Tom Stoppard’s masterpiece Rosencrantz And Guildenstern Are Dead with pithy nostrums about existentialist angst, absurdism and blahblah—and kill the sheer fun of the play.  So much academic nonsense has been written about the play that it’s easy to forget Tom Stoppard, who tossed this off on a dare in his 20’s, was as playful a dramatist as any you’d care to meet.  He actually wanted you to enjoy yourself, as rare a concept as that seems to be sometimes.

…a rip-roaring good time, pulling out all the stops…

Fortunately for audiences at the current Folger Theatre production of Rosencrantz & Guildenstern, Director Aaron Posner doesn’t burden us with God, Man & The Universe, as so often happens with productions of modern classics.  Instead he gives us a rip-roaring good time, pulling out all the stops and putting all the wild philosophical speculations of its characters in the circular file where they belong.

The play begins with our two anti-heroes killing time, flipping coins—which always seem to land “heads.”  Guildenstern, the inveterate brainiac of the two, proceeds to pontificate while his buddy Rosencrantz’s eyes glaze over (like much of the audience).  Stoppard has clearly endured BS artists of this sort, and takes such a dim view of them that he gives Guildenstern numerous opportunities throughout the evening to make a complete jackass of himself.  Fortunately Adam Wesley Brown is completely at home in the role of Guildenstern; his timing and deadpan delivery elicited derisive giggles the whole night.

Of course, at some point R&G eventually discover their purpose; and when they do, Posner’s sound and light designers, Eric Shimelonis and Thom Weaver, team up to create a brilliant and instantaneous scene shift, creating a stark contrast between the warm glow of R&G’s ‘waiting room’ and the harsh, fluorescent glare of the world of Hamlet into which they are thrown.

Accompanying Rosencrantz and Guildenstern on their mission to Elsinore is a company of actors, headed here by Ian Merrill Peakes as the positively brilliant, bawdy and authoritative Player.  Like R&G the players are utterly lost without roles to play, and like R&G they’re on the lookout for the slightest hint of a gig, and their desperation has a truly comic side.

In the world of Hamlet, of course, the players are commissioned to do a rip-off of an Italian tragedy which – as Stoppard vividly reminds us – ends very badly.  Posner’s masterstroke is to show this hapless troupe trying to rehearse the Dumb Show for “The Murder of Gonzago,” which is marred by misbegotten sound cues, lousy blocking, etc.  The ensemble works brilliantly together, and their gifts for physical comedy are generously shared all around.

The “straight” cast, headed by Biko Eisen-Martin’s Hamlet, is suitably dignified and Posner sees to it that the Melancholy Dane & Co. occupy an entirely different world, even when they share the stage with Rosencrantz and Guildenstern.  The subtle boost in voltage that comes from being “real” people distinguishes the royal family and contrasts them with the decidedly laid-back, low-voltage approach to life offered by the show’s title characters.

Paige Hathaway has decked out the tiny Folger space with the bric-a-brac of the theatre, creating the effect of an attic (or a barn) where every item, every floorboard is simply waiting for a role to play.  Chairs hung from the walls, a barrel of broadswords, even a couple of nonchalantly-hung nooses, speak to the ephemeral nature of the stage but are also likely to evoke nostalgia for productions where we have seen them in action.  Helen Q. Huang, meanwhile, has created a costume scheme that harmonizes with this sense of bric-a-brac for R&G and the players, contrasted with the glamour and style of the Danish court.

Posner has created an evening so packed with zaniness and broad contrasts, all within the girdle of the Folger’s walls.  If you haven’t got a clue what you’re supposed to do tonight, I strongly advise you to check out this production.

Running Time:  2 hours and 15 minutes, with one intermission.