Theatre Review: ‘The King and I’ at Memorial Players 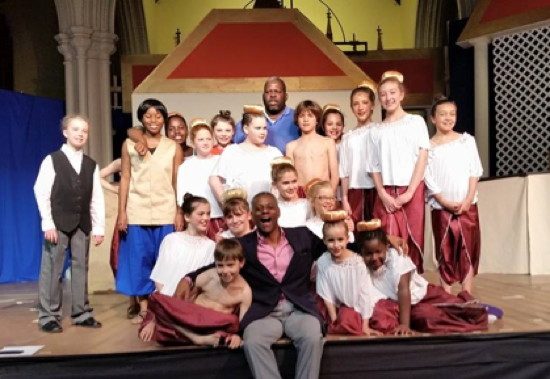 Memorial Players’ presents the grand musical The King and I, written in 1951 by the famous team Richard Rodgers and Oscar Hammerstein II and based on the 1944 novel Anna and the King of Siam by Margaret Landon. Director Jesse Milan, Jr. and the entire Memorial Players’ cast enthusiastically transports the audience to the exotic world of Siam in the 1860s.

The play opens with the arrival in Siam of Welsh widow and schoolteacher Anna Leonowens and her young son, Louis. Anna has traveled from England to serve as teacher to the King of Siam’s many children and, it turns out, their mothers too. To be exact, the King has 67 children at the time of Anna’s arrival, but he is quick to add that he “got a late start.”

Why go all the way to Broadway to catch the revival when you can go around the corner to the Memorial Player’s terrific production of The King and I?

Anna is part of the King plan to modernize Siam, but the clash of Eastern and Western culture is played out in the personality clashes between Anna and the King. She demands that he fulfill his contractual promise to give her and Louis a private residence outside the palace, but the mighty King feels no obligation to negotiate with a servant and, perhaps worse, a mere woman.

A diplomatic emergency provides the opportunity for the two to work toward a common purpose. It has been reported in England that the King is a barbarian, and a diplomatic mission is on the way to Siam to assess the situation. The King believes the British are prepared to take over Siam if the mission goes poorly. Anna saves the day by proposing and planning a Western-style banquet to dispel the diplomats’ concerns, all the while going along with the King’s pretense that the idea was all his. The banquet proves a diplomatic success, even as it provides many humorous and even poignant moments as the Siamese struggle to don a foreign culture for the night.

Megan Dimmock plays Anna Leonowens with a strong character and an even stronger, clear voice. Many of the well known songs from The King and I are sung by Anna, including “Whistle A Happy Tune,” “Getting to Know You,” and “Shall We Dance.” Dimmock nails each and every one of them, never wavering on energy and volume.

Harold Gregory Martin is the King of Siam, and Martin’s playful personality came out in the song “A Puzzlement,” just as his serious, kingly side was shown in “Song of the King.” Martin easily filled the stage with his regal presence, and he did a wonderful job balancing his affection for his wives and his children with his need to rule and command all in his realm.

Cheryl J. Campo as Lady Thiang is amazing in her role as the funny, good-natured favorite wife to the King. Campo is very comfortable and natural on stage and her voice is truly beautiful. A show stealer was her rendition of “Something Wonderful.”

Autumn Boyle as Tuptim, a slave brought from Burma to be one of the King’s wives, sang with a clear and strong voice. Tuptim is secretly in love with Lun Tha, a Burmese scholar and envoy, played by a very handsome Jeff Tegeler.

Ruby Webb, as Anna’s young son Louis, fearlessly played a boy in a strange land and never wavered in character or voice.

Prince Chulalongkorn, the Kings oldest son and heir, is played by Paris Weeks, a high school senior with terrific charisma. She attained great character balance as a headstrong young man who must face the burden of succeeding to the throne of Siam by the play’s end.

Both Terry O’Hara, who plays British diplomat Sir Edward Ramsey, and Bill Roberts, who plays Kralahome the King’s prime minister, portray their characters for laughs and get tons of them whenever they walk on stage.

All of the many wives and royal children were darling in their costumes. The only sad thing about this production is that the children and wives were not on the stage more!

The live 12-piece orchestra, conducted by Joon Hyuk Andrew Choi, played well and kept the show moving along at a fantastic pace.

Why go all the way to Broadway to catch the revival when you can go around the corner to the Memorial Player’s terrific production of The King and I?

The King and I runs through May 9, 2015 at Memorial Episcopal Church, 1407 Bolton Street, Baltimore, MD 21217. Admission is free, for more information click here.