Theatre Review: ‘The Letters’ at MetroStage 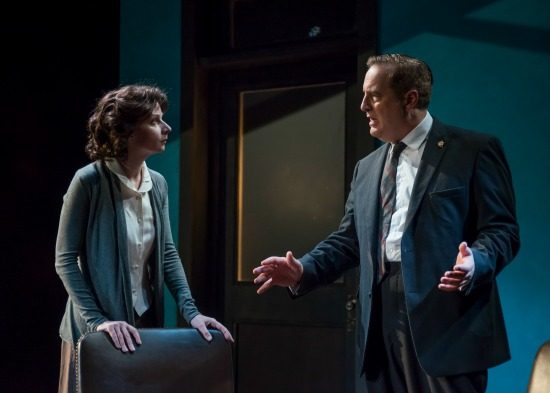 Two actors in a relentless cat and mouse exchange, unexpected plot changes, and an emotional roller coaster makes for a masterful psychological thriller in The Letters at Alexandria’s MetroStage.

This taut, tense drama was created by John W. Lowell and first staged in Los Angeles in 2009. It is its ninth production, and though written more than 15 years from today, it inherently retains a  timeless quality.  It is brief 80 minute show, but one could not take much more in a single riveting sitting. Echoing the themes of an overbearing big brother type fascist state, it is set in the 1930s Soviet Union, in their generalized Ministry of Cultural Purity.

Anna, played by Susan Lynskey is a demure, mousy-haired bureaucrat underling who has been called into the office of her superior, known only as The Director, played by Michael Russotto. She is a bundle of nerves, wary and uncertain as she tries to figure out the reason for the meeting.

Lowell sets up a case study in psychological probing, the art of setting up a false premise to observe a person’s reaction to it unprepared, without a standard answer. When asked why she never remarried, Anna states stoically “For awhile, solitude suited me. I was wrong.” Later the probing centers on her work and colleagues.

The Director is not your usual drone apparatchik—he is energetic, even manic, reminiscent of a crazed clown, bouncing around the office chatting about anything that pops into his head.  What is the hidden agenda? What started as an interview turns into an interrogation.

Gradually, the details begins to emerge. Anna’s group is editing the writings of prominent artists, on orders of the state. The salacious letters of a famous composer (likely Tchaikovsky) are missing. A colleague has been arrested. Suspicions are being directed at Anna. What follows is a tense verbal and psychological joust between the two.  Lowell’s rapid-fire, sharp dialogue made the scenes dance. The Director fires back “I decide between the sound of desperate truth or the sound of desperate lies.”

Anna, recovering from the verbal onslaught, stands up to him and intones: ‘You are right for all this if this is all you are.’

She later proves adept in the game of machinations.  ‘The most important thing is the success of the rumor, how it makes the scandal grow.”

The set design by Giorgos Tsappas nicely enhances the action.  The stage is composed of stark hues of melded red and brown.  Harshly functional office furniture adorns the stage, finished off by a framed wood structure perched above the action. This obelisk could be a skylight, or an off kilter prism into the proceedings.

Director John Vreeke has worked numerous times with local talent Russotto and Lynskey and the familiarity shows. The pacing for the show is crucial, and the actors naturally played the rhythm of the show, while embracing the few moments of silence, which were powerful. From Russotto’s energetic machinations to Lynskey’s internal glances, wonderful work between both.

And because it was written and produced in an everyman point of view, it keeps a timeless quality, given our recent era of a loss of individual freedoms, coupled with insidious higher forces coming into one’s life. A wonderful Kafkaesque situation where reality is being reshaped before our eyes. Could it happen here?

Running Time: 1 hour and 20 minutes without an intermission.