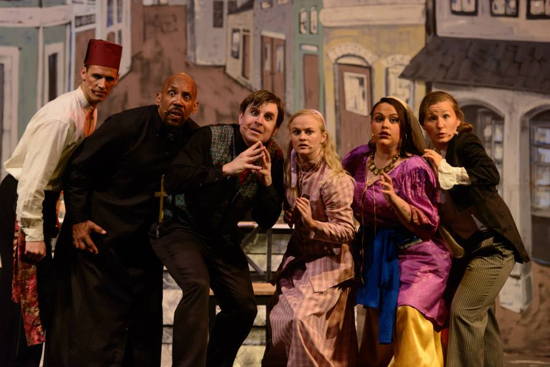 On May 28, the Annapolis Summer Garden Theatre kicked off their 50th outdoor-season with a lighthearted rendition of Rupert Holmes’ The Mystery of Edwin Drood. This feel-good, contemporary comedy – directed by Maryland native, Andy Scott – is loosely based on Charles Dickens’ unfinished novel of the same name. The musical, complete with lyrics, music and scripture by Holmes, features an upbeat cast that is as interactive with the audience as they are with each other.

The show, set in Victorian England, centers around the life and disappearance of Edwin Drood, played by Emily Lentz. Edwin is betrothed to the lovely Rosa Bud, played by Paige Miller, however Rosa is also the object of most of the other characters’ affection. Is jealousy from the other characters, such as Edwin’s uncle, John Jasper, played by David Merrill, a reason for his disappearance? Throughout the show, the audience is faced with the ultimate question: Is Edwin Drood dead? And if so, who killed him?

However, given that Dickens’ novel is unfinished, even the characters cannot answer those questions. Holmes strategically pokes fun of the guarded nature of Victorian England by incorporating an element of spontaneity within the musical. Meaning, The Mystery of Edwin Drood can end in dozens of different ways, based upon the vote of each distinct audience.

With that said, interaction between the cast and the audience is an important facet to the success of this show. Characters such as Durdles, played by Ethan Goldberg, and Neville Landless, played by DJ Wojciehowski, can be seen chatting up the audience (in character and hilariously off-book) before the start of each show and throughout intermission. Definitely make sure to be seated at least 15 minutes prior to curtain to engage the cast in hilariously basic discussions about the merits of modern-day society, or something of the sort.

As a cast, the actors perform phenomenally. They bring each character to life, and their sheer commitment to the success of the musical is evident throughout. As Princess Puffer, Maribeth Vogel’s soulful rendition of “The Wages of Sin” nearly brings down the house. Furthermore, Goldberg’s rendition of the always drunk (but still always happy) Durdles reminds the audience to find joy in the simple facets of life.

The most fantastic duo from the musical, however, ultimately derives from the relationship between Edwin and Rosa. I was captivated by the twosome with their rendition of “Perfect Strangers,” a song that illustrates the thought-process, confusion and insecurity of a young couple betrothed to each other in an upcoming, arranged marriage.

The set designer, Matt Mitchell, and lighting designer, Drew Fox, skillfully crafted the set with various Victorian-esque backdrops, artificial and natural lighting. Since the Annapolis Summer Garden Theatre is outdoors, the natural lighting transitions from dusk to dark, which adds an element of mystery to the already perplexing disappearance of Edwin Drood.

The orchestra, although slightly too loud at times, performs impressively with the cast. Ken Kimble conducts an unseen, behind-the-scenes orchestra in such a way that the instruments can often change the ambiance of the theatre when the scenery cannot.

Albeit a few stumbled-upon lines, the cast performs delightfully under the direction of Andy Scott. The Mystery of Edwin Drood incorporates a great cast with beautiful vocals to ensure that, when all is said and done, I think the majority of the audience drove home with smiles plastered upon their faces. At least I know that I did.

Advisory: The musical contains some language and minimal profanity.